Patrick: Violence. Abuse. Torture. Slavery. I just named, like, the four worst things in the world. They’re all awful on their own, but each act becomes unfathomably detestable the second you add the descriptor “sexual.” Sexual violence is so horrible, we don’t really know how to process it and we sure as shit don’t know how to talk about it. As a result, so much sexual assault gets swept out of our field of vision, even when we know full-well that it’s going on. The numbers vary wildly, but every study on reporting rape statistics suggests that a shocking number of sexual assaults go unreported. Studies also show that sexual assault, especially toward children, can trigger psychosis and schizophrenia later in life. It’s simply too much for brains to handle, which is why we tend to freak out whenever rape shows up in our pop entertainments. Ales Kot and Tonči Zonjić boldly express our inability to process these moments of pure, unadulterated horror in a breathtaking new installment of Zero. (spoilers for Zero 9 after the jump).

Let’s try to shake our sillies out now because we’re not about to have a lot of fun discussing this issue. For as much of a shit as Zizek has been to Zero throughout the series, there’s always been an on-going thread of humanity that makes him seem like something more than our hero’s heartless handler. I hadn’t been able to exactly pin point it earlier, but we’ve been watching a lot of guilt expressing itself in his actions. This issue takes us back to Zizek’s arms dealin’ days, and puts a frustratingly human face on his loss of innocence.

Well, let’s not go nuts declaring that anyone is too “innocent” here. We open on a card game, where one of the players articulates Roman’s role with an almost cool brevity.

I know that “scuzzy arms dealer” is no one’s archetype of cool, but it’s hard not to feel like Zizek is masterfully gaming the system here. His horrible friends seem to think so, anyway. They call him Superman, they call him James Bond, because that’s what we want to think our heroes are — good to a point that’s beyond reproach. But Zizek is a part of this world, which means that he gets called up to these awful weekends in at the Villa. While he’s there, his hosts show him a video of his pregnant girlfriend being raped by other visitors to the Villa, and that forces Zizek to action.

The text isn’t 100% clear on this, but it’s implied that Roman is not the father of Marina’s baby. Whether it’s justified or not, that does cast his relationship with her in a more heroic light – he’s not a victim of circumstance, stuck with a child, but a willing participant in the life of an unborn baby. Their love is portrayed as idyllic, literally presented through a rose-tinted color scheme, expertly deployed by colorist Jordie Bellaire.

This kind of distortion is at the heart of what this issue expresses so elegantly. These are formative years for Zizek, but for as much impact as the events of the issue have on his psyche, what we’re presented with is not particularly clear, reliable or focused. In fact, no matter what other action Zonjić depicts throughout the issue, the imagery associated with the story’s climax persistently butts in where it’s unwelcome. As Marina and Roman make a break for it, his warlord buddies catch up to them, hold them at gun point and force Roman to make the worst choice imaginable: either they kill Marina, or they kill the baby inside her. Roman begs and pleads, but ultimately Marina tells him to take the baby. Zonjić shows how heartrending this decision — and the action required to carry out this decision — is by distorting the landscape behind Roman until it’s nothing more than chunky black strokes of a paint brush.

We’ve seen those strokes before; earlier in the issue, Roman is playing cards — presumably at a less traumatic gathering with his war bros — and the camera drifts away, out through a bullet hole in the window, through a desolated playground and into the dark, abstracted woods. On my first read, I though this was simply characteristically effective imagery, but Kot and Zonjić are doing so much more than scene painting and foreshadowing here. The moment that this whole issue drives toward is so big and so horrific that the image creeps in to even the more benign parts of Zizek’s memories. How can he pretend he was playing a fun had of poker when that chunky, inky wood was right outside his window the whole time. 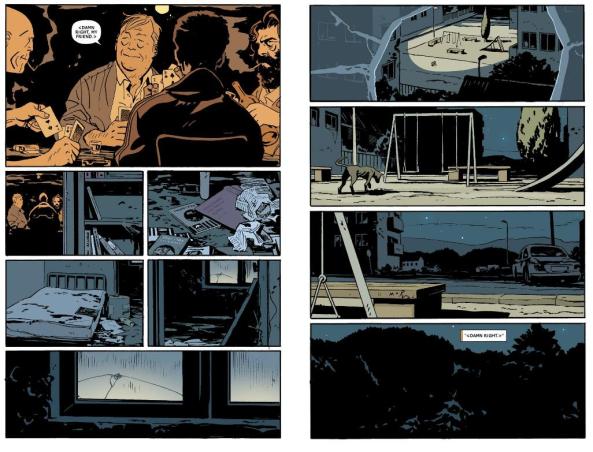 It’s some heavy shit, but Kot and Zonjić give the subject matter so much space to just sit there and be effective, so I think that it works. The issue ends with two pages of blackness, the first with a white gutter, and the second without. We’ve brought it up here a couple times, but Scott McCloud’s Understand Comics posits that the gutter is where the work of the storyteller ends and the work of the reader begins — that white space bordering the pages allows your imagination fill in the gaps. The freedom presented by the gutter on the first of those two black pages is a trick: the idea that we can or should imagine past the moment we just witnessed is absurd. The next page corrects that, again with solid blackness.

As a sort of epilogue, Kot offers the following statistic: “Estimates for the total number of women raped during the Bosnian War range from 20,000 to 50,000.” In researching rape statistic for this piece, I ran into sources that even say as many as 60,000 women were raped in the conflict. Taylor, this is one of the more serious subjects this series has tackled, and while I feel that the creative team approached it with appropriate gravitas and emotional depth, I could see someone make the argument that the climax is emotionally manipulative — almost a damn Sophie’s Choice. I mean, Marina is basically fridged in this issue, is she not? What do you think – is the gravity of this issue earned?

Taylor: That’s a really tough question, Patrick. As your introduction said, talking about the issue of sexual abuse is always hard and because of that I feel the subject itself carries its own gravitas. Unfortunately, that doesn’t mean the conversation is always tasteful. I think Kot does explore the issue with enough subtlety to lend the issue an air of seriousness that the content requires. That being said, it is a little odd how little Marina is actually featured in this issue, since she’s the actual victim here. I think a compelling argument could be made that she should be the central character as opposed to Roman. Not only would we have gotten some needed depth to her character, we would also get an interesting, outsiders look into Roman’s life.

Instead ,the focus of this issue is on Roman. It’s hard to find fault with decision, masterfully fleshing out the complex portraits of one of the primary characters of Zero is sorta Kot’s MO. We get a valuable glimpse Roman’s history, but Kot also gives us a lot of psychological details. When asked by one of his client’s if he believes he controls his own destiny, Roman says that he “prefers not to think about it.”

It could easily be construed as a throw-away answer, a deflection of a subject Roman doesn’t feel like talking about at the moment. However, given his actions in this issue, it’s hard not to view this answer as a sincere response. In his past, Roman is a man with few scruples, living the life of a pseudo James Bond. He deals guns, he drinks and plays poker, and generally is having a good time. He doesn’t care if he’s being controlled by forces larger than himself because he’s living the good life.

This laissez faire attitude of his isn’t exactly the stuff of heroic legend, but as you alluded to Patrick, in some ways, this makes him a more sympathetic character. Unlike the rest of the men he deals with, Roman views women as something more sexual objects (…perhaps sort of a low bar for heroism). There are many instances throughout the issue where his compatriots derogatorily refer to women in some way but Roman abstains from this behavior. This behavior extends to his treatment of Marina, who despite being possibly pregnant with another man’s baby, he still loves. Just as he doesn’t let society dictate how he feels about running guns, he also doesn’t let it stop him from caring for a woman that his friends view as nothing more than object.

This makes it truly difficult to talk about who exactly Roman is. In previous issues, we’ve see that in later years he becomes more reflective, often asking Zero those hard-to-answers questions on the nature of existence. Perhaps he learned something from the events in this issue and perhaps not. As readers, we generally like to be able to pin down who or what our characters are or represent, but with Roman that proves difficult. It’s a murky subject that has no real answer and leaves us a bit uncomfortable.

Perhaps that’s for the best as it parallels the feeling we get regarding the other theme in this issue, sexual abuse. We feel uncomfortable talking about it and maybe that’s because for too long we’ve simple ignored it. We live in a world where women often feel uncomfortable reporting that they’ve been sexually abused at colleges or universities – supposed institutions of higher learning. That society has a way of turning it’s shoulder when such things happens surely is a primary reason why this behavior happens in the first and subsequently why it’s not reported. However, by starting a dialogue about the issue, confronting it head on and dealing with it, hopefully we can prevent it from happening. It’s wonderful to see Kot examining this difficult subject matter in his comic and hopefully it will serve as a gateway to conversations about how we can make the situation better.