Spencer: Comparing any comic on the stands today to a book from the Golden or Silver Age is like comparing night and day. Besides the drastic differences in art, pacing, and dialogue, comics today simply operate with more subtlety, complexity, and shades of grey than the books of the 60’s. That isn’t always a plus — I miss a time where Superman could simply be inspirational — but for the most part, modern comics to a better job of reflecting the complexity of life itself. Kyle Higgins, Alex Siegel, and Elsa Charratier’s C.O.W.L. 6 is a Silver Age throwback, and the simple morality tale it weaves is a far cry from the version of Chicago presented in its first five issues. This contrast is the perfect way to display how far Geoffrey Warner has fallen.

This issue is actually meant to be a comic published in-universe, an origin tale of C.O.W.L. founder Geoffrey Warner — a.k.a. The Grey Raven. The issue presents Warner as impossibly idealistic and moral — he gives up careers as a policeman and a pro-boxer when they entail breaking the law, which eventually leads him to becoming a P.I. and, later, Chicago’s first superhero! The Grey Raven’s very first case finds him taking down his father, the man who had first showed him how corrupt authority could actually be. 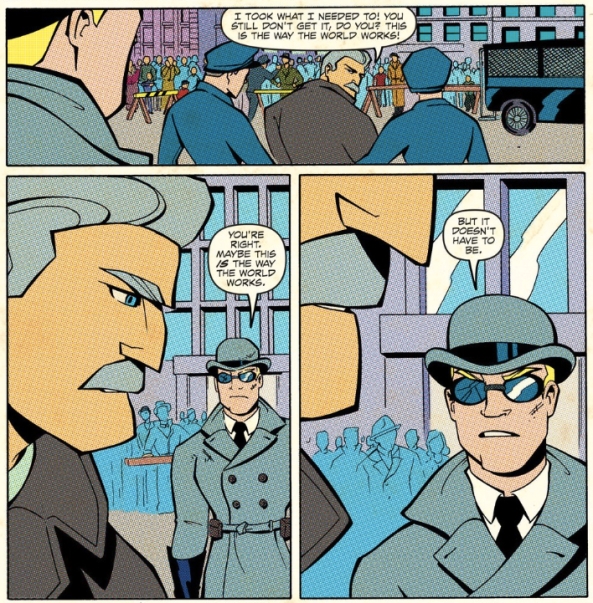 The Grey Raven is about as Silver Age a hero as they come: that inspirational line in the last two panels could come right out of Superman’s mouth, and I certainly don’t disagree with its content in the slightest. What’s interesting about this, though, is how far the sentiment is from the older version of Warner we saw in issue 5, the man who enlisted the help of a criminal in order to keep his organization running.

Warner, as presented in C.O.W.L. 6, would seem incapable of such an act — it’s exactly the kind of deal that turned Warner against his father, the kind of compromise that caused him to abandon his early careers in disgust. What happened? Previous issues can only hint at what may have changed Warner — perhaps after years of running C.O.W.L. he’s simply gotten old and tired, more concerned with keeping his organization running than morality — but no matter what the reasons, taking a look back at the Grey Raven’s origins goes to show just how far he’s fallen from grace.

I’m also interested in Warner’s father, James. At the beginning of the issue he’s seen as a young officer, accepting bribes from a local mobster. 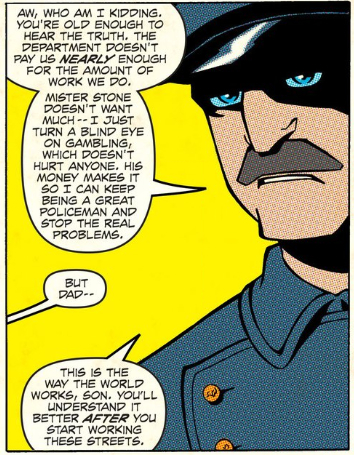 This is certainly immoral, but James can at least attempt to justify his actions; by the time he’s become the henchman to Chicago’s first supervillain and party to the murder of a fellow officer, though, he’s lost every ounce of moral high ground. It’s a slippery slope from minor infractions to major crimes, with James clinging so hard to his justifications that he’s blind to how far he’s truly fallen. It’s easy to see Geoffrey taking the same path as his father; the question is, is his decision to fabricate crimes for C.O.W.L. to fight the first step of this path, or the result of years of increasingly greater transgressions?

Of course, all this theorizing assumes that we can take everything in this comic as gospel. I’ve already mentioned how Silver Age comics aren’t exactly known for their realism, but the events of this issue also have something else working against them:

Yup, in-universe this comic is essentially a propaganda piece, based on information provided by C.O.W.L. themselves, who aren’t going to paint themselves in anything but the most flattering light possible. I think that the origin we’re presented with in this issue is at least close to the truth — Warner’s moral stand against the police would certainly explain why he would eventually go on to form C.O.W.L. and why he’d be so dead-set on keeping it running — but the events have almost definitely been tweaked to make Warner look better than he actually is. I guess one thing’s certain: Warner’s a shrewd businessman. 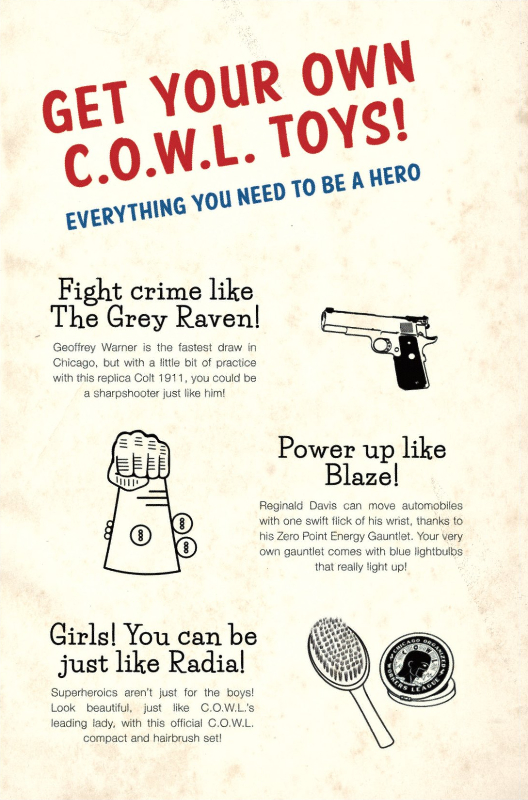 Take, for example, this ad for C.O.W.L.-based toys, profits from which no doubt go right into the organization’s pockets. This ad continues to show how Warner has been presenting the members of C.O.W.L. as larger-than-life heroes; these are the same kind of toys you’d see featuring idealized heroes such as Superman and Batman, but the members of C.O.W.L. are real people with real flaws, here smoothed over to make them more palapable heroes for the public, much like is being done in Geoffrey’s origin comic.

Of course, this is still a story taking place in the 1960’s, which is why this ad is so blatantly sexist. The copy for Radia’s make-up kit implies that her only purpose on the team is to look beautiful; while The Grey Raven and Blaze get toys emphasizing their skills and power, Radia is only valued for her looks. It’s the same problem Radia faces every day — despite being one of the most powerful members of the team, she’s constantly overlooked and condescended to — and while it may be a problem that was rampant in the 60’s, it’s still something women face even today.

Patrick! While there’s certainly much to appreciate by approaching this issue as a stand-alone story — I think I most enjoyed the retro-style Image house-ads — most of what I dug into involved examining this issue within the context of the world Higgins, Siegel, and Reis built over the first five issues. How did you approach reading this issue? What was your favorite “retro” touch? And I may be off, but doesn’t it seem strange that Geoffrey’s mother is a flapper? The date seems too early, and I thought most flappers were young single women, not mothers and wives of highly exalted men.

Patrick: Actually, by 1917, it wouldn’t be impossible for a young lady in Chicago to be affecting the flapper lifestyle. It does strike me as odd that the mother of a ten-year old and a cop’s wife would be so in to jazz and partying, but maybe Mrs. Warner is just trying to be cool, you know? She certainly looks out of place in her day-to-day. 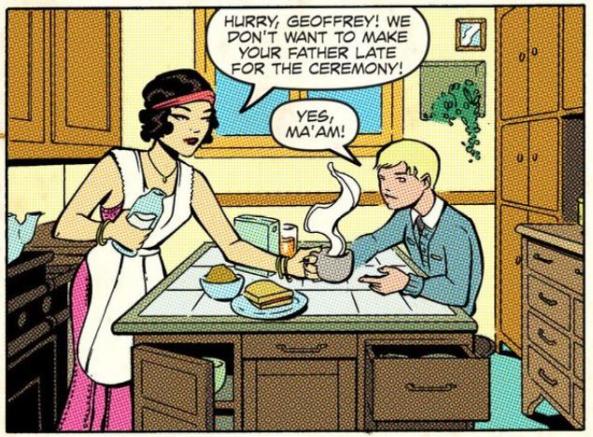 Is she still dressed up from the night before? Maybe she woke up at 3:30 in the morning so she can dress like this for breakfast. This is a silly little detail that almost reads like a mistake. Almost. Check out the rest of what’s going on in this panel — you won’t find a complete breakfast like this outside of a commercial for Kellogg’s products. Playing to the idea that all of this is in-universe propaganda, the characters and events aren’t representative of the truth, but representative of the collective story we all know and all share. Quick – what’s a 1920s woman look like? Good – don’t change that first thought at all: that’s who she is. What’s breakfast look like? Again, don’t you dare alter the first image that pops into your head -it’s coffee, juice, cereal, toast and a big jug of milk.

It’s interesting how little there is to discuss about the actual story of this issue. Spencer, I think we agree that its pat morality is tired, and bordering on preachy. That is, of course, the point. I’ve seen the criticism leveled against Higgins that he’s less interested in writing a comic book and more interested in telling a story — the medium itself not necessarily being integral to the yarn he’s weaving. I understand what that criticism is suggesting, but I always find it a tad short-sighted: Higgins simply isn’t content to let medium dictate what a story can and cannot be. You don’t even really need to look outside of the first five issues of C.O.W.L. to make that point. The pacing is slow, deliberate, patient – a photo shoot mentioned is issue 1 happens in issue 3. That’s not part of some long term master-plan mind-blowerry, but the consequence of deliberate storytelling. Just because we don’t see that sort of patience for more mundane details in other comics doesn’t mean that it can’t happen here.

With issue 6 of C.O.W.L., we can start to apply the inverse of that philosophy to this series. There’s no medium that can’t contribute to this franchise. Consider the following: this whole thing spun out of Higgins and Siegel’s short film, The League. I haven’t gotten an opportunity to check it out yet, but as the sphere of what C.O.W.L. is swells, I’m starting to get excited about every permutation of its world. This issue might have the title “C.O.W.L.” on the front cover, but we’re meant to see it as a diagetic piece from within the universe — even as we know it to be a piece of art within our own universe. Higgins and Siegel highlight this tension by inserting ads for current Image comics series (like Wytches and Velvet), but twisting them to the aesthetic of the time this Gray Raven story was published. While the ads for the C.O.W.L. toys are 100% fake, these ads for comics are sorta real – you can really get some version of all those comics. It’s cute and the audience is immediately in on the joke — especially if they’re regular comics readers.

For me, the most interesting thing about this issue — and the expansion of the C.O.W.L. media experience that it ushers in — is the ad for Joe Clark’s album titled “The C.O.W.L. Sessions.” Unlike the tongue-in-cheek comic series, this record is 100% real (well, the recorded music is real, anyway – no vinyl just yet). You can pick it up on iTunes for like ten bucks, and it’s not a bad listen. Clark’s music channels some more obvious influences; the instrumental version of “Chicago” sounds like Clark had Kind of Blue on the brain when he composed it, and the horns on “Boss” are about as Mingus-y as you can get. Again, though, that’s not a knock against the product. The album plays its roll very well, establishing setting and tone just as well as this comic-within-a-comic.

When we do finally return to the on-going narrative of C.O.W.L., the amount of extra thematic baggage we’ll be carrying with us is going to be amazing. After a stellar first arc, it’s great to see Higgins, Siegel, and whatever artistically minded friends they could rope in to contribute, taking a different approach to world-building.