Greg: I studied a lot of television history in college, and there are many similarities between that medium and comic books. Particularly, there’s a notable trend in both mediums from self-contained, episodic units that could be watched and appreciated with no greater context, to highly serialized, novelistic longform works that have identifiable cause-and-effect and require consumers to know their stuff. TV content creators seem to understand this is a primary method of creating and consuming TV now, with binge-watching services like Netflix and Hulu taking storm, and even half-hour sitcoms serializing like crazy (I would not recommend jumping into New Girl halfway through, for example). Comic book creators, however, still seem to try and cater to both extremes of readership; in the case of Secret Avengers 10, they manage to succeed, but just barely.

Spider Woman and Vladimir watch a feed of Maria Hill interrogating Snapper, an associate of the still-apparently-a-terrorist M.O.D.O.K., while trying to ignore the looming threat of a spectral/supernatural/something-or-other rip in the space-time-continuum, that seems to be singing “The great culling is here”. Not at all cryptic, right? Meanwhile, Hawkeye catches up with Coulson in Venezuela and the two have a stand-off — only to find M.O.D.O.K. colliding with them unexpectedly. Perhaps he’s apparently-not-a-terrorist?

In many ways, this issue feels like the setting of chess pieces before a final onslaught. The reader is constantly reminded of who each character is, what each character wants, and most importantly, how these play into the larger plan at hand. As a newbie to this series, I did appreciate the concise attempts at orientation, and marveled at editor Will Moss’ ability to boil down character dynamics and wants into pithy one-sentence attacks. However, as a guy who knows stories and likes to think he’s good at synthesizing information on his own, I got pretty frustrated at the sheer volume of these reminders. It made me feel as though the issue was padded, like it didn’t have anything to say beyond reminding me what it already said, and what it’s planning on saying in the next issue.

Fortunately, despite these flaws, the issue still crackles with suspense and micro-scenes that erupt into conflict, regardless of what it means to the overall narrative. Let’s look at this brilliant scene between Maria Hill and Snapper. Now, I ain’t gonna lie to y’all, before he appeared in this scene I had no dang idea who Snapper was. And, yes, the provided information of “worked for M.O.D.O.K.” does help me a little bit. But more importantly, the scene works without knowing that. Based on every piece of information derived from their dialogue, I can infer who they are to each other, what they want from each other, how they perceive each other, and most importantly to this scene, their positions on the totem pole of “power”. When Snapper’s goons charge the room and Snapper taunts Maria with her own mistake, I feel like I know exactly what’s going on and why it happened. To oversimplify: good scenic drama is good scenic drama, and this is good scenic drama. 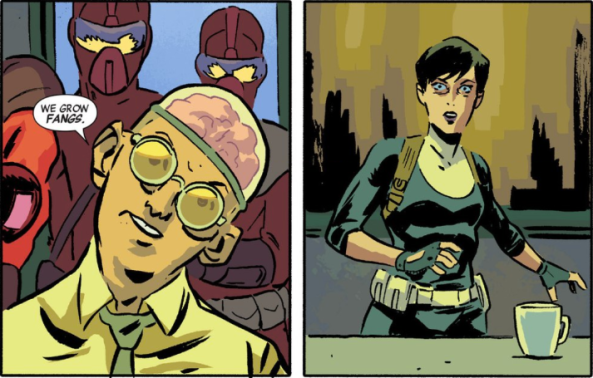 To change gears, I just want to praise the visual work of artist Michael Walsh and colorist Matthew Wilson. I don’t use the word “ballsy” enough in these articles, but their daring use of bizarre color palettes and abstract deletion of information really kicks this issue up a notch. When Maria snaps and smacks Snapper (say that five times fast), Wilson’s colors explode into a complementary yet jarring usage of purples and yellows, a fine visualization of Maria’s controlled yet erupting rage. I also love the subtle desaturation of colors when we finally see Hawkeye and Coulson face off. It’s a bold contrast — from big, hyper-stylized, popping colors to muted, basically grayscale tones. It’s almost like moving from Adam West’s Batman to Christian Bale’s Batman in one page turn. Finally, take a look at this picture: once, where there was a perfectly identifiable and corporeal background, now there is literally nothing. A stark, needling artistic choice for a stark, needling moment. 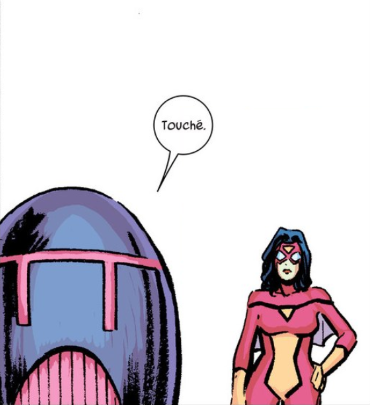 Spencer! Were you annoyed by the constant reminders of how this fit in to the ongoing storyline, or excited? And what do you think of the Talking Heads-referencing title of the issue? What say you?

Spencer: Well, I do know who the Talking Heads are, but I’m a bit embarrassed to say that I didn’t catch the reference. There’s a scene in Scott Pilgrim vs. the World where Knives Chau cries, “I didn’t even know good music existed until, like, two months ago!”, and despite having listened to music independently of my family for over ten years now, that’s how I feel pretty much every day of my life. I absolutely love music, but I’m so far behind I feel like I’ll never catch up, and I have rather narrow, specific, and slightly-offbeat taste to boot, so a lot of the classics I should know fly right over my head.

Actually, I had a similar feeling while reading this issue. I’ve been following this volume of Secret Avengers since issue one, so I know the various events, characters, and motivations that have lead to this point (though I always appreciate Kot’s snarky captions/reminders), but hell if I’ve got any idea what it’s all leading up to. Greg, you’re right that this issue feels like it’s setting up for the final onslaught — Kot specifically teases the “third act” in the cliffhanger — but usually these set-up issues are a bit more obvious about what they’re leading up to. Kot’s still playing his endgame close to the chest, and while I’m sure it will be a sight to behold once revealed, everything’s still frustratingly vague at this point.

That doesn’t mean individual scenes aren’t effective at ramping up the tension. Greg already highlighted how excellently structured Maria Hill’s interrogation of Snapper is, but I also thought the scene at the Kowloon Walled City was just as well done. One minute the city’s there, the next it’s gone — whatever that city was jailing, it’s now free, and Walsh perfectly captures just how terrifying that is. 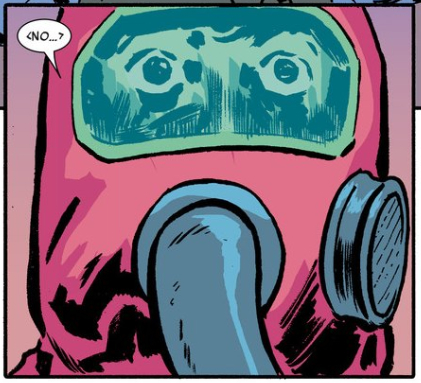 Of course, we still have no idea what this guard is actually seeing that’s so frightening. I suppose that’s the purpose of a cliffhanger, but this issue has four different cliffhangers and, out of them all, the only one with clear stakes is Maria Hill’s. The other three all create a palpable feeling of dread, but with them comes an equally powerful sense of confusion: what was locked up in Kowloon? What’s this Culling the Fury is talking about? What’s Coulson’s problem that M.O.D.O.K. has a solution to? It’s not the lack of answers that frustrates me, it’s the fact that I barely understand the questions being asked.

Still, putting their endings aside, each scene here works quite well as an independent little story. Spider-Woman and Vladimir have an easygoing rapport that’s a joy to read, and Kot and Walsh manage to squeeze every bit of humor out of the Hawkeye/Coulson chase. 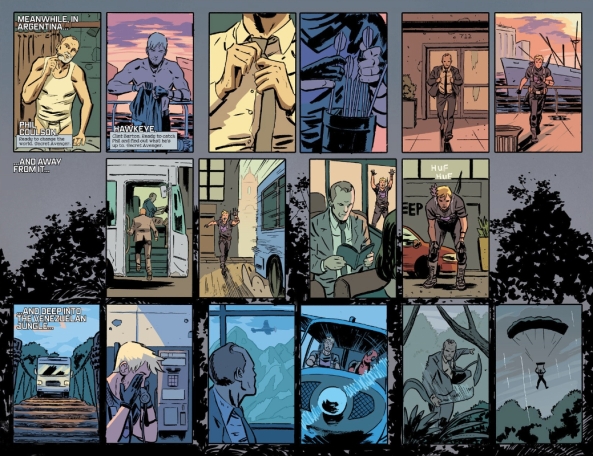 The contrast between the two is perfect — Coulson is supposed to be the unhinged one here, but he’s still far more buttoned-down and composed than Clint, whom Walsh manages to make look frantic and sloppy even as he’s parachuting in tiny-silhouette form (then, of course, even just that one tiny panel of Deadpool establishes that he’s far more deranged than either man). I also found it effective that this is the only story in this issue not told in one chunk — after this spread we cut away from Coulson and Hawkeye, making the eventual page-turn reveal of their stand-off in the rain all the more powerful.

While all these various plots may work well as separate stories, though, I don’t feel like they ever really gel into a cohesive issue. Most of these plots couldn’t be any more different, but the fact that they all end with massive cliffhangers, bringing the second act to a close, practically begs the reader to search for connections between them that just aren’t there. Secret Avengers is usually smarter about its plots, either sticking to one story or focusing on a couple that have similar tones or stakes, but issue 10 feels a lot like Kot just needed to get each of these stories to a certain point, and this was all the space he had to do it.

So, despite all my above rambling, I’m actually at a bit of a loss about how to talk about this issue. Criticizing a book by saying “I don’t understand it” always feels weak, but the honest truth is that, while I like a lot of the individual elements of Secret Avengers 10 — particularly Walsh and Wilson’s art and Tradd Moore’s stellar cover — I really can’t even begin to figure out what this issue is all about. I’m certain it will make a lot more sense in the future, once we’ve seen this story finished and have a better idea what Kot’s trying to say, so for now I guess I’ll just have to wait.