…like Psycho, it will now effectively recommence, shifting focus to characters who had seemed to be playing supporting roles…

Drew: As well-known and well-regarded as Psycho is, its form — where the focus of the movie abruptly shifts upon the death of what appeared to be the film’s protagonist — is as jarring today as it was in 1960. Killing the protagonist violates one of our most basic assumptions about a narrative, leaving us without an anchor as the story continues without its lead. Mike D’Angelo’s thought-provoking “How did one of 2014’s most striking scenes get confused with one of its worst?” (quoted above) details how director Zack Palmer negotiates this transition in Proxy, but I’d argue that the most important part of the transition is simply that the story isn’t complete.

If Psycho was truly about Janet Leigh’s thieving secretary, her death would be a totally satisfactory ending, but rather than resolving anything, her death only creates more tension. Who killed her? Why? Will this villain ever meet justice? That Psycho misleads us about those first two questions is inconsequential — Quentin Tarantino’s Death Proof is unequivocal about those, leaving only the third question to be resolved in its second half. The point is, while the protagonist’s life is over, the story sure as hell isn’t, which is enough to carry us through any number of unexpected deaths. At least, that’s the presumption Warren Ellis and Jason Howard are banking on as they carry us through their own outsized Psycho moment in Trees 8.

(The other important thing about Psycho moments is that they work best as a surprise. As always, our discussion here presumes familiarity with the issue, so consider yourself sufficiently warned of the spoilers that are sure to follow.)

Honestly, it’s not clear who even survives this issue. We see Chenglei and Professor Bongiorno die, and it seems they’re survived by Zhen and Egligia, respectively, but all bets are off with the Svalbard crew, as their helicopter crashes after a burst from the tree/flowers blows up all electronics in the vicinity. Pile that on the shelling of Puntland in issue 7, and this series has become a bit of a bloodbath. Of course, the deaths here hold much more emotional significance, as these are characters with names, and personalities — characters we’ve come to know and love over the previous seven issues.

Ellis and Howard lean into that gut-punch hard, reminding us of just how blissful Chenglei and Zhen are, even going so far as to allow talk of their “future”. 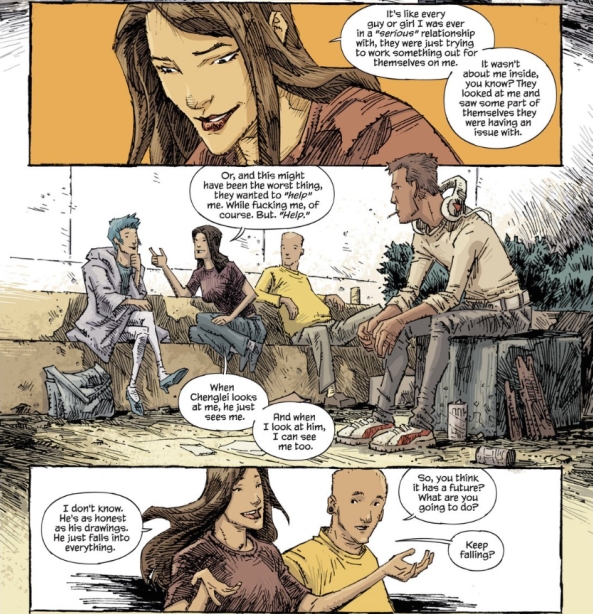 Of course, they’re only warming our hearts to make it easier to rip them out of our chests. That conversation is cut short when Chenglei approaches, running to warn them about the impending “disinfection” of Shu. He never has a chance to warn them though, as he’s blown to bits before ever reaching them (though, heartbreakingly, in full sight of Zhen).

From there, Ellis and Howard never let up, detailing Eligia’s murder of the Professor and the crash of the Norwegian helicopter. What intrigues me about these three deaths is how they’re met by the victims. Every single one of our protagonists sees their deaths coming, but their reactions couldn’t be further from one another. Chenglei, having something to live for (for maybe the first time in his life), wants to escape it, hoping desperately to outrun death. Bongiorno, on the other hand, accepts and welcomes his fate. You know, just so long as he has an opportunity to finish his book first.

More than a fitting symbol, I think the reminder of Bongiorno’s interest in literature is essential to understanding the difference between his and Chenglei’s reactions to death. That is, endings are an accepted and often celebrated fact of literature. In painting — Chenglei’s chosen medium — however, the notion of an end is less well-defined, and perhaps even less welcome. I’m reminded of that Pablo Picasso quote:

To finish a work? To finish a picture? What nonsense! To finish it means to be through with it, to kill it, to rid it of its soul, to give it its final blow the coup de grace for the painter as well as for the picture.

Intriguingly, the parallels between aesthetics and attitudes towards death aren’t limited to the arts here, as Creasy’s anger at her impending doom — throttling Marsh even as their helicopter plummets to the Earth — seems apropos of a scientist, or really anyone who pursues answers. She can’t die now, while there are still questions to be asked. She’s here for the end of Psycho, not just Janet Leigh’s part.

Ryan, I can’t wait to hear your reactions to this issue. I know you’ve been impatient at times with the pace of this series, but I can’t help but wonder if this installment packs in too much event. Even with all of the action, I’m struck by the fact that we’re really not any closer to any answers, which I think was your objection in the first place. Do you still feel frustrated by the slow burn on the questions, or are the events here satisfying even without answers?

Ryan: Drew, I have been called worse things than impatient (as seen on a guy-rating website), and my knee-jerk reaction when reading this issue is that Ellis wrote it explicitly to silence me and other unforbearing critics of issue 6. Other than proffering a mighty metaphorical middle finger to the complainers of slow pacing, your question stands: what have we accomplished with the surplus of action in this issue?

At the very least, Trees 8 subverts expectations with these deaths. Last we saw Chenglei and Zhen, their journeys to self-discovery neared completion after finding each other, as seen in two pages of aurous bliss. Issue 6 foreshadowed the military ramping up its presence in Shu with brief glimpses of the flying strike drones and quadrupedal anti-infantry automatons (which look suspiciously like the Terror Drones from the game Red Alert 3)… 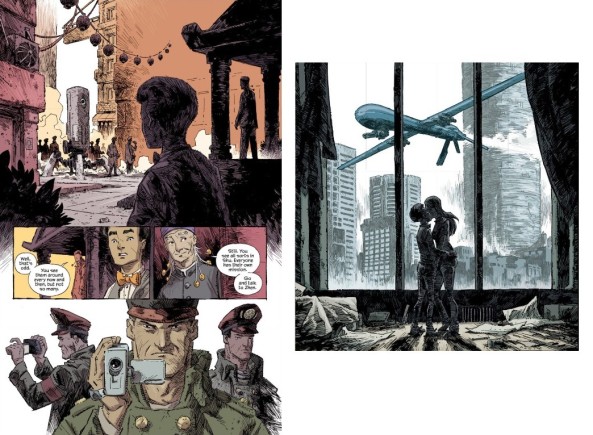 …but this purging follow-through, I could never have guessed. What will Zhen do on her subsequent quest for vengeance? Should we expect a guerilla force of sexually liberated artists? Or will responsibility fall upon the prying eyes of the United States government?

The other notable, most probable death is that of Prof. Bongiorno. We first receive some interesting exposition on the man: a member of the defunct Italian intelligence agency SISMI, the equivalent to an amalgam of our CIA and the NSA, an organization notorious for instances of illegal abduction, forgery of evidence, and other spy-movie stuff. My ongoing suspicions of Bongiorno’s motives, after his purported death, seem like they were misplaced. However, there is a chance — though it be small — that the Professor survived, if only he 1) escaped the fire and 2) Elegia’s knife missed the axillary or brachial artery in his shoulder. Of course, maybe he did teach Elegia too well, and this scene truly represents the passing of the torch from the old guard to the new.

And then there’s Creasy and poor, poor Marsh. To continue Drew’s theme of aphoristic artistic analogies, I believe theirs would be one often attributed to Da Vinci: a work of art is never completed, merely abandoned. The Trees communicating through the poppy flowers is his passion, but Dr. Siva’s prognostication, that the Trees are “going to shout so loud that it’ll make us blind, deaf, and dead just to hear them”, proves correct. Yet Marsh pines (tree pun) to listen, nevertheless. Just look at his face as the cataclysmic amperage, seemingly acting as an EMP, lights up the sky and crashes the helicopter:

As our friends from down South would say, he looks happier than a dead pig in the sunshine.

My gut wants poor, poor Marsh to live. He deliciously fills the role of the “too close to their subject” scientist (see: Dr. Brakish Okum from Independence Day); however, I am inclined to agree with Drew’s assessment of Creasy being a survivor. She was the only character at Blindhail Station to experience hallucinations in the form of a mass of wailing infants due to the exposure to the Trees, which seems to mark her as the only one aside from Marsh to stand a chance communicating with the alien flora.

In response to Drew’s point that, despite plenty of happenings and character deaths, the plot advances very little from this issue. I, however, choose to view this issue as this series’ volta, wherein we see a dramatic or rhetorical shift in though or emotion. The question is: where do we go from here? Readers surely noticed the aberrant lack of pull quote at the end of this issue; instead, we were left with a simple “Next: Two Forests”. The idea of Earth being one “forest”, and perhaps introducing and developing the extraterrestrial aspects of the Trees seems interesting, and plays into the last question posed by the two American big-wigs as they discuss the destruction of Shu and whether or not any of it was captured by satellite: “You can’t see what’s going on under [the Tree] from space, right?” Maybe in this upcoming arc, we will find out just who is looking.