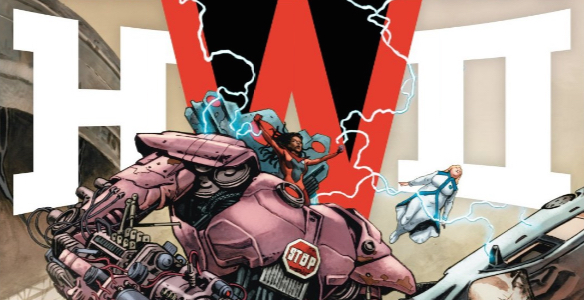 All those innocent contractors hired to do the job were killed! Casualties of a war they had nothing to do with. All right, look, you’re a roofer, and some juicy government contract comes your way; you got the wife and kids and the two-story in suburbia — this is a government contract, which means all sorts of benefits. All of a sudden these left-wing militants blast you with lasers and wipe out everyone within a three-mile radius. You didn’t ask for that. You have no personal politics. You’re just trying to scrape out a living.

Violence is never a good look. Self-defense may justify it in some cases, but any innocents caught in the crossfire tar even the most noble motives. It turns heroes into villains and obscures the line between good and evil. I’ve had the luxury of thinking of this as a hypothetical question for most of my life, the kind of moral quandry characters might be confronted with in comics, but not exactly an active concern in my day to day life. But in a country facing the rise of white-supremacists, I can’t tell you how many think pieces I’ve read in the past two years debating the morality of punching nazis. More broadly, the questions are about when violence is justifiable, and how much collateral damage we’re willing to accept of said violence. These are exactly the questions everyone is weighing in Harbinger Wars 2 4, though they’re far from the only “ripped from the headlines” commentary in the issue, which paints a startlingly nuanced portrait of our times. END_OF_DOCUMENT_TOKEN_TO_BE_REPLACED 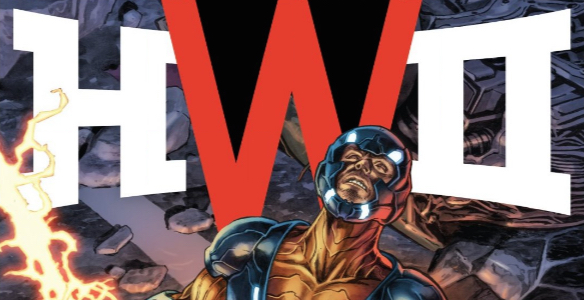 What is the collective noun for superheroes? An immodesty of superheroes, perhaps? A bluster, a cluster bomb, a swank? Somebody ought to settle the issue soon, if we’re going to be showered with films like “Avengers: Infinity War.”

Anthony Lane in The New Yorker

That quote comes from my least favorite culture review in recent memory. I’ve heard enough variations of “superheroes are dumb” over the years to keep my eyes rolling all the way to Anthony Lane’s door, but what’s particularly frustrating about his review is that it never bothers to support his dismissive attitude. It’s not a critique so much as a list of characters and events in the movie and the smug assumption that we all agree that that list is too long. To be clear, I think there is plenty to critique about that movie, not the least of which that it almost certainly would ring as paradoxically overstuffed and hollow without at least some familiarity with these characters — if we’re not already invested in Tony Stark’s worst fears or Thor’s grief or Doctor Strange’s sense of duty, they’ll read as pretty thin in the movie. Like most summer crossover events, Infinity War is mostly plot machinations, cashing in on the character work developed in its respective solo series. Such is definitely the case with Harbinger Wars II 2, which heightens the drama of the impending battle, but does relatively little to draw me into that drama. END_OF_DOCUMENT_TOKEN_TO_BE_REPLACED 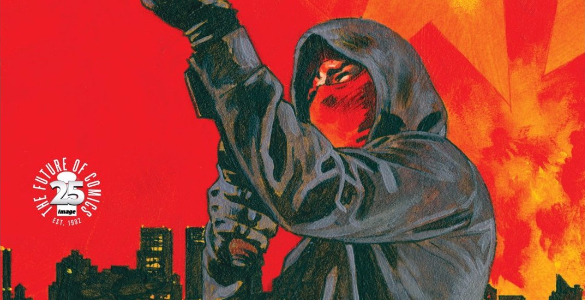 It was clear enough that Dylan’s method for first round of killings wasn’t sustainable. We understand that in a practical sense — his sloppiness had landed him in brushes with both the Russian Mob and the NYPD, both of which seemed to be edging ever closer to figuring out who was behind these attacks — but I also mean it terms of Dylan’s psyche: the more his life was mired in guilt and paranoia, the less it seemed like he would risk so much to protect it. Or, perhaps more importantly, the less we could relate to his desire to protect it. This series regularly places Dyaln at the edge of relatability, but creators Ed Brubaker and Sean Phillips are smart to pull Dylan back a bit in this issue, renewing his lease on life before plunging him headlong into a one-man war against the Russian Mob. END_OF_DOCUMENT_TOKEN_TO_BE_REPLACED

…like Psycho, it will now effectively recommence, shifting focus to characters who had seemed to be playing supporting roles…

Drew: As well-known and well-regarded as Psycho is, its form — where the focus of the movie abruptly shifts upon the death of what appeared to be the film’s protagonist — is as jarring today as it was in 1960. Killing the protagonist violates one of our most basic assumptions about a narrative, leaving us without an anchor as the story continues without its lead. Mike D’Angelo’s thought-provoking “How did one of 2014’s most striking scenes get confused with one of its worst?” (quoted above) details how director Zack Palmer negotiates this transition in Proxy, but I’d argue that the most important part of the transition is simply that the story isn’t complete.

If Psycho was truly about Janet Leigh’s thieving secretary, her death would be a totally satisfactory ending, but rather than resolving anything, her death only creates more tension. Who killed her? Why? Will this villain ever meet justice? That Psycho misleads us about those first two questions is inconsequential — Quentin Tarantino’s Death Proof is unequivocal about those, leaving only the third question to be resolved in its second half. The point is, while the protagonist’s life is over, the story sure as hell isn’t, which is enough to carry us through any number of unexpected deaths. At least, that’s the presumption Warren Ellis and Jason Howard are banking on as they carry us through their own outsized Psycho moment in Trees 8. END_OF_DOCUMENT_TOKEN_TO_BE_REPLACED

Ryan: In Trees 7, we hear rumblings in the distance, like heat-lightning on a quiet summer night. We also see the rumblings present, like the book shelf in Jumanji which gets obliterated by the stampede. After a somewhat polarizing issue 6, Ellis and Howard return to us with some big happenings and continue to set the stage for what promises to be a hellacious climax. END_OF_DOCUMENT_TOKEN_TO_BE_REPLACED

Ryan: Remember watching Dragon Ball Z when you were younger? Remember how you would be so excited for the final confrontations, but shake your fist of the television screen when an entire episode stretched by and nary a punch was thrown? Well, anime, like manga, like comics, like Dickensian 19th century literature, is serialized. The objective of serialization is to keep readers or viewers invested enough to buy the next installment. Sometimes this can lead to frustrating lulls in action which hide under the guise of building exposition. In many ways, I felt this way about Trees 6. While we receive some rumblings of future events and some fall-out from past occurrences, this issue moves the plot forward the smallest amount possible. END_OF_DOCUMENT_TOKEN_TO_BE_REPLACED