Patrick: I’ve always been a path-of-least-resistance kind of guy – I’m a people-pleaser, a conflict resolver, a middle child, a Midwestern gentleman. That’s a great personality-type to have with you on a road trip or helping you move or whatever, but I’ve run into some roadblocks as an artist with this sort of vanilla disposition. As a songwriter or an improviser or a writer, I have to let down a lot gates before I can come anywhere near expressing something other than “I don’t want to be no trouble.” Allowing ourselves to feel, and then expressing those feelings publicly, is ugly, self-indulgent, messy, and embarrassing…or at least, that’s the fear that so frequently stands in my way. If only I had an easier time expressing what I really am — whatever that means — I could be a better artist. Kelly Thompson and Sophie Campbell’s relaunched Jem and the Holograms explores how baggage, both visible and invisible, can be a hindrance to artistic expression.

Hey everyone: meet The Holograms! 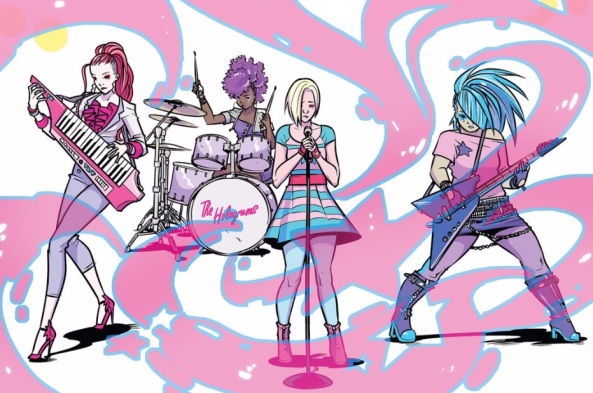 Never mind that the band’s name will end up being hilariously coincidental by the final page of this origin-story issue, this is actually one of the smartest panels in the whole book. This is the first panel of the story, and already Campbell is playing against the expectations set up on the cover. You can see some of this cover in the header of this article, but it’s basically the same scene: same perspective on the characters, they’re all standing in essentially the same place, and they’re enveloped by the same whirling pink lights and stars. The big difference, of course, is that the cover shows Jem in all her hyper-confident, bad-ass, sexy glory. On the cover, she’s even reaching her hand out to the reader. Compare that to Jerrica standing front-and-center. She’s looking down, knees together, hands clasped around the microphone and guarding her chest. From panel one, and without a single word of copy, we understand the disparity between what Jerrica is and who she would like to be.

The issue also moves swiftly to ground this abstract image, giving immediate context to Jerrica’s awkwardness. The band is filming an audition tape. Or trying to, anyway. Turns out this is the third (or fourth…the language is perhaps appropriately murky here) time that they’ve scheduled the shoot only to have Jerrica freeze up once the cameras are rolling. The reason Jerrica can’t get out of her own head is never clearly articulated, partially because Jerrica seems totally incapable of discussing it. When she tries to bail on the filming, her sister (and Holograms’) keytarist, Kimber, chases after her for a pep talk. But that pep talk is decidedly one-sided, with Kimber doing most of the talking. All Jerrica can eek out is the occasional admission of fault. It’s not just on-stage that she can’t express herself, it’s in casual conversation with her sister too.

Remarkably, Thompson and Campbell are able to show us a conversation about the exact same subject on the following pages, only this time the participants — Kimber, Shana and Aja — are able to express themselves freely. At this point in the issue, it’s damn refreshing to see personalities, even if they’re clashing with each other for the moment. This sequence is more alive, more active, and immediately easier to understand, as though to highlight just how frustrating it must be to be Jerrica. That scene between Jerrica and Kimber is colored coolly, with lots of grays, blues and light pinks in the background. Colorist M. Victoria Robado signals the change in energy by reversing this color trend — look how quickly it ramps up to this passionate red:

This is actually split up across two pages, but putting them together like this illustrates just how in sync the whole creative team is. Everything — from the dialogue to the acting to the coloring tells the same story neatly and effectively. I mean, check it out: even letterer Robbie Robbins gets in on the action by making those speech balloons intrude on each other. It’s amazing — the balloons start out so respectful of each other’s space, but get so much more crowded as the argument heats up.

All of this is just set up for the actual meat of the story, but it’s also the most grounded, real portion of the issue. There’s still a lot of material in the back-half of the issue and it’s the stuff of real intrigue: a dead father’s last wish, science fiction mumbo-jumbo, and even a super-secret lab. I’ll admit that my mind started to wander at the introduction of Synergy and various demonstrations of earrings’ holographic powers. I recognize that that too is foundation work that we’ll have to wait until next month to see the rewards from, but y’know, there’s nothing inherently exciting about seeing three versions of Kimber in one panel — especially when comics train you to see the same character several times on one page. 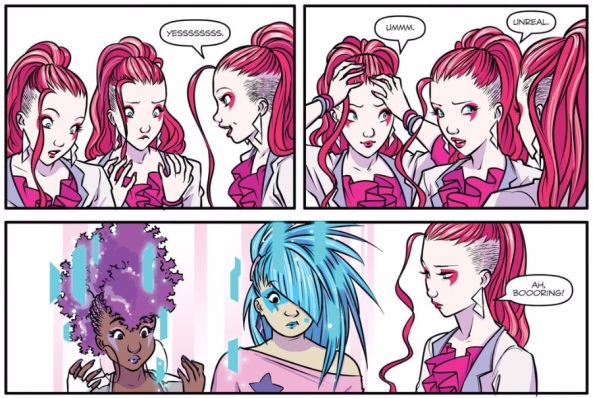 Still, that final page reveal of Jerrica-as-Jem was pretty damn exciting, and I look forward to exploring how this outward change in appearance effects Jerrica’s ability to express herself. Ryan, you’re an OG fan of Jem and the Holograms, right? Did this light up any of those old pleasure centers for you? Are you intrigued by the themes of identity and courage? And who the hell plays bass in this band? Both Aja and and Shana’s bios indicate that they “also play bass” but like, that can be be said of most musicians. Unless you have a dedicated bassist, that bottom end is going to feel thin. I guess that’s what happens when you have a four-piece and prioritize keytar.

Ryan: Patrick, thank you for giving me an excuse to revisit my girl Jem and her Holograms. The cartoon was probably my first favorite TV show. Not hand-picked or even enjoyed by my parents — Jem was just for me. At least, that’s how I felt in my pre-school years. I didn’t have any friends who watched the show or who would sing along with me and perform in my impromptu concerts. I did once force my cousin Timmy to join me, but about halfway through the first song, I pushed him out of the way for my solo. I was all about Jem and thought Jerrica was kind of a drag. In the years before I understood what cool was or even why anyone would do anything other than what their id wanted, Jem was everything. Glamour, glitter, fashion AND fame? Come on!

It’s been nearly three decades since then, and, the themes you outlined about identity and Jerrica’s immobilizing fear resonate. The way Jerrica is framed in the first two panels of page four illustrate her isolation.

She takes herself out back, among bags of garbage and squats above the ground. She can’t pull herself out of it to really respond to Kimber’s threat to leave the band. I don’t know if Kimber is bluffing, but I believe her when she says that she has to take care of herself. That’s really what becoming an adult is: realizing that you make your life with your choices, including whether to stick with a band that will never play in front of other people. While I appreciate Kimber’s boldness, I also understand that this is not so easy for Jerrica. She needs more than her sister’s encouragement and some pink eyeshadow. She needs cover.

And, like divine (or textual) deliverance, Synergy is on the scene. Patrick, you’re right that the narrative nearly stalls after Synergy is discovered. My declared fandom aside, Synergy is the most boring eight foot tall purple fairy godmother in the history of fiction. The mythology pulls us away from what was really working for me: the interplay among the sisters. The history is clear on the page. They fight like real-life sisters, quick to go for the jugular and equally fast to forgive. The pictured argument illustrates so much about all three girls and how much they care about the missing Jerrica.

In fact, the most affecting beat of the Synergy sequence is between Jerrica and Aja on page 19. Jerrica’s eyes have a manic quality. Her desperation to be someone else and her joy at having a way to conceal her identity were concerning. My brow was as furrowed as Aja’s as Jerrica prepared herself to become Jem. Again, my age disconnects me from Jerrica. Now, it’s not that she is lame, it’s that I know concealing her identity may not be the solution that Jerrica hopes for. The most powerful art is created by stripping away artifice and that is all Jem is. At the same time, identity is a process, and I’m confident that she’ll figure it out. As for the rest of the action in the hologram chamber, I do wish Synergy’s demonstration carried more weight than a couple extra Kimbers, but I’m glad that the basic origin story is done with. I mean, until we meet the Misfits.

6 comments on “Jem and the Holograms 1”