Spencer: One advantage visual mediums such as comics, movies and television have over other mediums is the ability to tell two stories at the exact same time. One of my favorite examples comes from Season Four of Mad Men, where Don’s secretary, Miss Blankenship, dies in the office as the partners are having a meeting with a very important client. As the camera focuses on the clients and we hear only their dialogue, in the background the rest of the staff tries to remove Blankenship’s corpse from the office without the clients noticing. It’s a brilliant bit of dark humor, but I’m always impressed by how well the show tells that second story in the background without a single line of dialogue, even as the audience’s attention is divided. Mark Waid, Chris Samnee, and Matthew Wilson manage to pull off similar feats multiple times in a single issue with Daredevil 14 — it’s absolutely dazzling — but also get a lot of mileage out of the stories playing out behind the scenes that nobody notices.

Much of this issue revolves around Daredevil’s new costume and the more public way of life it brings. Matt gets the idea from a discussion with his publisher, Wendell McDuffie, who asks why Daredevil wears a mask when his identity is public. Wendell, of course, is angling for a better “face” for Matt’s upcoming autobiography, but Matt is quite taken by the idea and the freedom it represents. The conversation plays out in the Giants Stadium, which Wendell has rented out for batting practice, and as they chat, Matt casually — and brilliantly — bats a few balls.

I’d love to post this entire four page sequence, but I’ll just stick to these two. As we’ve come to expect from Samnee, there’s some excellent visual storytelling on here — I’m especially fond of how he depicts Matt’s first hit. We never see Matt hit the ball or even swing — just the “krak,” with the baseball cleverly acting as the hole in the letter “R,” followed by the ball sailing out of the stadium, shows us all we need to know.

But as I’ve mentioned, I’m most impressed by the dual narratives going on here. Besides one line of dialogue from the pitcher in the 12th panel, the entire batting story plays out silently and in the background, yet thanks largely to the action and body language (Matt’s confident, perhaps even arrogant, the pitcher’s increasingly frustrated) the story is crystal clear. It’s a technique Samnee and Waid return to later in the issue as well. 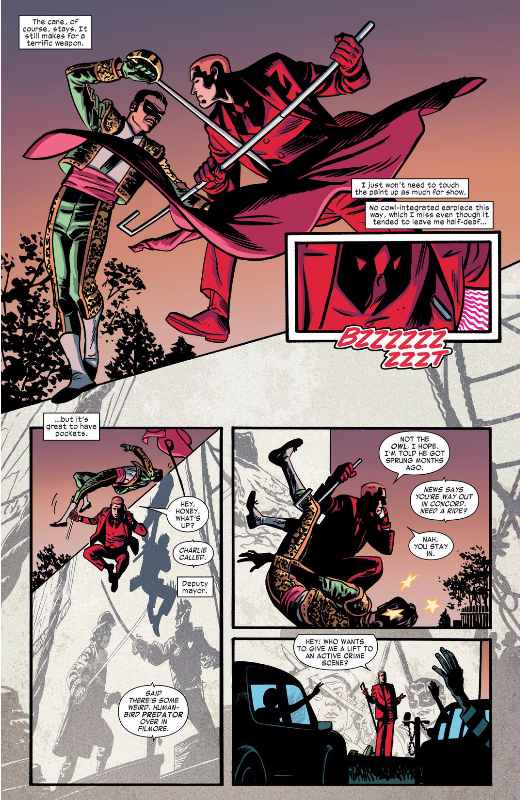 We never see this villain’s plan or even learn his name, but his confrontation with Daredevil plays out clearly in the background as Matt fields a call from Kirsten. In both cases, demonstrating the ease with which Matt can multitask is a major goal of the sequence, but both scenes also show Matt integrating his two identities more than he ever has before. The latter finds Matt using his celebrity to score a ride, while the former has Matt using the full extent of his Daredevil skills in public, as Matt Murdock, for no reason other than to have a little fun. They’re clear visual cues of how Matt’s identity has evolved.

Of course, I’m still not 100% sure how I feel about Matt’s new costume and attitude. In many ways, precedence seems to suggest that they’re a bad idea. The way Matt’s using his celebrity reminds me a lot of recent issues of Batgirl, which eventually condemned Barbara’s more interactive methods, and last month’s Daredevil 13 got a lot of mileage out of the kind of danger Matt’s public identity could bring to his friends and family. Waid even drops the most ominous line of dialogue in all of fiction as if to purposely damn Matt’s efforts.

Yet, Matt’s fans have been nothing but helpful, and Daredevil 13 resolved by revealing that Kirsten’s attacker was her own villain, not Matt’s. Is Waid saying that Matt’s public identity — and perhaps the arrogance behind it — will be his downfall, or his salvation? I’m starting to think that this might be the key conflict behind this entire volume of Daredevil. Can Matt be happy? Can Daredevil have a happy ending? I guess we’ll see.

The rest of the issue finds Daredevil running across the Owl’s daughter, Jubula Pride, searching the city for her father, who she claims has been kidnapped. They eventually discover him hooked up to wires, surveilling the whole city — again, as seen in Daredevil 13 — and though the Shroud again positions himself as Matt’s ally, thanks to a strange spider totem Jubula realizes that he’s the man who captured the Owl!

Unlike the rest of the issue, where we can see multiple Daredevil stories taking place at the same time, here we’re walking in on two stories that have already begun, only catching bits and pieces of them. Matt had no idea Jubula existed prior to running into her, nor did he know the Owl had been kidnapped, and whatever the Shroud’s plan is, Matt’s clearly coming in during the tail end of the operation.

The Shroud has always been an inspired foil to Daredevil, but the way he can conceal both his presence and his plans and motivations make him a particularly compelling contrast to this new open book, public persona Matt Murdock, and I can’t wait to see what Waid does with their opposing worldviews and personas in the issues to come.

Ryan, there’s a ton of rich stuff to talk about in this issue, be it Matt and the Shroud, or the hidden plans, or simply Waid, Samnee and Wilson’s excellent technique, but before you get to it, I have one question I want to ask you:

What do you make of this moment? Matt looks like he’s just come a horrific realization, but I’ve got no clue what it could be.

Ryan: While I can’t personally speak for Matt Murdock, I think he is earnestly impressed, maybe even taken aback- which says a lot. This is a man who has been carried from crisis to crisis by practically all of the flying Avengers, but it is young Ms. Pride here who garners the telling honor of his comment: “If I could fly, that’s how I’d want to fight.” This comes as high praise from someone with the agility beyond that of an Olympic-level gymnast.

I am impressed with Jubula Pride, as well. As you may have guessed, her first name is owl-related: Jubula is the genus name for the African horned owl; however, it may surprise you to find out that this particular species of owl preys mostly upon beetles and crickets, as its small, weak feet and bill betray its inability to catch larger, vertebrate prey. Be that as it may, it’s a cool sounding name, and her aesthetics look just as sharp as her fighting style, which I liken to The Shrike from Dan Simmons’ Hyperion Cantos. Plus, between her and Grizzly in Ant-Man, we may have a shot at getting animal-themed characters back in the mix! Lastly, her initial appearance is also the catalyst for my favorite line from this comic: 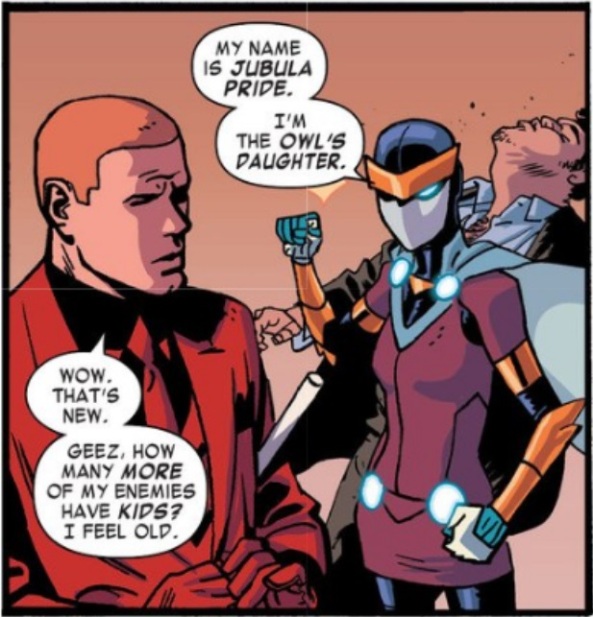 Unlike some of his perpetually youthful compatriots (Peter Parker seems like he was in high school/college for about twenty years), the character of Daredevil rightly own the mileage which it has put on. That being said, he kept up well with and even led his younger and less experienced ally: 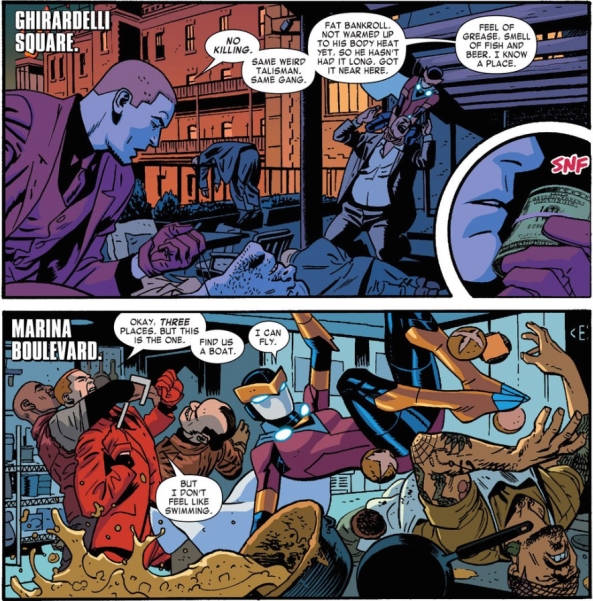 That’s some decent chemistry, there. Wouldn’t it be kind of kooky if Pride turns out to be yet another wonderfully empowered woman lusting after Matt Murdock, especially now that Matt and Kirsten have officially dropped the L-bomb on each other?

Spencer, I loved how you use the word “evolved” in regards to Matt’s change in style. This evolution struck me most out of all the wonderful components in this issue. This world of comic books constantly buffets readers with Brand New Days, retcon punches (ahem), Convergences, Battleworlds, and general series re-boots. In these, we often see dramatic re-imaginings of beloved characters; however, the transformations in the character often occur off-panel or are explained in a few expository captions. The transition from the noir and disturbed Daredevil of his 1998-2011 run finishing with Andy Diggle to the return of the swaggering Murdock of the Silver Age in the hands of Mark Waid serves as an example of this. We see something beautiful in #14: the character undertakes the change himself, right in front of our eyes. Does this mean I like his new look? No, it’s hideous and ostentatious (dat belt buckle, tho), but I totally support Matt Murdock’s rationale behind trying a new look. I have also been guiltily enjoying Samnee’s wonderful ability to capture Matt’s face during conflicts, a time when Daredevil normally dons his mantle.

Waid and Samnee continue to lay an intriguing path of bread crumbs for readers to follow. From the unbalanced hero turned villain in The Shroud, Matt’s escalating love life, his biography and cantankerous relationship with Foggy, his love/hate of San Franciso, all the way to somehow finding a bit of time to practice law, these are fast times for Matt Murdock and Daredevil, both. Now that those two are officially one in the same, I advise you to keep up with this title, and help me and Matt Murdock develop this into his official catchphrase or hashtag: