Today, Spencer and Michael are discussing Convergence: Speed Force 1, originally released April 8th, 2015. This issue is part of Convergence. For our conversations about the rest of Convergence this week, click here.

Spencer: How do you decide what comics you buy? When I first started reading monthly comics (gasp, almost ten years ago!), I chose my books based almost solely on what characters appeared in them — which, at the time, meant I bought a lot of books starring the Teen Titans and the Flash. It took a year or two before I really started recognizing the names and talents of the creative teams, and a few more before word of mouth started turning me onto new series and new horizons. While today I’m more likely to follow creators I know will deliver strong stories, there’s still a part of me willing to take a chance and pick up a comic solely because a favorite character makes an appearance, and that’s precisely what led me to check out Convergence: Speed Force 1, which stars my favorite character in all of comics, Wally West. It turns out that my reasons for liking the issue are just as personal as my reasons for buying it in the first place — it’s not a perfect issue by any means, but man is it good to see Wally again.

Much like pretty much every other comic DC published this week, the issue opens with The Flash, Wally West, and his superpowered twins getting trapped in Gotham City as it’s sealed in a dome and teleported to an alien planet. Stuck beneath that dome for a year, without his powers and separated from his beloved wife, Linda, Wally begins to go a bit stir-crazy, spending each day trying to break through the dome despite the futility of his attempts.

Even from this early point I knew that writer Tony Bedard understood Wally West. Unlike some of the other heroes trapped beneath the dome, there’s no way Wally could try to lead a normal life or continue fighting crime like nothing had happened. Linda is Wally’s lightning rod, and without her he’s aimless and lost — we’ve seen on multiple occasions how unmoored Wally can become without her, and Convergence is no different.

When the dome falls and Telos the living planet announces his tournament, Wally chafes against the idea of playing along and instead takes off to explore the other cities, rescue anybody in danger, and hopefully arrange a rebellion against Telos. I found this to be another smart decision on Bedard’s part — while Wally was a more cynical Flash than his predecessor, he’s still one of DC’s more optimistic heroes. In fact, speedsters as a whole tend to be more lighthearted and moral than the average superhero, a fact echoed by the appearance of the Zoo Crew’s Fastback.

Wally’s tour of the other cities also allows Bedard and penciller Tom Grummett to throw a little levity into this grim issue.

While there’s nothing fun about the warfare Wally witnesses, Bedard and Grummett at least seem to understand the inherent appeal of exploring all these various universes interacting, and realize that, with his super speed, the Flash one of the few characters who can realistically visit them all. I’m also fond of the way Grummett draws the twins here — while many other artists would have the twins triumphantly trailing their father, draped in lightning, Grummett portrays them in a bit of a freefall, spiraling around helplessly, and I can’t help but get a chuckle out of it. It’s funny without being too silly or distracting from the direness of Wally’s emotions, which is exactly the kind of comic relief this issue requires.

Actually, Grummett’s pencils are strong throughout the entire issue. I shouldn’t be surprised — I’ve been a fan of his work on Robin and Superboy back in the 90s for just about the entire time I’ve been reading comics — but it really is a pleasure to see that he’s still just as good as he ever was. I love how clean Grummett’s pencils are and how clear the storytelling is, and I love that he and colorist Rain Beredo remember that Jai and Iris are half-Korean (even if, as usual, it only shows in Jai), but most of all I love his expressions. It’s easy to tell what each character is feeling and thinking from just a glance, and there’s something very powerful about his close-up shots. 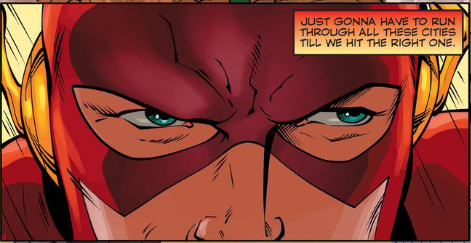 If there’s one aspect of Wally West this issue doesn’t quite nail, though, I’d say it has to be the twins. Admittedly, nobody ever quite got a handle on how to characterize Iris and Jai West (Waid’s bombastic troublemakers are a far cry from Johns’ sulky, moody interpretation), but I still can’t imagine any situation where these two would be unwilling to follow their father on an adventure the way they are in the opening pages of this issue. Iris and Jai seem to exist within this story more as living reminders of Wally’s guilt than actual characters — perhaps that’s simply an aftereffect of the limited space Bedard has to work with, but it’s a bit disappointing nonetheless.

Actually, tying into Convergence restricts this issue in a lot of ways. So much of Wally’s character relies on his relationships and legacy that a Wally story without Linda Park or Jay Garrick, without the Rogues or Keystone City or even the Titans can feel a bit incomplete. Still, this book was more than enough to satisfy my craving for more Wally West, at least for the moment. I can’t help it — as soon as I read “My name is Wally West. I’m the fastest man alive. I’m the Flash,” my heart was doing loop-de-loops.

I could just be blinded by my own emotions, but I’d like to say that even if I ignored my affinity for Wally West, this would still be one of the stronger of this week’s Convergence tie-ins. Michael, I’m not sure what your relationship with Wally West is — do you have a bit more clarity, or are you just as caught up in nostalgia as I am? Is that even an issue in an event as clearly fueled by nostalgia as Convergence is? Also: do you think there’s any significance to Wonder Woman being selected as Wally’s opponent?

Michael: As far as I’m concerned EVERYONE loves Wally West; and if you don’t love Wally West, then you can go straight to hell. Since I love Wally West, I picked up Convergence: Speed Force 1 for the same reasons that Spencer did. Wally is a character who symbolizes what has been missing from The New 52 and something that Spencer mentioned earlier: legacy. Wally grew up and became his own man and to many readers (myself included), surpassed his mentor Barry as The Flash. Many superheroes have their soulmates that they’d move heaven and earth for, but not everyone has a family like Wally West does.

Reading through Spencer’s lead made me re-examine Wally West, the father. More specifically (and oddly) it made me think of something Carmine Falcone said in Frank Miller’s classic Batman: Year One: “Once a man becomes a father he is never truly free.” The quote is in reference to Falcone’s orders for his nephew to kill Jim Gordon’s infant son. A general truth for most superheroes is that their loved ones run the risk of ending up as targets for their enemies; something that Bedard illustrates Wally being keenly aware of. Beyond a Crisis cameo I never really spent much time with the West twins, so I can’t speak to character inconsistencies that Spencer brought up. That being said, I did appreciate the brief refresher on how deeply tied Jai and Iris are to Wally through the Speed Force.

Wally’s family is an essential piece of his identity, so much so that he literally carries them with him wherever he goes. There’s such a wealth of potential stories from that little “Flash Fact” alone and it’s a shame we might never get to read them. Can you imagine the trials and tribulations of teenage Jai and Iris suddenly being whisked away from their angst-filled lives because Wally is worried about them? (Okay, now that I write it out it reads more like a wacky super-sitcom, but I’d still read it.) Though he’s deeply committed, Wally West the father suffers from the same sin that many often do: blind pride. Wally is the father that cares so much about his family that he will stop at nothing to escape this godforsaken dome and reunite his children with their mother. But like the father who’s so focused on the big picture of providing a good life for his children, he’s missing the small stuff; ya know, like getting them to school and stuff.

I’d also like to echo what Spencer said about this particular Wally West tale missing the essential ingredient of a supporting cast. Wally West as The Flash really could’ve taken the name “Speed Force” instead, with its reliance on Jay Garrick, Jesse Quick and Bart Allen. Even without his wife and kids, Wally has always been a family man; take that away from him and he becomes a lesser hero. I think Bedard realized this when he scripted Convergence: Speed Force 1, and if he couldn’t have the large supporting cast that Wally typically had, he could throw in the West twins as a consolation prize. From a story perspective, Bedard had to separate Wally from either Linda or the twins. Taking away the one thing (person/people) that he loves will show us how hard he is willing to fight to get it back. I liked the little quips that Bedard put in there for Wally, like “that hateful honeycomb in the sky;” it’s one of those things that is uncharacteristically Barry Allen and 100% Wally West. To be honest, I don’t think that most New 52 writers remember how to write Barry Allen (because, he’s kinda boring) so they write him with Wally West features.

Some of the “hows” and “whys” of Convergence still completely elude me. How does Wally know that he is the chosen champion? How does he know that Flashpoint Wonder Woman will be the one he fights? Maybe Bedard sees it as unnecessary exposition and he lets Grummett’s artwork do the talking, but I dunno, sometimes I want some exposition! As to the “why” – I have no idea why Flashpoint Wonder Woman is the chosen opponent; it seems completely random to me unfortunately. I would have preferred to see someone more emotionally tied to Wally; even someone from The New 52 Multiverse. How strange would it be for Wally to see the young (also Wally-like) Jay Garrick of Earth 2? How horrified would he be to meet the pervy homicidal Johnny Quick from Forever Evil Earth 3? Here’s hoping that Bedard and Grummett give this Wonder Woman some significant emotional resonance for our favorite Flash.