Ryan M.: A first issue in a series is sort of like a first date. You don’t need the full origin treatment. It’s really a matter of figuring out if you enjoy each other’s company. It provides a sample that hopefully indicates what’s to come, but cannot necessarily lay all of that out. After Patsy Walker, A.K.A. Hellcat! 1, I am ready to invite this series to my place for a home-cooked meal.

The issue opens with Patsy’s presentation for a new business venture that doubles a sales pitch for the series as a whole. The rest of the issue is a flashback showing how Patsy came up with the idea for a temp agency for powered people. Immediately, writer Kate Leth establishes an upbeat and playful tone. Patsy narrates her own story in third person, explaining Hellcat’s backstory over several eras with moments of commentary.

Artist Brittney Williams also contributes a few cutesy flourishes, including the shape of each panel resembling the Hellcat symbol and Patsy posing for a selfie in her cat print sweater. At only two pages in, the tone of the issue has been made clear. The central image is of a smiling Hellcat, her hair flowing behind her. There is also a varied color palette in the page above. Every color in the rainbow is represented in Patsy’s pithy description of her past and present.

Patsy’s present is not so great. She loses her job, her childhood trauma is back in print, she gets kicked out of the building where she has been squatting, and she is about to start a job in retail. She faces each of these challenges brightly. There is nothing that some quality time with her bestie and a beer can’t solve. By showing us Patsy’s reaction to conflicts that range from personal to professional to familial, Leth reinforces Patsy’s resistance to bitterness and cynicism.

Patsy’s energy and verve exude from the page, but it’s her new roommate that solidifies the staunchly optimistic perspective of the issue. When we meet Ian, he has just robbed a bank. Not for nefarious reasons, simply because he needed to pay his bills. The minute someone is ready to discuss musicals or give him a chance to do a kind thing, he has a change of heart and reveals his inner good guy. Even the “villains” of the issue are treated with kindness. Aside from Ian, who is pretty much a full-on good guy by issue’s end, the treatment of Hedy is quite kind. After revealing that Hedy has essentially stolen Patsy’s image and reopened adolescent wounds, Tom notes that Hedy has been going through a some stuff. We are already set up for Patsy’s nemesis to be worthy of empathy. There is no yin to Patsy’s positive yang, except for maybe “r u old” Joe from Patsy’s dating app. That guy is offered no redemption.

The panel above is an indicator that, while the issue concerns the life of a decidedly adult woman, the humor is all-ages and clean. The messages read like a series of Instagram comments and the profile pics all imply that the world is a safe yet goofy place. I especially like Cherp, the guy whose pic highlights his pecs and who uses the ever-creepy endearment of “mommy.”

There is nothing prurient about the book, but there are still bits of silly adolescent humor. The primary location for these kinds of jokes is “Burly’s Books.”

The look on Patsy’s face when she gets recognized while reading Butts Vol IX is so vulnerable and also immediately relatable. I mean, that’s definitely the look on my face when someone calls my name while I am reading the ninth installment in a butt-themed series. The books in the second panel above  (“Let’s Be Brief” and “So You Cut Your Hair”) are both inane and funny without creating a distraction from the story happening in the foreground.

Spencer, what do you think of this debut? Obviously, I found Patsy’s personality charming, but I’d love to know what you think of her in this issue. Is a temp agency for super-powered people a feasible business? On top of that, was the throwaway mention of Heroes-for-Hire enough to discourage further comparison? Also, do you know where I can buy a “Bear with Me” poster?

Spencer: You buy it at Burly Books, of course! And just let me say that I love Burly Books as a setting. Williams and Leth infuse this humble Brooklyn LGBT-themed bookstore with a boatload of personality, both architecturally and in terms of the items it stocks.

I could probably spend hours pointing out all the fun background gags here — it’s a level to detail few artists put forth, but in just one issue Williams has already established Hellcat as a book that rewards readers with dense panels where even the backgrounds tell a story. Just take the sequence in the bar. As Patsy and Jen talk, in the background we see the three bros notice them, talk amongst themselves, and finally approach the girls; all-in-all, their approach encompasses four panels before they even speak to the girls!

In that same scene, as Patsy and Ian talk, we also see Tom and Jen have an arm wrestling match in the background. These two just met on the previous page, and Jen obviously isn’t going to lose, but despite that, they’re up for a quick, friendly match anyway, and seem to be having fun — clearly, these are both characters who are down for a good time and don’t take themselves too seriously. None of these details are strictly necessary, but they do wonders to flesh out these characters — be they main or throwaways — and make them feel real and three-dimensional.

These same kind of details can be used to establish location as well.

This shot may not describe this exact location to a t, but it’s a fascinating microcosm of Hellcat‘s New York City setting as a whole, all distilled down to a single panel. Just look at the sheer variety of characters walking through — Williams takes no shortcuts, and seeing this many unique characters in a single panel makes Hellcat‘s NYC feel like the real deal, in all its bizarre, diverse glory.

(Also, I want to read a whole series about that kid in the dog hat. He looks like he’s going places.)

It probably doesn’t even need to be said, but this skill obviously translates to larger details as well. Under Williams’ pen Patsy’s very form shifts depending on her mood and the tone of the scene; Patsy can go from being a fearsome superhero to a stunning “romance comic” character to an adorable “chibi” from panel to panel, and it never feels jarring because it’s always true to who Patsy is at that exact moment (and that’s exactly who Patsy is — a character who lives in the moment). Color artist Megan Wilson gets in on the fun as well — along with some clever flourishes (such as the explosions and sound effects surrounding She-Hulk all being green), she expertly uses color to dictate character, mood, and emotion.  For example, Wilson generally gives us a bright, sunny palette, but is willing to drop that when Patsy gets darker or more introspective. 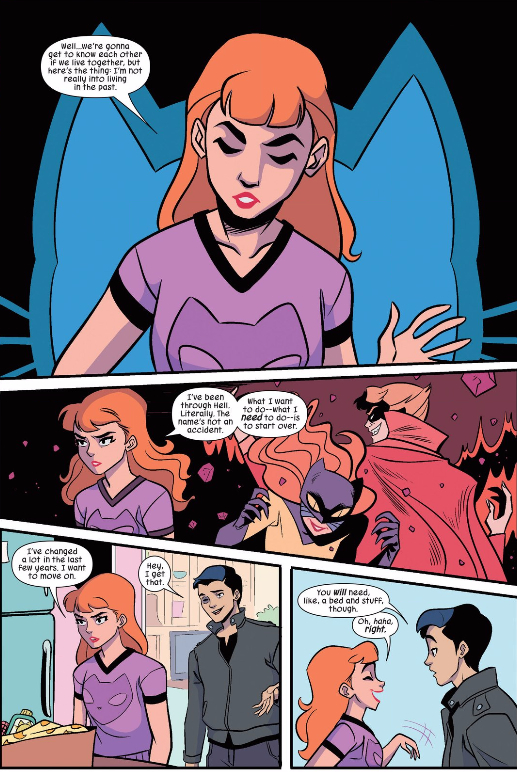 The choice of the black background is appropriate, but what I really appreciate is that even the yellow on Hellcat’s costume in the flashback panel is muted; this was a dark time in Patsy’s life, and Wilson makes that as literal as possible. I also love how Patsy’s hair is levitating a bit here, but is completely back to normal in the next panel — is that her mystical powers, or is her imagination just running away on her? With Hellcat, who’s to say?

Ryan, you asked of a temp agency for superheroes is a feasible business idea. I’d say so, but more importantly, it’s a brilliant plot engine for this comic. Working retail and running a temp agency opens Hellcat up to a wide variety of comedic plots — throw the “superpowered” bit into it, and suddenly you’ve got the set-up for what could be some fun, unique action plots as well. Then there’s Patsy’s past as a romance comic star — watching a character so absolutely determined to start over and live in the present be forced to confront their past should provide a powerful, perhaps even poignant emotional core to these stories. I guess what I’m saying here is that Leth and Williams may have just come up with the perfect premise for a Hellcat series. I can’t wait to see what they do with it.

I will admit that, if anything about this series gives me pause, it’s how similar it feels to many of Marvel’s other offerings. In the comments of our some of our recent articles, some of our readers have mentioned how the majority of the “All-New All-Different Marvel” books focus on whimsy and humor. That’s certainly true of Hellcat, and it’s easy to see this book drawing inspiration from titles like Hawkeye and Unbeatable Squirrel Girl. Is that a bad thing? I’m sure a few readers might think so, but honestly, with an end result this fun, I’m going to answer that with a resounding “no.” There’s nothing new under the sun; as long as the execution’s good than I’m all in, and man oh man are Leth and Williams nailing the execution right now. If they can keep this level of quality up, then we can skip right past that second date — I’ll be ready to propose.