Taylor: The old adage goes that silence golden. If nothing else, being a middle school teacher has taught me that this is true. Don’t get me wrong: I love it when kids talk and discuss in class, but the only time I’m not with a room full of kids during the day is my 20 minute lunch break. More than even my lunch, what I treasure about the my break is the beautiful silence. No kids yelling, no scuffing shoes, and no one to interrupt me. Point is, silence is golden. In monthlies, it’s clear that authors often feel the need to pack in as much information as possible. Reasons abound for this and the place to discuss that isn’t here. However, I quiet moment in a monthly is such rare thing. Darth Vader 20, on the other hand, has mastered the use of the pregnant pause, to great effect.

Vader has been recalled by the Emperor after successfully quelling the rebelling in the Sho Torun empire. The reason Palpatine wants to meet is that he has some choice words for Vader. Outwardly, these words take the form of a motivational speech that amounts to a combination of a Sith history laced with the usual Palpatine hint of doom. Throughout the speech, the Emperor makes a point to mention Cylo and his failed attempts to supplant Vader. Vader, in an unusual bought of defiance, isn’t suffering this insult from the Emperor.

Pointing out that the Emperor commissioned Cylo’s acts, Vader makes the point the not only did Palpatine try to kill him, but that he also views him as replaceable. After this dialogue, creators Salvador Larroca and Kieron Gillen allow for a panel with no dialogue or action, only Palps and Vader staring each other down. The way this final panel (the last on the page) stops the movement of the the entire issue is fantastic. It’s a full stop that’s so hard you could probably here a stormtrooper cough three decks down. The tension in this panel is palpable (pun?) and nowhere else in this series is it so clear that Vader and Palpatine hate each other. However, they’re forced to endure this Mexican standoff because they still know that they need each alive, for the time being, to achieve their ends.

Larroca and Gillen use this same technique later in the issue when Vader confronts Thanoth on an isolated planet of ice. 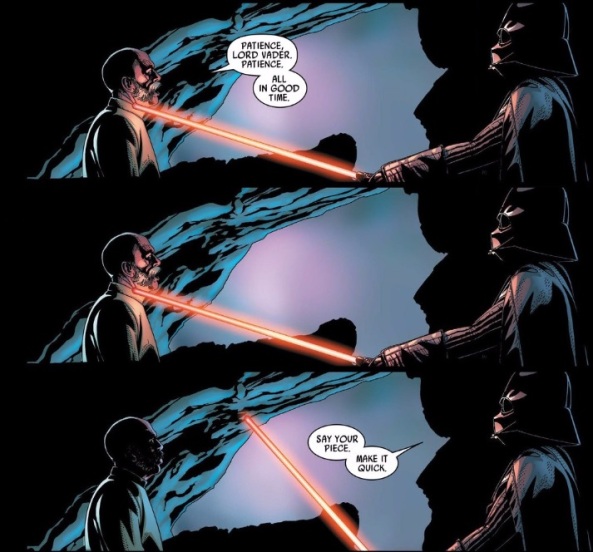 The emphasis on the stop here is more nuanced, however, because the perspective on the characters in the scene remains the same. While it’s easy to read this page quickly and not take in the full effect of this stop, I find a slower read of the page to be quite rewarding. Similar to the scene with Palpatine, the break in speech and action here creates tension in the scene. Will he or won’t he cut Thanoth down? The answer is no (for now) but it gives you a good idea about the relationship between these two men. What’s more is that you can practically hear Vader’s thoughts in his head as he weighs his lethal decision. This is a different kind of stop than the one with Palpatine, but the tension it creates in each scene, despite it’s different sources, is just fascinating. This is true character work here that is a great example of how to show character’s thoughts and feelings rather than explain them.

After watching an episode of  “Every Frame a Painting” that discussed how long an editor chooses to rest the camera on an actor’s face to show emotion, I applaud how the creators of Vader are doing the same thing in comic form. It’s clear that both Gillen and Larroca put thought into these stops and that they did so with good reason. Where a lot of comics seem afraid to let things rest for a moment, the creators of Vader recognize that silence is not only golden, but powerful.

There’s a bonus section at the end of this issue called The Misadventures of Triple-Zero and Beedee, which, while not exactly quiet Vader, still has some great character moments. Unsurprisingly, the lion’s share of these go to Triple-Zero who is absolutely bone-chilling in this short. After it becomes clear to Triple-Zero that the man working on his arms knows who he is, he asks him to put his arms back on, in the most menacingly way possible.

Perhaps it’s the shadow over his face or perhaps it’s the glowing eyes, but this is just terrifying. What makes this all the more astounding to me is that this is the same face of Threepio, the protocol droid who couldn’t even defeat a single Ewok if he had to. That he’s so scary here is a testament not only to Gillen’s writing, but also to artist Mike Norton, who makes me realize that maybe Threepio’s face is actually terrifying in and of itself if isolated from the protocol droid personality. Those wide eyes, the always-open mouth, and the not-quite-human-not-quite-robot bone/frame structure of the Threepio character design are actually somewhat unsettling.

Patrick, do you find Triple-Zero as frightening as I do? And what about Vader and Thanoth’s deal? That didn’t play out the way I thought it would. Your thoughts?

Patrick: Triple-Zero is a genuinely terrifying presence in this series. So I guess its appropriate that he’s emerged as one of the stand-out fan-favs from this series. That’s kind Darth Vader’s meta-arc in miniature, right? Vader’s such a compelling villain that fans latch on to him from the first couple minutes of A New Hope. For as much as we recognize and respond to Luke’s traditional Hero’s Journey, or the jokey Chorus of droids, or Han Solo’s devil-may-care adventuring spirit, there’s an intangible, unquantifiable appeal about Darth Vader. That appeal trumps everything else. In the race for “Favorite Evil Character in Darth Vader,” Triple-Zero has a lot of ground to make up, but it’s fascinating to watch him climb that latter.

Taylor, you talked a lot about the power of silence in this issue, and I think it’s worth pointing out that this is an extremely chatty issue – particularly for this series. Those silences are every bit as powerful as you suggest, but it’s worth noting that Darth Vader himself is the single biggest reason there is so much silence in this issue. In that scene Taylor posted with Vader’s lightsaber at Thanoth’s throat, Thanoth is waiting for Vader to respond. ‘Waiting for Vader to Respond’ could well be the name of this issue – both Palpatine and Thanoth talk themselves in circles trying to placate him. And they both reach into Vader’s past to try to get at some kind of humanity in him: Thanoth calls him Anakin, and even bandies about the name “Skywalker” knowing that family matters are one of the few things the Sith Lord cares about anymore. And earlier, Palpatine track’s Anakins entire rise to power, fall from grace, and re-rise to power. They’re both engaging in that thing that we always feared would rob Darth Vader of his awesome, awesome mystique: exploring his past.

But Darth Vader won’t have it. Thanoth and Palpatine are politically powerful, but they cannot hurt him if he doesn’t play their game. You’ll notice that any time Vader speaks — and it’s super rare in either of these conversations — he sticks to short, matter-of-fact statements. I love this moment when Palpatine dances around his rationale for recruiting Cylo in the first place.

Larroca keep Darth Vader a huge presence in these first three panels, even when he’s cropping him off below the shoulders or at the waist (as in the first two panels). When he does speak in the third panel, he states only “You made a mistake” which is so pointed and chilling, you can’t help but feel like he has the upper hand. Larroca supports that idea by drawing Vader’s entire body, looming hugely over a small, lumpy, nondescript Emperor. Larroca even throws up an extra panel divider in there — notice that the camera is stationary between panels three and four — further emphasizing the apparent size disparity between the two characters. And then in that final panel, Palpatine has shrunk down to a footnote, crowded out by his own dense monologue.

Which brings me back to Triple-Zero. If Darth Vader is the de facto hero of the series, we have to consider those that oppose him to be the villains. This series is careful not to put him at odds with the big heroes we know from the movies, but against a) other known villains or b) new characters. The best nemeses for Darth Vader are always those that are attempting to control the uncontrollable force through politics or manipulation – in short: talkers. Palpatine talks, Thanoth talks, Darth Vader acts. So the fact that Triple-Zero gains so much of his power and influence through speaking — be it in feeding the fire of his own legacy with that poor droid-repair guy, or in threatening to drain enemy combatant’s blood in the battlefield — positions the droid to be one of Vader’s enemies in the future, doesn’t it?