Patrick: My mother used to teach first grade, and just about every Christmas, there’d be some little shit in her class that insisted on telling all the other kids that there was no such thing as Santa Claus. Since she was their teacher – their trusted source of ALL INFORMATION – the question would eventually make it up to her. And never in private: kids would interrupt a math lesson to ask “is Santa real?” Now, if you don’t already know my mother, you should know that she’s got a kind of Midwestern / German stoicism that’s practically blinding and she’s got almost 40 years of experience avoiding difficult conversations with children. So she’d turn the question back on them: “some people believe Santa Claus is real and some do not – what do you believe?” And, naturally, the kids that are the most hurt by the notion that Santa could be made up chose to believe. My mother hasn’t crushed any little hopes, but she also hasn’t been dishonest either. She allows the power of the myth to be it’s own magic, just like Grant Morrison and Dan Mora do in Klaus 6.

Though, that’s probably where the similarities between Morrison and my mother end…

Actually, the power of belief may be the single strongest theme of this issue. We don’t get too much kick-ass Santa action in this issue – our hero spends most of the issue injured / tied up / transforming into some kind of benevolent wendigo. Morrison has previously done such a great job of conflating the Santa myth with the superhero myth that regular readers don’t really need the reminder that Klaus is a neigh-unstoppable bad-ass. But we see the character in a weakened state at the start of the issue, being led back to his house by young Finn. Klaus insists that he needs his medicine, which Finn assumes in magical in nature. The writing that follows is some of Morrison’s finest, and it drills right down to the power of the Santa myth (and possibly to the power of ALL myths). 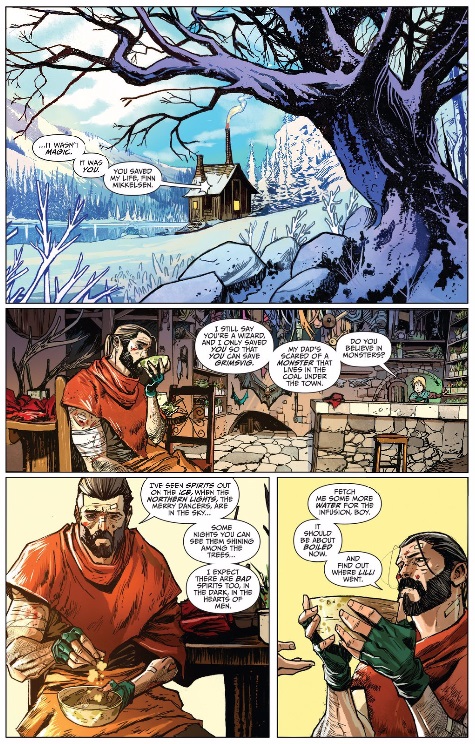 I know the text is a little hard to read at this size, but the gist of it is that it isn’t magic that saves Klaus, but Finn’s actions. Right on the heels of that, Finn reasserts his belief that the Santa is “a wizard” and then goes on to ask about the monster under Grimsvig. I love Klaus’ response, and just to make sure we can all bask in its poetic splendor, I’m transcribing it for us here:

“I’ve seen spirits out on the ice, when the Northern lights, the merry dancers are in the sky… some nights you can see them shining among the trees… I expect there are bad spirits too, in the dark, in the hearts of men.”

This description is vague enough that it’s not totally clear whether he’s referring to literal spirits — actual, tangibly magically creatures — or something more ephemeral. On the very next page, Finn will think he’s seeing those same spirits on the ice, only to discover that it’s really the light from the flaming arrows about to rain down on Klaus’ serene lakeside home. Finn is looking for too literal of an answer, and is necessarily disappointed that the dancing lights in the forest aren’t magical fairies there to save the day.

That’s how we tell magical stories in the real world – magic is something that you have to believe in to give it power. Same is true of faith, or love or friendship or whatever. Obviously, the world of Klaus is also one where some amount of magic literally does exist. The demon that rises from the mines a few pages later is some solid confirmation of this, as is the psychotropic freezing of Klaus’ heart in the final moments of the issue.

The heart-freezing sequence is one that I just adore, by the way. Mora is almost tasked with a drawing a sequence from Nameless, only y’know, with a more Santa-is-the-main-character vibe to it. So instead of veins and flayed dicks, the scene is all light and spirits. 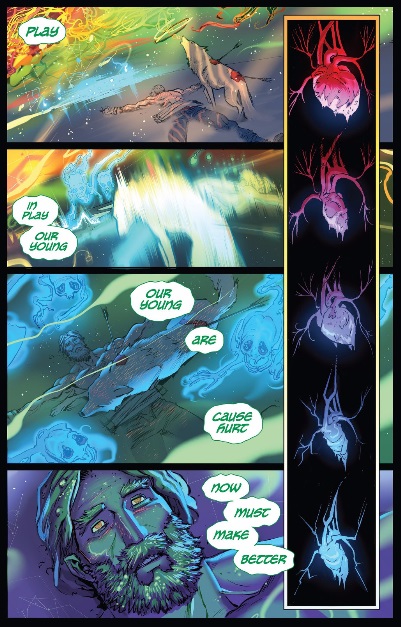 We do get a little bit of that sense of gore, though – whatever’s happening to that heart is sorta graphic. It is interesting to note that the image sort of becomes less upsetting as it becomes less human and more magical. By the fifth heart, that glowing blue design is positively beautiful. Also, it’s so rad that the number of hearts does not match the number of panels on the left side of the page. That adds yet another layer of subtle unexpected magic.

Michael, I guess the question all this poses is the following: do you feel more empowered to create the myth of the Santa Klaus in your head after reading this issue? There are some big, crazy buy-in ideas by the end of this issue — Morrison asks us to believe there’s a 50 foot tall demons that demands to eat children — are you ready to believe that as a matter of course?

Michael: What if just responded “Yes” and ended my reply? That would be something – not today though. I think the beauty of comic books and myths in general is the way that we can ascribe meaning and symbolism to the particulars of a story; that’s Retcon Punch’s philosophy, really. The 50-foot-tall demon in question is Krampus (peeked ahead to the next solicit, sorry?), and his desire to eat children could be interpreted as corrupting them. In the same way that “The Santa” is trying to bring joy to the children by lifting their spirits with gifts at Yuletime, Krampus wants to devour the children and bring them to a place of darkness and despair. You’ll also note that like Santa, Krampus himself is carrying a large sack over his shoulder. I’m sure we’ll find out what nasty treats are inside next issue. 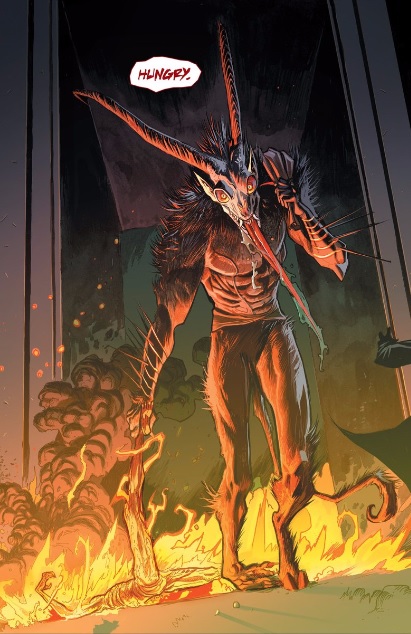 I find myself returning to the same themes and ideas again and again when talking about Klaus, issue after issue. Each issue we point out how Morrison is telling the legend of Santa Claus through the language of superhero comics – and that beautiful, wonderful notion never changes. Batman is such an elemental idea and hero so in the case of Klaus that’s always where my superhero comparisons begin. Again, I see a Carrie Kelley/Batman relationship in the way that Finn saves Klaus by bringing him to his home. How many times have we seen that in a superhero tale? The hero is wounded in the line of duty and a Good Samaritan comes along and takes them to a safe place to help them recuperate. Really, there’s probably a catalog of moments in superhero fiction where if there wasn’t a Good Samaritan the story would be over and the hero would be dead. The way that Lord Magnus burns down Klaus’ home reminds me in particular of Batman Begins but really can be applied to many film second act climaxes.

One of the reasons Klaus has worked so well is one of the reasons that I am so fond of Grant Morrison: he knows how to play on our collective familiarity with story without presenting it as completely needless retread. One of the prime examples of this is when Lord Magnus leaves Klaus for dead, pinned to the ice. To clarify it’s the part of the book where Santa Claus is crucified, depicted by Dan Mora: 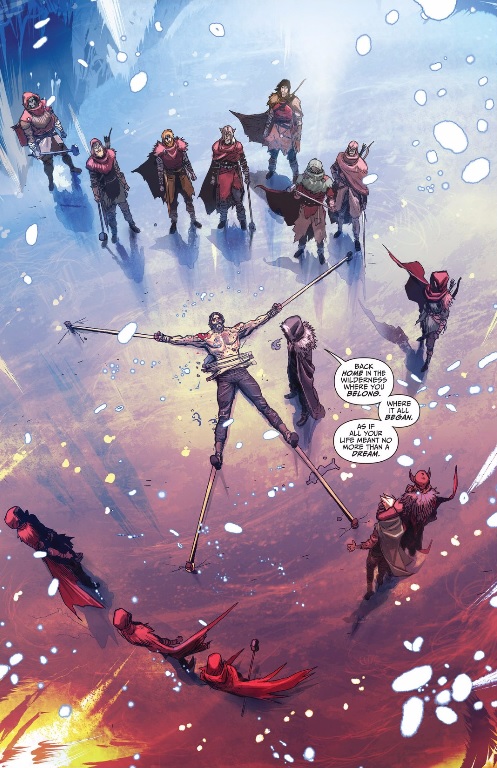 Sure, it’s not the typical kind of crucifixion per se, but it’s a death sentence nonetheless. Actually, it reminded me a lot of the crucifixion of the Lion-Jesus Aslan in The Lion, the Witch and the Wardrobe. Christ-like imagery is often overdone, but it’s not exactly explicit that Morrison is going for that. However I do enjoy the notion that Santa Claus is Jesus, given the annual “War on Christmas” BS of Christian Christmas vs. Secular Christmas. It’s a wonderful ouroboros fitting of Grant Morrison. Of course Morrison has done an excellent job at keeping this Santa Claus tale very non-religious; relying more on the pagan Christmas with the otherworldly forest spirits.

I’ve never watched a single episode of The Six Million Dollar Man but I can tell you that I think of that famous line “we can rebuild him; we have the technology” far too often. Naturally this phrase was running through my head at the end of Klaus 6 when the forest spirits come upon Klaus and “must make better.” That in and of itself is a popular convention of modern myth: the unsolicited, deus ex machina intervention of otherworldly beings. Patrick mentioned Morrison’s recent work of Nameless, but I’m gonna go a few steps back and mention Animal Man. Morrison’s Animal Man had the origins of extraterrestrial beings stepping in, rebuilding Buddy Baker on a cellular level and making the best possible Animal Man; essentially the writing/editing process. The spirits of the forest are doing something similar with Klaus as they save him from the brink of death. They take away what they see as non-essential (the human heart?) so they can build the best Santa possible. Hell yeah.