“Whoever wins, we lose.”

Patrick: There’s something comforting about the premise of a horror movie mash-up. Like, what the hell else would you expect when you put Freddie and Jason in the same room? They’re gonna try to kill each other, duh. Same deal with the Alien and the Predator. They fight and die and it’s awesome. Until, inevitably, it isn’t. At some point, the kids are going to team up with Jason or a Predator is going to befriend a scientist or something dumb like that. As long as the monsters are true to themselves, any “Versus” scenario can be a ton of fun. Adam Hughes’ Betty & Veronica is a “Versus” story in everything but name, so any assessment of the first issue comes down to the question: does he stay true to the fundamental nature of his monsters? Depends on what you think that nature is.

Taking cues from both Mark Waid’s excellent Archie series and Chip Zdarsky’s equally ebullient Jughead series, Betty & Veronica is overstuffed with jokes and charming chit-chat. The issue is narrated by Hot Dog, affecting a vocabulary that had me reaching for the dictionary. I’m a sucker for this kind of easy juxtaposition – the dog can’t know phrase a like “pulchritudinous protagonists!” It’s silly! And that silliness sets the issue off to a crackerjack start, and Archie and Jughead carry the tone forward with a thematically appropriate conversation about “who would win in a fight.” The first couple pages are dense bouquets of word balloons that had be chuckling pretty steadily throughout. That all comes to a stop when the guys happen upon the titular Betty and Veronica. 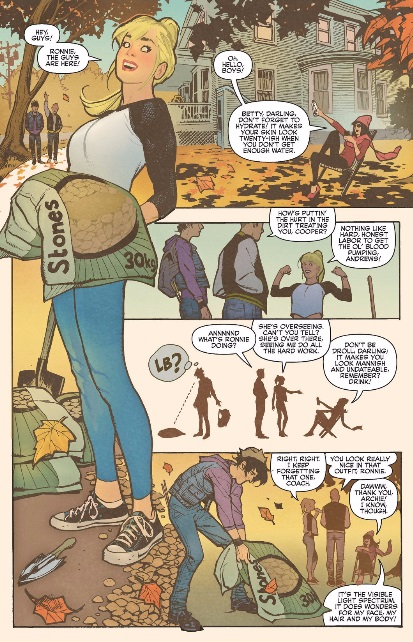 The jokes never trail off entirely, but it is interesting to note how little the girls participate in riff-a-palooza. Constantly joking around might be in the DNA of the greater Archie universe, but it doesn’t really play into B&V’s vocabulary. It’s almost unnerving: not only do the other characters and narrative devices (i.e., Hot Dog’s VO) embrace non-stop wackiness, it seems like even the world of Riverdale is in on the joke. The coffee chain that’s buying up Pop’s is called Kweekwegs Koffee, which is just the kind of literary allusion to Moby Dick that would have J. Farnsworth Wigglebottom III wagging his tail in delight. (“Starbuck” being the name of Ahab’s first mate and “Queequeg” being the name of his harpooner.) But even though everyone and everything else on the page loves to do bits, Betty and Ronnie aren’t engaging the world on that same level.

In fact, Hughes, through the voice of his dog narrator, kinda confesses that he may not have that much of a handle on Veronica as a character. Hughes’ art plays it for laughs — and I’ll admit that this sequence got a big guffaw out of me — but he also kind of plays it for horror. 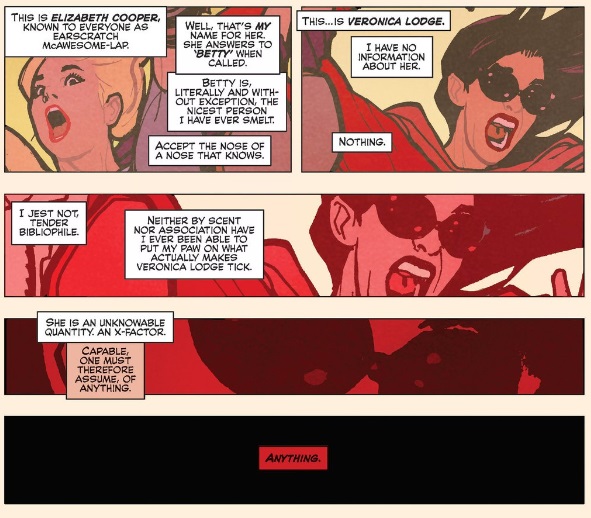 And Hughes can insist that Ronnie is capable of anything, but… well, it’s not like her actions her are surprising so much as they are strangely motivated. Why run Pop’s out of town? Unclear. But it’s also obvious that she’s pulling the strings all along. So we have to stop and ask ourselves: is this a fundamental quality of the monster known as Veronica Lodge?

It’s a little bit easy to make that call about Betty, who spends the majority of the issue being the quintessential good-next-door / hometown hero. She sings Riverdale’s praises and fights to keep it the same. She’s a good friend and, arguably, the hero of the piece. Which makes Ronnie the villain. Of course, no one can draw a hero / villain showdown like Hughes can.

But I guess my question is: is that fair to Veronica? In making Ronnie a black hat, has Hughes missed the complexity of the character?

Further speaking to the notion that Hughes is struggling with these character’s identities (and by extension, this series’ identity) is a strange little two-page insert which foregoes sequential storytelling all together. Hughes makes Hot Dog take the blame — the dog ate his homework, you see — and we’re left with a text-heavy exposition-dump. Which is fine, even kind of a cute idea, but Betty and Veronica do the recap in their bathing suits “in case that was the kind of comic you were expecting.”

I’ll be honest: that sorta was the kind of comic I was expecting. Adam Hughes is a phenomenal artist, but his work frequently boarders on cheesecake (and/or beefcake). There’s a place for this pin-up style art, and it can be totally cool and empowering and all that good stuff. I’m not convinced that place is here. Betty and Veronica are children, and they’re being undressed for the pleasure of the reader exclusively. But Hughes does raise an interesting point here: is this part of Betty and Veronica’s fundamental nature?

Ryan, I know you’re a long time fan of the lady’s of Riverdale. Where do you think Hughes nailed it and where did he fell short? Also, what do you make of the ever-present autumn leaves filling up Hughes’ pages? And lastly, that bit about clowns using closets as interdimensional portals shook me right to the core – Arch just made that up, right? PLEASE DEAR GOD TELL ME HE JUST MADE THAT UP.

Ryan M.: Of course Archie made that up. Everyone knows that the real clown portals are underneath our beds. When Pop mentioned being in the circus, I was worried about a third-act clown. Please, no third act clowns, especially because it’s likely the clowns would get better jokes than Betty and Veronica.

Patrick, I think you nailed it with your discussion of the way that the humor and riffing seem to happen around B&V but never really include them. The issue opens with a classic Betty and Veronica fight panel.

There are several markers that harken back to Betty and Veronica’s origins. The teens are all in mid-century dress, with Archie in his classic sweater vest – bowtie combo and the girls themselves in pencil skirts, pumps and pearls. Except for the expletive they are hurling at one another, this tableau feels familiar and could be found in any B&V book from the past 70 years. The dance is in the gym, with a large ’41 n the wall, a reference to Betty’s first appearance in Pep Comics. My primary complaint with this issue is related. The entire story feels like an issue of Pep Comics or Archie’s Pals and Gals. Sure, as noted above, Betty is the hero of the issue and Veronica the villain, but their relationship is sidelined in favor of bits and riffs for characters like Hot Dog.

There are a few moments in the issue that show Hughes has some handle on the dynamic between the girls. When we meet them at MeeMaw’s house, we see both Betty bemusement with Veronica’s “overseeing” and Veronica’s efforts to dole out advice that is both helpful (hydration is key) and insulting (you look old). The fact that Betty invited Veronica to hang out while she gardens and that Veronica spent her afternoon lounging in an old lady’s front yard is a non-verbal affirmation that these girls like to be together. This is obviously a very close read on what is essentially background for Jughead to act like a doofus, Archie to show up and get the gang to Pop’s.

Hughes handles each of the characters in a way that maintains a modern humor but honors their established history. The falling leaves that flow throughout the panel also demonstrate a complexity that a classic Archie would never attempt. They also add a sense of Riverdale as a real place, rather than a sterile setting for punchlines.  Plus, the leaves are really pretty. 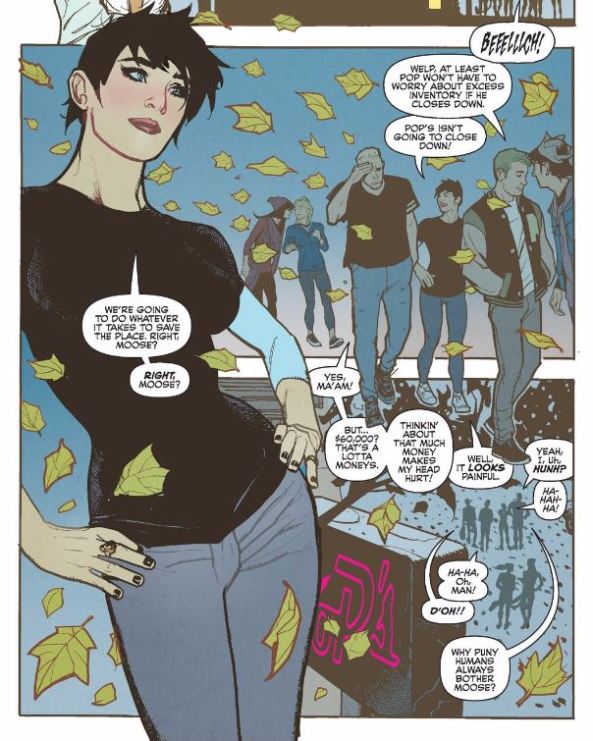 The way the leaves follow the gang as they wander the streets after leaving Pop’s are evocative of the feeling of being a teenager, late at night, walking with your friends. Even here, Betty and Veronica are in the deep background. Midge is given the cheesecake foreground position and an opportunity to tease her boyfriend, while Betty and Veronica walk behind, heads together.

Patrick, you pointed out that Veronica is given short-shrift in the story and this is another place where it would be great to get some insight into her perspective. As much as I love Midge and Moose’s dysfunctional relationship, the quiet conversation that we don’t hear between B&V is what is missing from the story. Veronica is having an entire arc that is shuffled to the back. She knows about Kweekwegs Koffee first from her phone call with her father. How does she feel about Betty’s passion that Riverdale must never change, especially when that goes directly against her beloved father and his business? There is a real reason for Betty and Veronica to be angry at each other in the final page of the issue, but we don’t get any build-up. It is only the first issue and perhaps Veronica and her friendship with Betty is supposed to be opaque and become clear as the arc progresses. As it stands, though, this is a story in which B&V are the objects rather than the subjects.

On that “objects” note, the two page bikini interlude was also disappointing as a fan. Pin-up pages are a mainstay of the Betty & Veronica world, and this was a simple and amusing way to incorporate one, but I love the Pin-Ups for the fashion and you can’t even tell what their bathing suits look like. It’s all teen flesh and no cute outfits. When I read Betty & Veronica growing up, it was clear to me that the books were written for a girl like me. There was an advice column about how to deal with friend and boy issues, you could submit outfits that the artists would draw onto B&V, and the stories were about two female friends who represented the collision between the drive to be a “good girl” and desire to go after what you want without apology. The audience for Hughes’ book is markedly different and by allowing the focus of the book to wander beyond the eponymous duo, Hughes chooses to bypass the central relationship that made the classic books so charming.