Spencer: Ever since the character was reintroduced after Crisis on Infinite Earths, DC has had a hard time figuring out just what, exactly, to do with Supergirl. Remember the time she was an angel, or a blob of protoplasm, or a Red Lantern, or Darkseid’s minion, or simply an obnoxious brat in a belly shirt? Supergirl Rebirth 1 finds Steve Orlando and Emanuela Lupacchino soft-rebooting Supergirl once again, and while they take some obvious inspiration from her current television series, they thankfully seem to be cherry-picking the show’s best qualities, particularly Supergirl’s ability to empathize with and inspire others. Unlike some of the other directions I mentioned, this take on Supergirl doesn’t feel like a gimmick or a phase, but a genuine attempt to give her a place in the DC Universe all her own, while still honoring the Superman mythos. Only time will tell if this is the take that sticks, but I wouldn’t be surprised to see Orlando’s Supergirl catch on fast.

If Supergirl Rebirth 1 has a weakness, it’s that it can be too expository at times, but that’s just part-and-parcel with these Rebirth one-shots, which are tasked with establishing the mythology of the series to come. Supergirl Rebirth does that well (and finds an appropriate, and fairly natural, exposition mouthpiece in Cameron Chase): Kara Zor-El wants to carry on in her late cousin’s footsteps, but to do so, she needs the D.E.O.’s help rebooting her dormant powers. They agree to do so (by shooting Supergirl into the sun!), but only if Supergirl will then work for the D.E.O. and, under their guidance, take on a human identity in order to better understand life on Earth. While we only get a brief glimpse at Supergirl’s life as Kara Danvers, it already feels like a vital part of Supergirl‘s central themes.

Again, if I had to take a stab, I’d say those themes are compassion and empathy. After all, Supergirl stops Lar-On’s Red-Kryptonite werewolf rampage (new band name!), not by physically defeating him, but by talking him down, by finding common ground.

It seems important to note that Kara’s empathy here sets her apart from her father, who quarantined Lar-On to the Phantom Zone in the first place, and is implied to have done much worse to others. Perhaps Kara learned this quality from Superman, perhaps she learned it from Earth, or perhaps it’s just an inherent part of her personality; regardless, when Kara’s father returns as a villain (as the end of this issue teases), this difference between them will likely be a major point of contention.

Chase herself admits that she sees potential in Supergirl, and her ability to display empathy on this level is likely a part of why Chase insists she take up a human identity in the first place. Kara can connect with Lar-On because they’ve been through similar ordeals, and Chase (as well as the Danvers) wants Kara to be able to better understand what it means to be human so that she can do the same with the people she defends every day. While we really don’t have any idea how Orlando and Lupacchino will play out the “high school secret identity” aspect of the book — fish out of water humor? Teenage drama? An attempt to tackle teenage “issues”? — it seems pretty likely that Kara’s quest to learn more about humans won’t just be a minor element of the title, but a major step in Kara’s becoming a better hero.

The D.E.O. half of the book, meanwhile, is already rather well defined. The D.E.O. itself provides an easy source of conflict for the title, and the dynamic between the calm and straightforward Supergirl, the cynical and sarcastic Chase, and the enthusiastic, doting Danvers family is already a joy. I can’t wait to see Orlando dig into these characters further.

Emanuela Lupacchino on pencils, Ray McCarthy on inks, and Michael Atiyeh on colors provide a striking, inviting aesthetic to the issue. I enjoyed Lupacchino’s work on Starfire, but her layouts especially really seem to have opened up on Supergirl. She has the space to craft remarkably cinematic moments, which particuarily makes the return of Kara’s abilities a cheer-worthy moment. 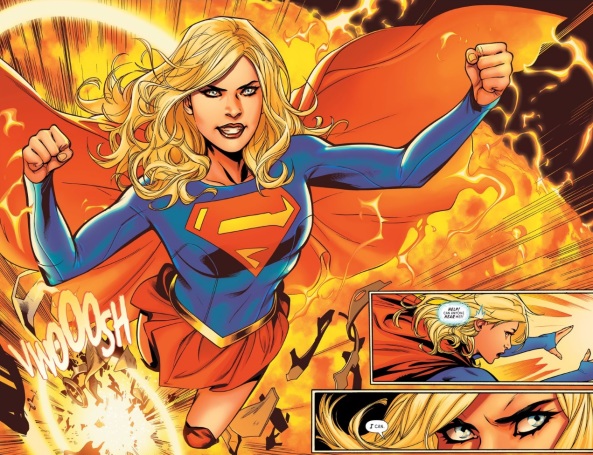 That last panel actually reminds me of Adam Hughes, which speaks to how much detail and life Lupacchino, McCarthy, and Atiyeh provide Kara (and also probably explains why Hughes got a variant cover on this). It’s not just pin-up moments, though; the artistic team also have an excellent grasp of motion and action as well.

The action is incredibly clear, yet the artistic team never loses the sense of grandeur surrounding Kara throughout the sequence.

I also adore Kara’s new costume, which eschews icky touches like the belly shirt or the “shield-crotch” for a more classic look, yet also includes a few New 52 elements (the seams, Kara’s logo). If there’s one element to the art I’m not as fond of, it’s all the blonde women in the book. There’s enough minor differences between Kara, Chase, and Eliza Danver’s hair styles and clothing that I never got them mixed up, but it is a bit much whenever I see them all together on the page. Some more variety would be nice.

All-in-all, though, I’d call this an auspicious start to the next phase in Supergirl‘s career. What about you, Mark? Also: is that a man-bun Lar-On’s rockin’? Krypton really was ahead of the times.

Mark: I’m a big Steve Orlando booster, and Supergirl Rebirth 1 continues his winning streak. Possibly more than anyone else writing for DC today, Orlando shows a clear understanding of what draws readers to each character he touches. His Midnighter run was one of my favorite books of the New 52, and I can’t wait to see what he has in store for Supergirl.

You’ve already highlighted my personal favorite sequence in the issue, Spencer: Kara stopping Lar-On’s rampage and destruction by showing him empathy. It’s the perfect crystallization of why the Super Family of characters has endured. Yes, her powers give her insane strength and speed and she totally could have punched Lar-On through the moon if she wanted to, but what really makes her great is her character. This sense of inherent kindness and goodness was almost entirely absent during the New 52 (across all of the Super Family titles), and while Rebirth has found new creative teams paying (welcome!) lip service to Superman’s nobility, Supergirl Rebirth 1 is the first title to really show our Kryptonian’s greatest strength in action.

I’ll also heap additional praise on Kara’s new costume, which tows the careful line between classic and modern, sexy without resorting to panty shots and cleavage windows. While we all look back on the ridiculous costumes female superheroes were relegated to in the 90s and laugh/cry, I’d argue that the first ten years of the aughts were just as embarrassing. Change has been slow but is finally beginning to pick up steam as more diverse collaborators are given the opportunity to work with these characters. DC’s first real stab at representation, DC YOU, was clunky and sometimes pandering, but Rebirth is showing a lot of signs that things are finally clicking into place.

[Unrelated but I am always interested in DC/Marvel parallels and coincidences, and I can only assume that Marvel’s Carol Danvers (aka Captain Marvel) was purposefully named as a pointed shot across the bow at DC’s Kara Zor-El/Linda Lee Danvers (now Kara Danvers). Granted, Captain Marvel is more a mix of Green Lantern and Superman than straight up Superman, but debuting only a few years after Supergirl I like to imagine Captain Marvel’s creation was another move in the never ending DC/Marvel game of oneupmanship.]