Michael: The murders of Thomas and Martha Wayne: imagery that has probably become as iconic as the crucifixion of Jesus Christ. We’ve seen these two lovely rich folk get shot up so many times in various Batman stories that they have negative lives racked up. How many times can we go back to that well and find something of value? Batman 12 doesn’t replay those deaths yet again but it does try to draw new perspective from them — but does it work?

It’s hard to believe that we are in part four of the “I Am Suicide” arc as not a whole lot of plot has been advanced, big picture-wise. The long and short of it is this: Batman recruits his “Suicide Squad,” invades Santa Prisca, gets caught and then is betrayed by Catwoman. Okay, I’ll admit that’s a whole lot more plot when I type it out. Maybe what I’m feeling is a lot of steady build-up, presumably to a Batman/Bane showdown? There’s an interesting contrast at work here as Tom King dives deep inside Batman’s pathos and philosophy while Mikel Janin’s widescreen action – King goes internal, Janin goes external.

Over half of the issue is Mikel Janin putting in this kind of work. He gives Batman the kind of fluid motion that we typically see in Dick Grayson – something that most likely comes to mind because of King and Janin’s work on the former Grayson title. With an issue that is over 50% double-page-spreads, Janin keeps things interesting by showing us a whole catalogue of different styles of the more epic form. Batman is going to beat every goon and henchman that he comes across on the way to Bane’s throne room – that’s a foregone conclusion. Janin’s job then is to give us those sequences in a unique and attention-grabbing way. Perhaps the most unique of these is when Batman is scaling the side of the castle, in a Where’s Waldo-esque action scene. 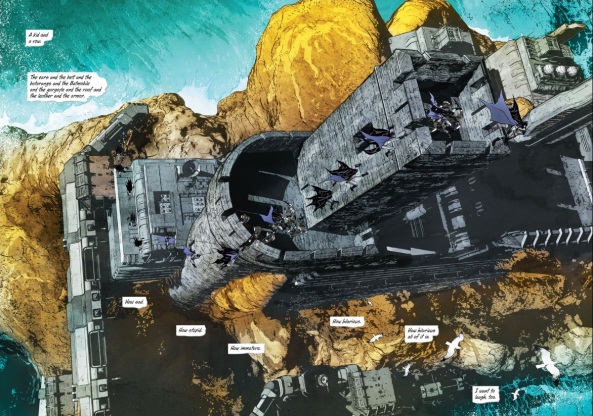 Now we arrive at the moment in the issue that many readers are likely talking about: following his parents deaths, a young Bruce Wayne came very close to committing suicide. I suppose that there are some readers out there who will find this to be a world-shattering, status-changing revelation. Personally I don’t find this to be all that shocking or off-base; Batman is a moody son of a bitch that dwells in the darkness after all. How many times have detractors – fictional and otherwise – criticized Batman’s actions as being suicidal? Batman leans in hard on the futility and pointlessness of existence: his constant state of feeling dead inside. Even for Batman, it’s a bit much.

It’s important to keep in mind that though all of these dark thoughts appear in the same format of a traditional Batman internal monologue, they’re actually the contents of his letter to Catwoman. Does that mean that Batman might not exactly mean 100% of the things he writes? Tricky to say. On the the one hand, Batman is trying to appeal to Selina’s humanity, trying to coax her out of committing to her new murderous M.O. On the other hand, that very appeal is being built upon complete, brutal honesty – so it would be pretty fucked up if he was lying. I suppose that my main issue with this is that I don’t like believing that Batman is completely and utterly joyless – at least not to such a nihilistic degree that he is the walking dead.

However it is from that more nihilistic place that we some rare self-deprecating humor from the Dark Knight. He might not find it humorous himself but Bruce has the self-awareness to know how laughable his whole career as Batman is. He talks about “the leather and the armor,” the idea of himself as a grown man perched on a gargoyle, ready to “punch crime in the face.” Punching crime in the face is what Batman is all about – I’m just glad he could finally admit it himself. Batman 12 is all about King diving deep into Batman’s psyche. My favorite part of the script was a subtle part when Batman writes “All of them can laugh. Mother. Father. Him. The whole world.” Him. I can’t be the only one who took that to mean the one who laughs at Batman the most: The Joker. Batman won’t even give his archenemy the courtesy of assigning him anything greater than a pronoun – I love it.

I’m a little fuzzy on where I land with the message of this Batman 12; it feels like the issue itself is too. One thing I think King nailed was describing the birth of Batman. He writes about a boy in pain praying to god who isn’t there or doesn’t care. God doesn’t answer so the little boy has to create and become his own god. It’s a heightened twist on one of the central ideas of Batman: Bruce becomes Batman so no one else will ever lose what he did and be forced to become like him. It’s interesting, there’s a lot of meat to chew on in this issue: one whose action doesn’t correlate with the visual narrative most of the time.

Patrick did you enjoy diving into Batman’s head yet again? Do you think anything was added to the overall mythos by throwing in the “I Am Suicide” twist? How do you perceive the Bat/Cat relationship at this point? 237 murders is a LOT to forgive for a man with a no kill code.

Patrick: Well and let’s throw in the most recent betrayal while we’re at it. We got a lot of shit a few weeks ago for praising King’s characterization of Catwoman (Selina’s fans are protective of her morality, it seems), and while I’ve got no dog in that fight, it sure does strain credulity that Bats would put up with a mass-murderer for so long. I suppose that’s me being protective of Bruce’s morality, but, y’know, that’s his no-kill code, not mine.

Let’s talk about this “I Am Suicide” twist a little, as it is by far the headiest idea of King’s run on Batman. Batman’s letter says “… the dead know that death is a choice. They don’t take that choice from anyone.” That sorta fucks up our concept of what “death” is, right? There’s no way that Bruce is arguing that his parents chose to be gunned down in that alley. It would almost appear as though King is working from a different definition of death, one that has more in common with transformation. Sure, it’s carries all the hallmarks of death — removing oneself emotionally, forsaking folly and generally embracing a macabre aesthetic — but it is not death.

But I think the “suicide” part of the analogy is apt. Or at least, intriguing. Suicide is elective death, rather than involuntary loss of life. It’s easy to think of Bruce as a victim, and he become a deranged vigilante in a batsuit as a result. King paints an ever-so-slightly different picture – one where Bruce inflicts the transformative punishment on himself. No one forces Bruce’s hand, he becomes Batman of his own volition. I guess how well that translates to “dying” and whether or not the idea that Batman is the solution dreamed up by the child that “died” that night is going to vary. Bruce’s letter to Selina is certainly poetic, but it’s hard to image that this thing is literal, right? Like, he clearly gives up his secret identity in a letter that’s going to be vetted by Arkham guards?

But then again, it’s not really like the letter makes suitable narration for the wham-bam action sequences that Janin stages here. This is exactly how the second issue in the arc went as well, with Selina’s confession scoring the non-stop punch-em-up. Michael’s not wrong to say that we’re not getting a lot of plot in these issues — a problem mitigated by the series’ ambitious release schedule — but we are seeing a lot of implied narrative about Bruce and Selina’s relationship. So while the whole “I Am Suicide” thing may not feed into what’s happening, or what’s about to happen next, there is something to the idea that Bruce feels such a profound and vulnerable connection to Selina. Does that forecast a triple-cross? Or will it just make Batman’s decision to deal with Catwoman more emotionally resonant (whatever it may be)? Future readers have us at a disadvantage, as this issue stubbornly refuses to drop the other shoe before teasing…

Janin’s storytelling throughout all of this is balletic, if a little unfocused. Batman fights through a seas of baddies, but it’s seldom clear what threat they pose or how Bats is able to overcome them. It’s not even until the end of the fucking issue that Batman even seems to be winded. Which is a shame, because the only thing better than Janin drawing Batman in action is Janin drawing Batman’s steely resolve.

Batman’s kind of checking himself out here, as Janin raises and lowers his head, scanning his own strength. King and Janin obviously subscribe to infallible Bat idea — Batman’s superpower is that he always wins — and it’s nice to see them stew in it for a page or two.

But, to Michael’s original question, “does it work?” – I honestly can’t tell yet. It is compelling, non-linear storytelling propping itself up on familiar Batman structures. Maybe it doesn’t matter if it works.