Spencer: In Descender‘s earliest issues, Tim-21 was easily its star attraction. That’s not to say I didn’t love everything else the series had to offer; it’s just that the sweet, adorable, largely helpless companion bot instantly captured my heart. Throughout their third and fourth arcs, though, Jeff Lemire and Dustin Nguyen have doubled-down on fleshing out the rest of their cast, allowing them to keep pace with Tim’s massive appeal. Descender 18 feels like the culmination of this work, yet throws in an ironic twist; the series distances itself from Tim-21 just as he becomes more important than ever to its central mythology.

Both these ideas are established through massive twists, so let’s talk about them both. The first comes courtesy of the UGC Council, who reveal that they want Tim-21, not to gather information about the Harvesters, but to use his codex to power man-made Harvesters of their own. 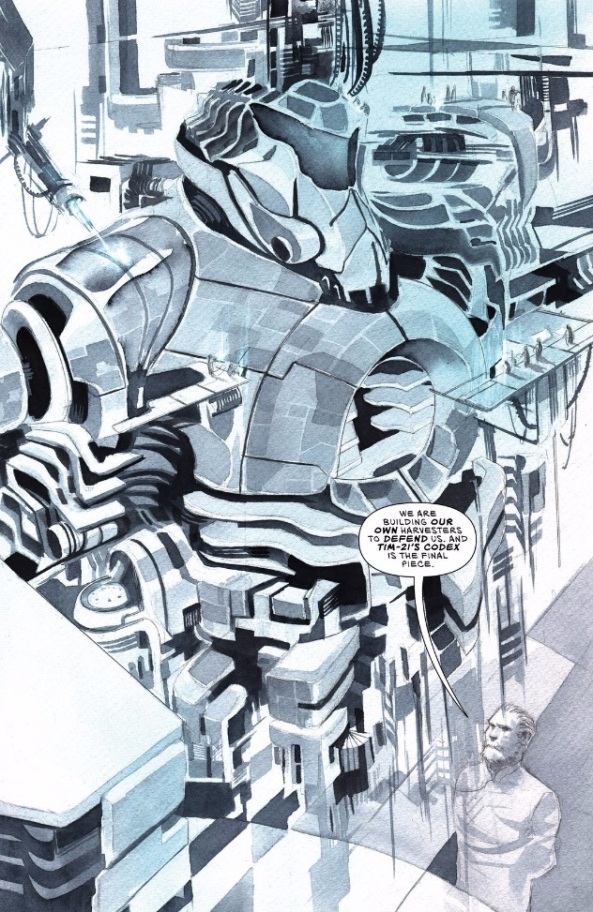 I just wanna take a moment to talk about how much I adore this page. As always, Nguyen’s sense of design and texture is spot-on, but I also love how the specific details of the Harvester begin to become more muddled the closer we get to the bottom of the page; its legs look more like a bunch of buildings, a city skyline. To me, this not only emphasizes this machine’s sheer size, but its staggering complexity as well — we can barely comprehend it. Then there’s the councilman down in the corner, staring up at his creation; I’m not sure whether he’s watching it through a window, looking at a hologram, or simply imagining the Harvester, but no matter what, the Harvester is emphasized over the councilman, who is almost a ghost, stripped of his color. If his plan fails, I suppose that’s exactly what he could end up as.

This development makes Tim-21 more important to Descender‘s ongoing plot than he’s ever been before, but like I said, Tim himself has been sidelined almost completely. Tim’s plot this month finds him, Quon, and Telsa escaping the machine moon after killing Tim-22, but it all turns out to be a misdirect; Tim-22 instead killed 21, changed his appearance, and infiltrated Telsa’s group. I highly doubt 21 is actually dead, but it does take him off the table for a while; even if/when he awakens, he’ll be separated from the friends who have accompanied him for most of his journey.

Instead, 22 is going to be taking 21’s place, and while he’s already proven himself a skilled actor and manipulator, he’s not quite living up to the part, especially when he goes into an impressive, but uncharacteristic (for 21), shooting streak against the Hardwire’s guards. Fortunately for 22, Quon and Telsa are too busy trying not to die to really be rattled by it, but I can’t imagine that’ll last forever. 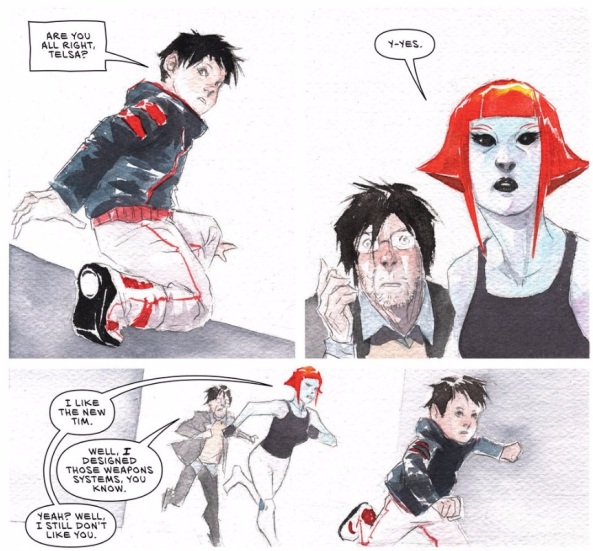 What interests me the most about this plot is what 22 may learn by imitating his kinder “brother.” Already we see him worry about about Telsa’s safety as the real 21 would, which in retrospect is clearly an act, but can he hang onto his anger and bitterness while imitating the sweetest bot in the galaxy? It probably depends on what kind of treatment he receives from Telsa, Quon, and any other humans he may run across in their adventures.

If 22 has any heart at all, I can’t imagine it going unaffected by Tullis’ sacrifice. Descender 18‘s third plot finds Telsa’s guard, Tellis, squaring up against a Solar Worm in order to buy Andy’s group the time needed to escape the planet Sampson alive, almost assuredly sacrificing his life in the process. The actual events aren’t the most compelling — the Solar Worm comes along arbitrarily, almost solely to force Andy’s group off the planet after nearly two arcs of hiding on Sampson — and while Lemire and Nguyen have been fleshing out most of the supporting cast, Tullis was still a rather thin, mysterious character. So while the loss of this specific character doesn’t really hurt, the loss of what he means to Telsa does. Tellis passes along a message that he’s always loved Telsa like a daughter, and after seeing Telsa’s relationship with her actual father, I can only imagine how this loss is going to hit her.

One thing I appreciate about the scenes on Sampson is how Nguyen differentiates the setting from the rest of the issue. 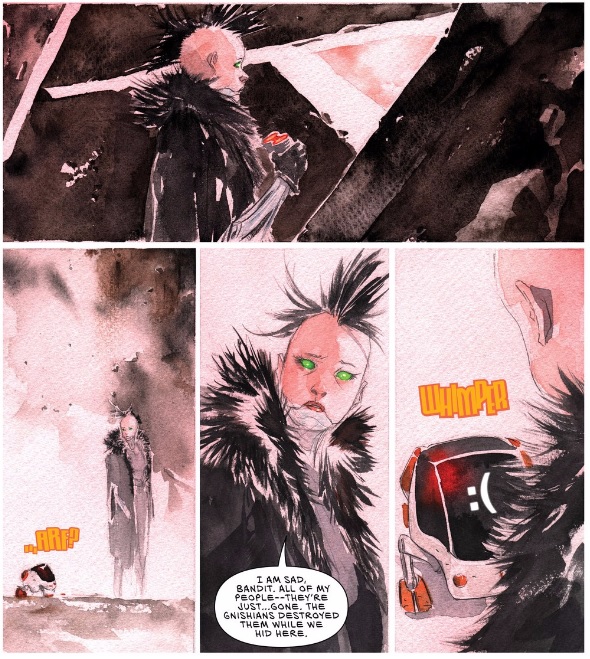 Again, I adore the specific textures Nguyen uses to paint the walls of Queen Between’s hiding space, but what I specifically want to point out is the gritty haze of red and black that hangs over Sampson in every single panel. It instantly shows that this is a desolate planet, and far different from the antiseptic whites (so pure that the backgrounds often bleed into the gutters) of the UGC Council room or the Machine Moon. Actually, those similarities might be just as important as the differences; if Sampson’s appearance sets it apart from those other settings, then does that mean that the UGC Council and the Hardwire are more alike (even if just in method, rather than ideals) than they’d like to admit?

(Bandit’s role in the above scene really touched my heart too, even if Between’s dialogue here is uncharacteristically blunt for this series. I have no idea when they’ll meet up, but if they do, I can easily imagine Bandit being the one to discover that 22 is masquerading as Tim-21 — even if no one can understand him).

Ryan! With so much going on in this issue, I’m sure you have some observations I completely overlooked. What were your thoughts on this one? And I know I kinda breezed over the death of Tim-21, but that’s because the issue basically does too. He’s gotta be coming back…right?

Ryan D: Right, Spence?? I hadn’t even considered the possibility that Tim-22 becomes the full-on surrogate for 21 and then is forced to undergo the slow-burn of touching its atrophied empathetic side like you theorized, to be honest, because my brain cannot envision this series without Tim-21. I think the plot supports this in the sense that the dreams of the impending return of the Harvesters come through him, and not the other child prodigy of team-machine. But I, too, am keen on the journeys the two companion bots shall separately experience until they (hopefully and invariably) meet again.

Speaking of the Tim-22 character and the small touches which could betray his infiltration of Quon and Telsa, I enjoyed the action page which Dustin Nguyen gave us here: 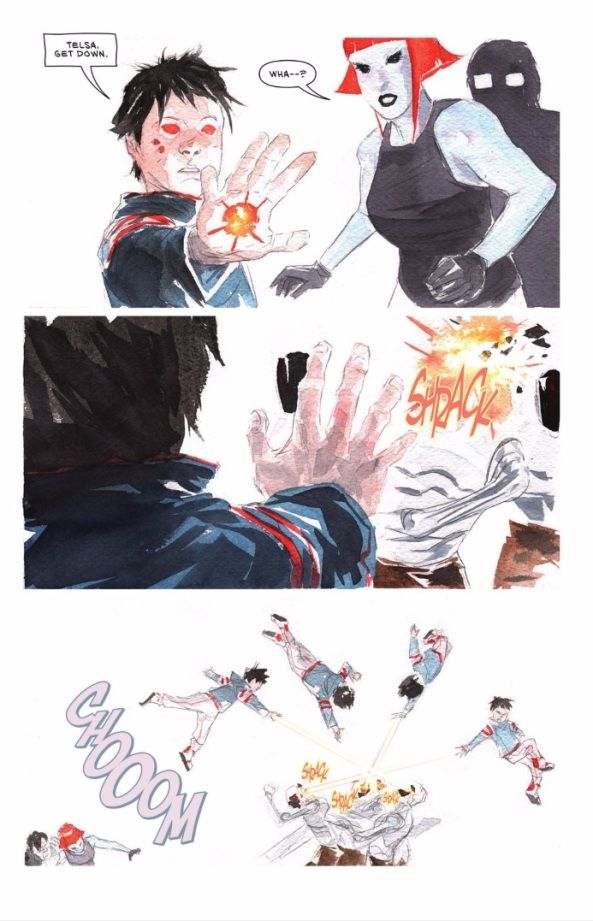 At first, I planned on showing only the panel of Tim-22 going full Tony Jaa bad-ass on the robot red shirts to praise Nguyen for letting readers know that the artist’s talents are not relegated to illustrating nebulae and sweeping planet-scapes alone; however, I then noticed the second panel. Something struck me as a bit odd, then, in the focal point of that panel: Tim-22’s hand, unleashing a volley of destructive energy. Hands have an inherent sense of intimacy about them, don’t they? They seem to tell a great deal about a person’s character or state. Here — and this may just be me — the hands of 22 strike me as somewhat over-large for the child-like body which he inhabits, and it makes me a bit uncomfortable. This feeling of uneasiness fits in perfectly with the trail of breadcrumbs the creative team drops for us and the humans in the comic throughout the issue as small hints of the deception in play. A small note about the first panel of the page: I love how we see the red eyes of Tim (breadcrumb!), then have our eyes pulled right to the red of Telsa’s hair, only to rest on the bespectacled silhouette of Quon — his glasses the highlighted feature — to keep the emphasis of the panel on the red of the eyes. Savvy.

Though it was not necessarily one of the two main plot twists, another moment deserves attention — the confrontation between Andy and his partner, Blugger Vance. This relation is essential for the further development of Andy as circumstances force him to confront the past against which he’s rebelled his entire life. I have been a fan of this duo since their introduction at the beginning of the series, the odd couple in the Space Dagger, living job by job, united in their trade: killin’ robots. Now that Queen Between/Effie/Andy’s first love re-enters the picture sporting her pro-robot ideology, what will happen to these two? Their relationship, after all, serves as a barometer for the ideological journey which Andy is undertaking. So, what did it tell us? 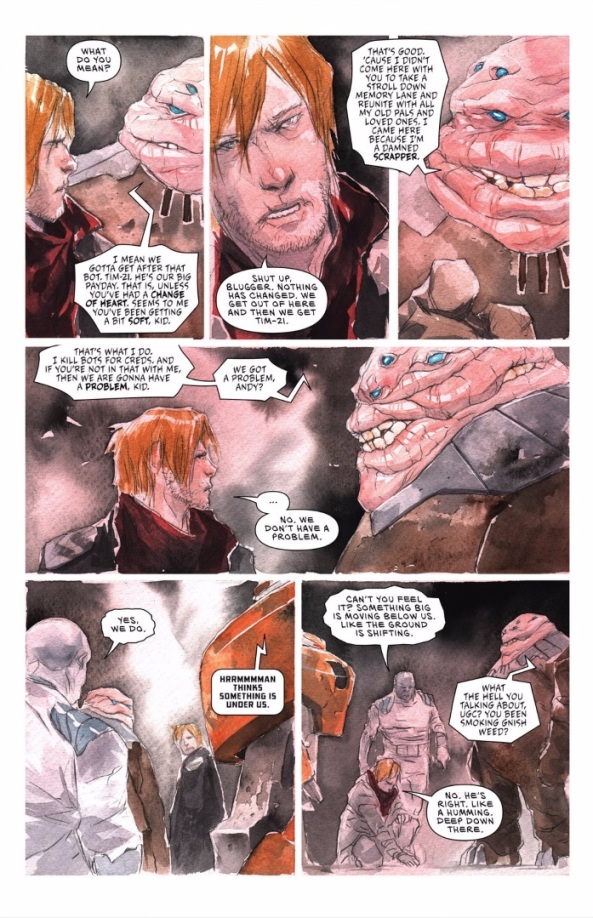 Nguyen deserves all of the praise he receives for his delicate, carefully conducted pencil work and water-color-esque coloring and next-level page composition, but I’d like to borrow some film terminology to see how he tells the story between Blugger and Andy here. We start on this page with a cramped double of the two, the combative nature of the conversation quite clear. Then we get into the bread and butter of capturing dialogue: the shot/reverse shot. I really appreciate how Nguyen uses the “camera” here in these singles. The panels include only the character speaking, with no trace of the other person involved to dirty the shot or give a more voyeuristic feel to the dialogue. The camera is also set within the confines of the conversation, which gives it a very personal feel — a trademark feature of the Cohens‘. On top of that, second panel puts the camera level with Andy’s eyes to allow the audience to identify with Andy and ease us into a sense of comfort, before putting the focus on Blugger with a low-angle shot to make the Gnishan look as imposing to us as he almost certainly does to Andy.

The real trick here shows in the wider mid-shot, featuring both the characters together. One of the greatest pro-wrestlers of all time, Shawn Michaels, has said that he, who stands just under six feet tall, loved working with very large dudes, some close to seven feet; the act of standing toe-to-toe with them alone immediately tells a story:

Big guy stands intimidatingly against the smaller opponent who refuses to back down. Boom — we already know our starting point. We see that here, as well; however, what is interesting is the contrast between the physical tension between Andy and Blugger versus the verbal acquiescence which Andy gives in the dialogue, which leads me to intuit that it was not Blugger’s physical menace which made Andy tentatively keep his space-hat in the “I scrap robots” camp, but their long-standing camaraderie. The next panel, then, concludes this stand-off by including Tullis and Driller, thus putting the quick conflict between Andy and Blugger back into the context of the issue so that the plot can move forward.

This struck me as an important issue of Descender. I think that, after all of the attention which Lemire gave to his characters’ backstories over the past arc, the plot needed a shot in the arm to keep the pacing up, and this issue certainly gave us that. Part of me is surprised that the revelations given arrive at only issue number two of this current five-issue arc, “Orbital Mechanics,” but I can only hope and assume that bodes well for the rest of this chapter in regards to more big events and chances to put characters on the spot — even if the chapter doesn’t feature as much Tim-21 as we might expect. But he’ll be back, definitely. As you said, Spencer, he’s gotta.