Patrick: Matt Fraction and Chip Zdarksy’s Sex Criminals plays with some very big, very difficult ideas. The thematic engine of this series spits out hard questions about identity, sexuality, morality and mental health, but it runs on moment-to-moment action. I’m talking about “action” in the basest sense — Jon and Suzie may have the power to stop time and rob banks, but no one is tuning in for that spectacle. I mean “action” like how we follow one statement from the speaker to its audience, tracking the psychological cause and effect in every second of the interaction. That’s what allows Fraction and Zdarksy to find the drama in Jon repeating “I don’t know how to do this.” His is a prison of inaction, of apathy. In highlighting the action that doesn’t really seem like action, Fraction and Zdarsky drastically alter the speed and intimacy of the story they’re telling.

Of course, it also helps that we’re re-introduced to this series with a recap-on-crack. The first ten pages of the issue catches readers up with the events of the last 15 issues, but it also aggressively re-asserts Fraction’s writing style. Actually, between the recap portion and the Letter Daddies sex-advice column in the back of the issue, it’s almost alarming how much space Fraction’s prose occupies in this issue. Not only is nearly half of the the issue words-on-a-page, but Fraction plows through years of Sex Criminals storylines, gleefully skipping around between eras and characters and weird appeals to his male readers to “fuck better.” It’s dizzying, and sets a pace in extreme contrast to the story that follows, which is largely a three-scene exploration of Jon and Suzie’s relationship.

The actual incident of the issue starts with a soft Nighthawks parody.

It’s a slow and comfortable transition into new story of this issue is both gradual and familiar. Not only do we get a send-up of one of the most famous pieces of American art, but we get to see all the characters Fraction was just briefing us on. It doesn’t take long for Sex Criminals to embrace its natural pacing and start packing the pages with 8, 9 and 10 panel layouts. And it’s not even like we’re zipping through story beats. At this exhausting pace, we’re in the diner for a full five pages. This is epitomized by the back-and-forth between Jon and Dewey.

This is frequently referred to in comics as “decompressed storytelling,” and it usually gets a bad rap for taking up space without burning through the story. It’s like a cost-saving, or effort-saving, tactic. But the section I just posted is only half a page, so even if we could get through this beat — which consists of intimidation and counter-intimidation — in like two panels, we’re talking about the same amount of page-space. Zdarsky is working his ass off to show us these moments between the moments. Look at the two panels of silence as Dewey’s lips tentatively release the straw and his eyes narrow, before delivering his zinger.

That’s the language that Zdarksy and Fraction establish right away in this issue. That way we’re not left to sweat over the subject that Jon and Suzie are fighting about, but rather the toll that the fight takes on them. It ends up being a show piece for Zdarsky’s acting skills, which manage to show vulnerability in Jon even at his most closed-off.

And, Drew, I don’t know if Jon and Suzie’s conversation hit home for you the way it did for me, but man oh man have I had this one before. Jon doesn’t set goals for himself because he doesn’t have high enough self-esteem to consider himself worthy of having goals. That kind of self-image even makes it hard to represent your own interests in such a conversation — if he can recognize what his interests even are. It’s all impossibly subtle stuff, and as someone who has lived through both sides of this frustrating conversation, I can attest to the emotional accuracy of the scene. I don’t think any of it would work without Fraction and Zdarsky intentionally and purposefully slowing us down and forcing us to observe the drama on a near microscopic level.

Drew, what’d you think of this issue? Did it get too in the emotional weeds for you or did it sit just right? There was kind of a pause button up on the mythology, but I think it works in the context of what we should be focusing on after eight months away: Jon and Suzie.

Drew: I absolutely agree that refocusing on Jon and Suzie’s relationship was the right choice for the issue and for the characters. As the cast and scope of this series has gotten larger, Jon and Suzie have had to share both story and physical space, meaning the audience’s alone time with them was roughly tracking their alone time with each other. They’ve spent the past few issues a bit like ships passing in the night, albeit flirty ships who are still into each other. Which is to say: their little fight helps get them back on the same page, actually leaving them in a place where they’re communicating better, even if it’s a little awkward getting there. 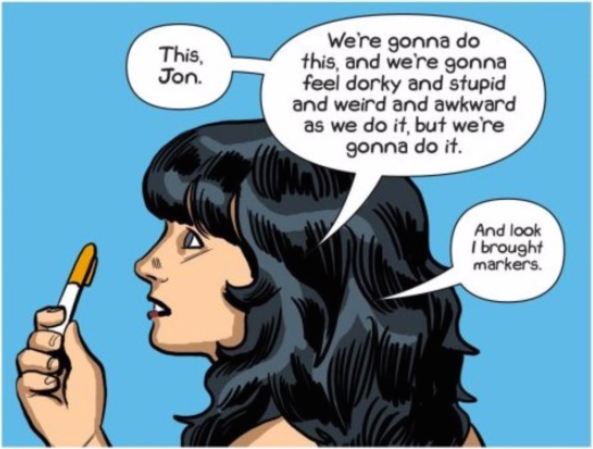 They’ve had the physical intimacy humming just fine more or less since they met (rekindled here by a sexy game of strip-goal-setting), which means the “dorky and stupid and weird and awkward” next step isn’t sex, but setting goals. I’m not 100% certain this line was meant as a double entendre — it’s a little dry for the innuendo this series usually engages in — but it certainly works as one, aside from the markers (but maybe still with the markers).

Anyway, it’s hard to deny that setting goals brought these two closer together, and that their relationship is in a healthier place. But, I worry that Suzie may be misdiagnosing what the relationship’s problems might be. She mentions Jon’s “head stuff,” and describes a compassionate, supportive attitude, but she doesn’t leave a whole lot of room for her own “head stuff.” That is, I think she has her own intimacy issues to work out: 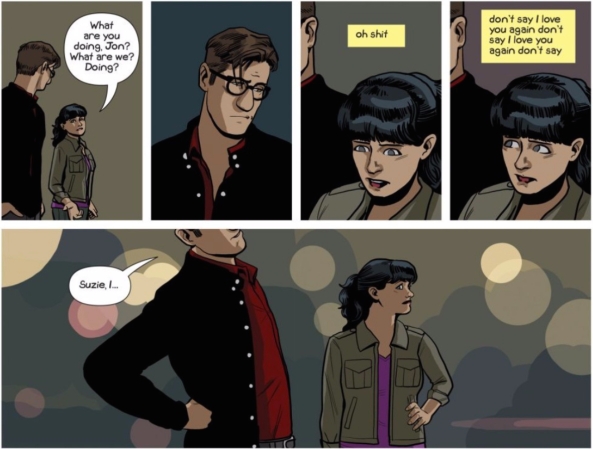 Maybe I was the only one who was surprised when Suzie didn’t say “I love you” back to Jon — I had kind of been reading “This guy. This fucking guy.” as an affirmation of something certainly love-like — but there’s clearly a block there that Suzie hasn’t fully acknowledged. Which is why I was so grateful for that recap at the start of the issue. Suzie’s narration never made a big deal about her father’s death (or, at least, she didn’t make it seem like it was something that was affecting her in her adult life), but it’s inclusion in the recap suggests that it may be more important than Suzie would ever acknowledge (or is even consciously aware of). Her father’s death may have planted some hang-ups in declaring love for fear of abandonment (or maybe jinxing the relationship), even when what she’s feeling walks and quacks like love.

It’s that kind of psychological depth that makes Fraction’s characters so believable. I remember his use of the phrase “identified patient” — the member of a dysfunctional family who manifests the dysfunctions — in Hawkeye, and being impressed at the notion that Fraction could paint one character’s psychological state as a reflection of another’s. I think something very similar is going on here. Jon’s diagnosed “head stuff” makes him the one with problems, even though part of what he’s struggling with may simply be reverberating off of Suzie’s own insecurities. Point is: these are psychologically nuanced characters, whose interactions play upon the depth and realism of those nuances.

Which brings me back to Patrick’s point about how Zdarsky’s tendency to cram tons of silent panels in between the dialogue really highlights the subtleties of what’s going on here. Or, I guess the panels don’t have to be silent to accomplish that. Looking back at that sequence of Suzie dreading Jon saying “I love you,” I can’t help but wonder how that moment felt to Jon, who obviously wouldn’t be privy to Suzie’s inner monologue, but might just as well have read it off of her face. We don’t always get to know what he’s thinking (and less so recently), but he’s likely more aware than Suzie is giving him credit for. He can appreciate those moments-between-moments as well as we can, even if he’s also been distracted by the mythology for a while.