Drew: I tend to steer a pretty wide berth around 0 issues. Unlike a first issue, which is clearly designed for newcomers (even if the character has been around for decades), 0 issues might be explicitly pitched as a prequel of sorts, offering origins or explanations for elements already at play in an ongoing series. Then again, they may be prologue for a forthcoming series — a kind of de facto first issue, perhaps tackling inessential exposition that would only bog down the real first issue. Or they might achieve that prologue effect by way of an epilogue for the previous volume, pointing to the future while tying up some loose ends from the past. Any of these varieties can be good, but usually only for longtime readers — folks already invested in the characters, their current situations, or what might happen next. In this way, Bloodshot Reborn 0 is an unfortunate introduction to the franchise, though the appeal of these characters (and this creative team) shines through, even if some of the finer points of the story are lost on newcomers.

It helps that the tension between the past and the future is an explicit concern for the characters here, illustrated most clearly as the Bloodshot Squad grapple with the idea of learning their pasts as they prepare to re-enter the civilian population.

An unknown past could bring answers, but it could also confuse the present, bringing up details that can only hurt these characters. That’s an attitude that’s remarkably familiar to anyone hoping to pick up a long-running series mid-stream. Do I need to know the past to move forward? The split decision amongst the Squad makes it difficult to glean the attitude this series has to its own past, though the fact that there’s a choice at all bodes well for newcomers.

It helps that this issue finds virtually every character in flux. I may not have a firm grasp on who the Bloodshot squad are, but having them transition into civilian life allows writer Jeff Lemire and artist Renato Guedes to show us. I mean, it helps that they wear stereotypical hats and hairstyles to tell us when and where they came from, but even when those elements are stripped away (or hilariously not, as the case may be), their actions speak volumes about what they value. 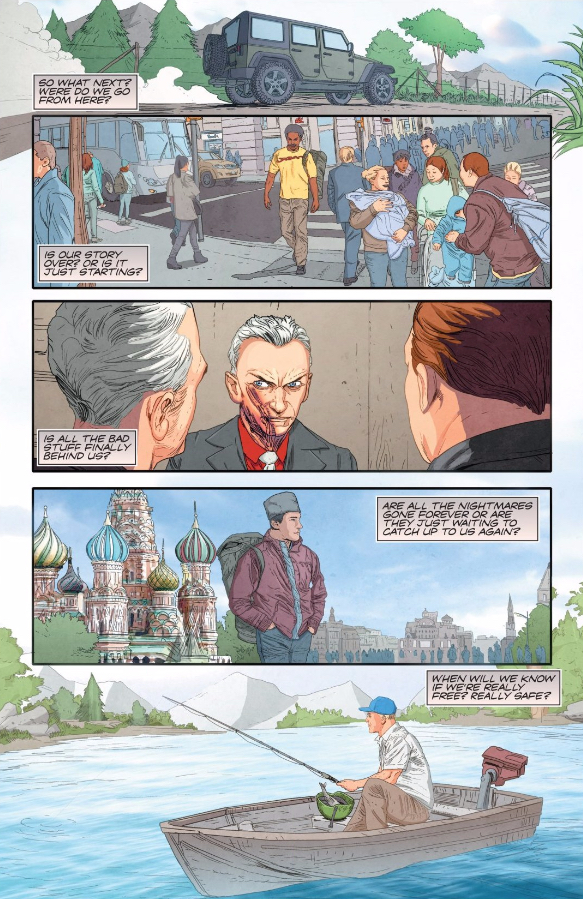 And again, everyone is in flux. I mentioned the Bloodshot Squad, but this is just as true of our villains, also pictured above, as Project Rising Spirit transitions into Project Omen. I didn’t get to see the former dismantled by the actions of our hero, but the thought that they’ve only taken a strategic retreat to return stronger is still unsettling. Everyone is looking towards a better tomorrow, even the ones whose better tomorrow necessarily means destroying the tomorrows of the rest of the world.

But obviously, the big story here is Magic’s pregnancy. Having a baby is a classic “everything is about to change” story beat, but the fact that the father is a nanobot-augmented “monster” adds an extra level of uncertainty. Lemire leans into that uncertainty, allowing both Magic and Ray to admit they have no idea what they’re doing, but acknowledging that they find strength in one another. It’s a resolution of sorts, but decidedly not a conclusion, leaving the outlook positive, even as the specifics are entirely uncertain.

All of which is to say, this issue really worked for me, even as I recognize that I don’t have all of the context to understand it. It’s a bit like finding a ball from an out-of-the-park home run — I can appreciate the gist of the accomplishment, but can only imagine the specifics. I’m pretty sure Lemire and Guedes knocked this one out of the park, but that’s relying more on context than real familiarity with these characters.

Ryan, I think you’re as new to Bloodshot as I am, so I’m curious how this issue landed for you. Were you as won over by the hints of resolutions and new beginnings as I was, or did the feeling of being out of the loop prove too distracting to really enjoy? Also, as perfect a name as “Bloodhound” is for Bloodshot’s dog, were you distracted at all by the fact that he’s not, you know, a bloodhound?

Ryan D: I confess, Drew, that the misnomer did bother me a bit. It bothered me in the same way in which, let’s say Ray toted around what looked very much like a white purse accentuated with red Louis-Vuiton accents, but he called it his “bloodbag”, would bother me. That being said, I really like the visual which the albino pooch provides.

My main curiosity at this point, seeing as I am also new to the characters here, revolves around the lead, Ray. I find it odd that I found myself drawn more to the Squad who are, admittedly, quick sketches of tried and true stock soldier templates, seen countless times in literature and film. Perhaps these rougher sketches of characters acted as a fast hand-hold for me to grip while entering a new world, but I found myself at the end of the issue more eager to see former killing machines, all stolen from different decades, try to reacclimate to the present day. Sure, Jason Bourne and Capt. America have been playing with that shtick for years now, but in these particular cases and after such a widely-broadcast event such as the recent release of nanobots on the populace of a major American city, one can only wonder how the three in the Squad will get on.

Ray stands as a counter-point, already holding a firm grasp on his own identity, embroiled in a relationship (albeit one filled with some recent uncertainty in the form of unexpected progeny), and owning a dog — generally seeming to have it all figured out except for the whole “using protection during sex unless a couple is planning on a family” thing. I, personally, got a whiff of gravitas surrounding Ray which I, as a first-time reader, did not feel like the character in the issue had earned, though I’m sure that long-time fans might disagree with me.

The big success of Bloodshot Reborn 0 rests especially upon the capable shoulders of artist Guedes, whose scratchy lineation and characters’ proportions remind me a bit of favorite Lenil Yu. I feel comfortable in the fact that I see Guedes is comfortable giving us this story visually. I particularly appreciate how Guedes keeps the “camera” moving so much, giving the reader a solid mix of high and low angle shots which kept me engaged and looking for key details.

It’s very confident storytelling; Lemire, yet again, shows one of his finest skills as a writer: choosing a complimentary artistic team to bring his visions to life. If this is how well Guedes draws exposition and conversation, I’m very keen to see him handle action, love scenes, and more heightened conflict.

One other thing which I hope receives reinforcement in the series to come would be the character of Magic and how she will continue to mold the Bloodshot mythos. With my lack of pre-existing knowledge regarding her or the nature of her relationship with Ray beyond the superficial (i.e. she was his “rebound” after Ray’s last girlfriend became a killing machine as well, and that Magic and Ray both share an aversion to prophylactics), Magic came across more as a plot device than a fully-realized person who finds herself playing a larger role in the titular character’s narrative than she may have dreamed.

The Valiant imprint’s current resurgence makes for a very fertile playground, one in which the Bloodshot series could thrive. Can you imagine the Bloodshot Squad running into the errant Divinity? Who wouldn’t want to see that? It will be interesting to see how Lemire and Guedes handle Bloodshot Reborn 1, seeing as they handled a lot of backstory here, and considering issue zeroes can be, as Drew was saying, more like bonus content than essential. I hope that Lemire can find a riveting way to tie Project Omen deeper into the main characters, so that we’re not just rehashing the very current “Don’t become what they made you” trope we just saw handled in Logan, again. If the creative team can hit the ground running and keep distilling whatever it is about Bloodshot which makes the property unique, then I think they have a very fun, frenetic little monster on their hands.