Today, Patrick and Ryan M are discussing Eleanor and the Egret 1, originally released April 5, 2017. As always, this article containers SPOILERS!

Patrick: Comic book fans have a weird relationships with the medium. For as much time as we spend staring at visually stunning works of art, we tend not to place too much value on what the art itself means to us. Oh sure, we can complain that some something is too cartoony or too pin-up or too grim-dark, and we can praise action sequences and cool-looking costumes, but all comic art is necessarily tied to something beyond the art itself. There’s a story, a message, a political point of view, a joke — the art straining to express something other than itself. Eleanor and the Egret is poised to flip those priorities, insisting on both the value and the meaning of the art by making it both subject and medium. The first issue is delightfully soothing, and nearly impossible to analyze against psychological and narrative norms. It’s so singularly beautiful, I wish I could eat it.

The story follows both the criminal and the detective involved in the theft of a painting from the Musée de Couluers Etonnantes in Paris. Writer John Layman has set up a story that allows artist Sam Kieth a remarkably reverent canvas for all kinds of art. Kieth makes references to famous paintings, occasionally cheekily asking the audience if they get it. But it’s less a game of spot-the-reference, and more a persistent assurance that everything on the page is worth looking at. Kieth is also careful not to disappear up his own ass, evening honoring the graffiti on the columns at the Museum entrance.

There’s also kind of an interesting anachronism in this panel — only the graffiti and the dude with the phone on the right side of the panel would suggest that this story is taking place in the 21st Century. The costumes feel like they’d be at home a full two-hundred years earlier, and the character designs are reminiscent of mid-twentieth century storytelling masters like Hergé (The Adventures of Tintin) or Antione de Saint-Exupéry (The Little Prince). This, again, is subject meeting medium, as the whole thing as a decidedly European appearance. That’s a fitting setting for a story so focused on art.

And that’s exactly what Eleanor values: art. She steals a painting by the artist Anastasia Rüe — a painting, which to the best of my knowledge is really an Kieth original — but she doesn’t do it for any of the trite art-thief-reasons. Eleanor steals the painting because she loves it. Kieth lets us know that she loves the painting by making the reader fall in love with it and Eleanor at the same time. This page just about knocked me out, it’s so wonderful: 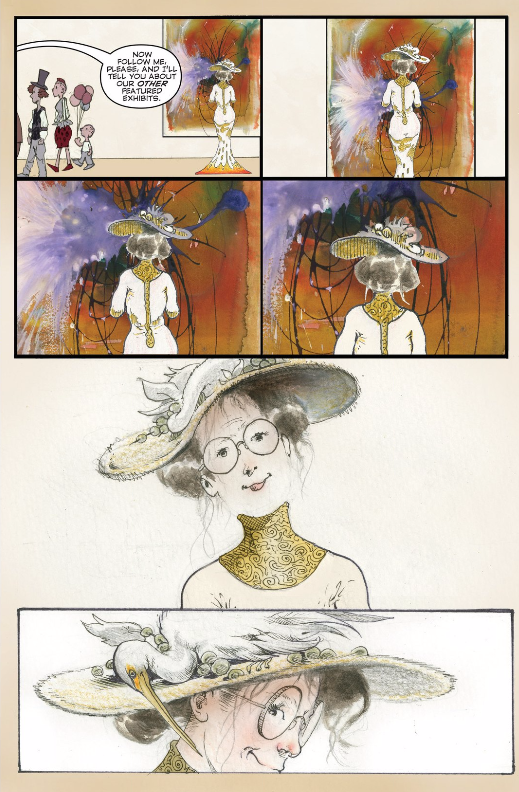 The camera starts to drift away with the rest of the tour group, but lingers and Eleanor and the painting. We zoom, in getting more close-up detail, but never without our heroine right in the middle of the thing. Then, miraculously, we get the painting’s perspective as Eleanor stares longingly. The she turns and smiles flirtatiously at it. (Swoon!)

There is a museum heist that comes along with all of this art-ogling, but even that is more an exercise in composition and perspective than any kind of plot machinations. Detective Belanger and his Chief marvel at all the security measures the thief would have had to overcome, and Belanger offers the simplest, if most fantastical explanation: “maybe they flew.” And of course, fly they did. That’s exactly the kind of magical thinking Kieth is quick to cash in on, delivering wonderful panels like this. 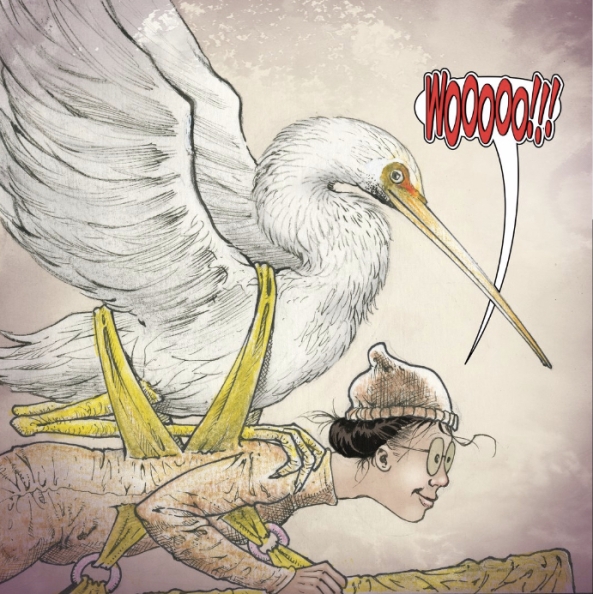 It’s like the whole thing is a Sam Kieth gallery! Of course, I’m selling colorist Rhonda Pattison short in this equation. Her graceful touch with color lets just enough of that page-quality show through to give the whole issue the appearance of a weathered storybook, watercolored with love.

After Eleanor and Belanger meet in the pet shop down the street, Layman’s chapter title asks the following question: Who is the Real Eleanor? Kieth illustrates the possible answers — bird owner, art-admirer and heist-puller-offer. It’s a cute question, but all of the answers are so charming, I kinda don’t care about the answer. Besides, the passive questions the series poses are so much more interesting. Does everyone have a spirit animal that helps them out? (Belanger has that black cat and the Chief has that rad dog.) What kind of crazy power does this egret have? (Beyond being able to talk to Eleanor.) And — my favorite question — why did the bird eat the painting?

If the answer to that question is just “because the drawing of the bird after he ate the painting is hilarious,” I’d be totally satisfied.

Ryan! I loved every panel of this thing, but I can’t say that I have too much of a handle on either of our main characters. I don’t think that bothers me, but I do notice that I would have a hard time characterizing either one of them. Who cares! I agree with the bird: this thing tasted like a million bucks!

Ryan M: I agree. This is a great first issue, introducing us to a strange world with intriguing characters and beautiful art. There is little here to critique, so I am going to focus on some of my favorite bits.

There is something both incongruous and charming about Eleanor and it starts on page one. We meet Eleanor as she runs through a swamp in a silk evening gown. The panel borders includes Art Nouveau flourishes and Eleanor looks like a Victorian Nymph. That image of Eleanor is quickly called into question on the next page as she falls on her face.

The “splat” panel may be my favorite in the issue. It’s so surprisingly comical and takes Eleanor from object of beauty to a human level. We’ve all splat-ted, right? Of course, she doesn’t fall just to make me feel better about all my own klutziness, but to bring us to the core relationship of the series. She discovers an egg. The egg lays on the nest and seems to give off soft white glow, lighting up Eleanor’s face as she gazes at it like it’s the Holy Grail. We have no context for Eleanor at this point. We don’t know anything about her or the world she lives in, but Layman and Kieth give us just enough to be intriguing. Especially as the next scene takes us from the swap to the center of Paris.

The story unfolds so deliberately with almost no exposition. We discover for ourselves that we are in a world that is both modern and in the fashion of the late nineteenth century. People seem to keep animal companions that they can communicate with perhaps telepathically. It’s not clear from the issue if Detective Belanger is hearing his cat’s thoughts or if they are just really simpatico. Either way, the meeting of Eleanor and Belanger is enhanced by the inclusion of their respective animals.

It’s not clear from this scene what Belanger knows or whether he has picked up on Eleanor’s really weak lying skills, but the silent interaction between Cheswick the cat and the Egret underscores a level of suspicion. As Belanger kisses Eleanor’s hand, Kieth focuses our eye by creating visual noise at the edges of the scene, making their eye contact the center of interest. The next set of panels reinforces this idea with mirror images of Eleanor’s fear and Belanger’s probing look. His words could be read as flirtatious or merely hiding subtext that she is one of his prime suspects.

A first issue doesn’t need to spell out its arc or give you pages of background. Rather, it needs to present a world that you want to visit and characters that you want to see again. Layman and Kieth accomplish that on every page. I don’t know who the “real Eleanor” is or why that egret ate a painting, but, in the immortal words of Patrick, “who cares!” I am in.