We try to stay up on what’s going on at Marvel, but we can’t always dig deep into every issue. The solution? Our weekly round-up of titles coming out of Marvel Comics. Today, we’re discussing Amazing Spider-Man 26, Old Man Logan, Silver Surfer 10, Unbeatable Squirrel Girl 19, and Unstoppable Wasp 4. Also, we’ll be discussing Captain America: Sam Wilson 21 and Unbelievable Gwenpool 14 on Monday and Black Panther: The Crew 1 on Wednesday, so come back for those! As always, this article contains SPOILERS.

Spencer: As we all know by now, the general thesis of Spider-Man as a character is that if he has the power to help people, then he has a responsibility to do so. The current volume of The Amazing Spider-Man has found Peter’s power expanded exponentially with the formation of Parker Industries, and as far as Peter’s concerned, that gives him the responsibility to do more for the world than he ever could as Spider-Man alone.

The problem is that running a company means that Peter is no longer just responsible for the public he’s vowed to protect as Spider-Man, but for the company bearing his name as well. This conflict has been brewing throughout this entire volume, as Peter’s ideas have at times hurt Parker Industries and caused friction with his customers and employees, but Dan Slott and Stuart Immonen start bringing it to a head in issue 26, as Peter leads his company into illegal territory by helping Silver Sable stage a coup against the sovereign country of Symkaria in order to bring down Norman Osborn and his criminal empire. This would be risky for Parker Industries even if they weren’t under public scrutiny for the Clone Conspiracy fiasco and even if Otto Octavius wasn’t trying to stage a hostile takeover right now, but the fact that they are leads to Parker Industries becoming an enemy of S.H.I.E.L.D. Yeah — good intentions or not, this is not one of Peter’s better decisions.

The danger is amplified by the fact that Peter might not be in the best mental condition right now. We discussed last month how uncharacteristically grim and hyper-focused he was being, and while he lightens up a bit this month, he’s still throwing himself head-first into traps, ignoring his Spider-Sense, in order to capture Osborn. That said, Silver Sable is even more obsessed than Peter right now, which makes me think that her role in this arc might just be as a warning of what Peter could become if he doesn’t cool his jets a bit. I’ll be keeping an eye on her.

Drew: I was struggling to come up with a snappy analogy for Logan’s time-skipping consciousness in this issue: “Wolverine in Time” pleased my inner Turtle fan, but didn’t quite capture the nature of Logan’s time travel; “Days of Wolverine’s Past” got closer on the time travel (a bit too close, given the way the movie sent Wolverine back instead of Kitty). And then it hit me — he’s Desmond Hume from the LOST episode “The Constant.” The Desmond-centric episodes are arguably the best LOST episodes, and the pinnacle must be “The Constant,” where Desmond’s consciousness is sent skipping through the past, forcing him to establish a connection to stop it from happening.

As this issue informs us, this is only part one of a four-part story, so we never get anywhere close to the emotional resolution of “The Constant,” but it establishes the mechanic of Logan’s time travel about as effectively as the first act of that episode. But it’s obviously just the first act. This issue doesn’t establish, let alone advance, any emotional stakes in Logan’s journey. Instead, we get retreads of some of the most well-worn moments in Logan’s history. The issue starts with Logan on a mission in the War of 1812, but then carries him into the tank at Weapon X before dropping him into his first comic appearance, way back in Incredible Hulk 181. 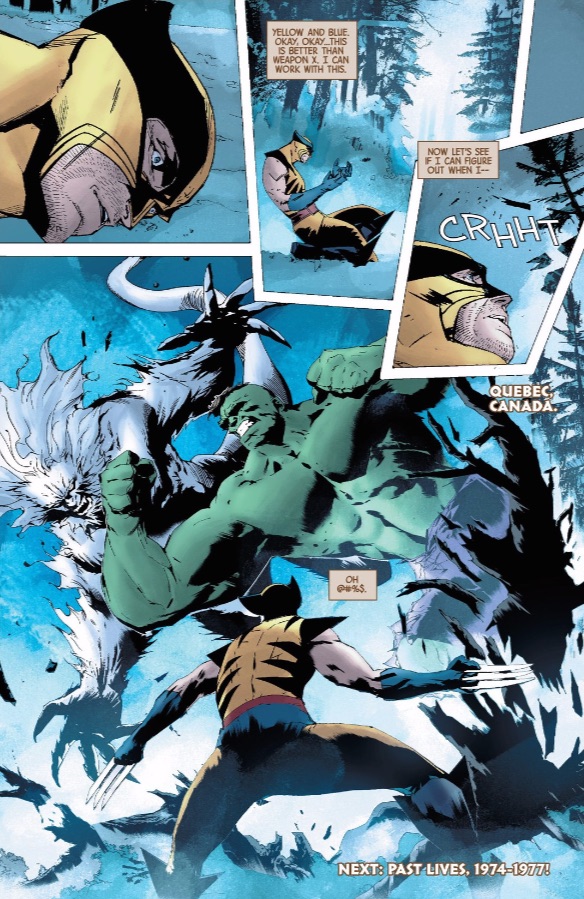 The effect is a kind of abridged history of Wolverine, hitting some familiar moments, but not really bringing anything new to them. In the present day, we learn that Asmodeus intends to sell Old Man Logan’s unconscious body to the highest bidder in a room full of criminal organizations like Hydra and AIM. Those stakes might matter if they could inform Logan’s actions, but as he’s entirely unaware of them, he just has to continue the tour of his past, playing a game of “find and touch the amulet” over and over in hopes of landing where he actually means to go. He might end up somewhere with a bit more meaning for the story next month, but this issue feels largely disposable.

Patrick: The trend in science fiction anthology series is to lean into the more horrific elements of a future gone awry. The original Twilight Zone liked to show how technological advancements enslaved humanity rather than liberating it, and that’s a tradition you can trace all the way through to Black Mirror today. Even something as bright and bubbly as Dan Slott and Michael Allred’s Silver Surfer isn’t immune to this pull to darkness — the previous issue put Dawn’s flesh body in danger of being ground up for meat to feed a holographic society! But issue 10 sets the duo back on a path to insatiable positivity, insisting on the power of love in the universe… and and also insisting that “the universe” is this particular comic book.

Norrin Radd has been summoned by Galactus! That’s page one, and if history is any indication, this is horrible news, right? The Silver has been free of Galactus for years, and regressing to the role of Herald would be the worst possible thing for him, for his relationship with Dawn, and everyone living on whatever planets Gal’ wants to eat. But Slott and Allred take this disaster and put an instantly positive spin on it: Galactus is no longer Devourer of Worlds, but The Bringer of Life. That’s a change from within the pages of Ultimates 2, so I don’t want to give the creative team too much credit for the twist, but they do play the potential horror of Norrin serving a World Eater with a straight face right up until the reveal. This establishes the issue’s relationship with good news and bad news. Instead of a Twilight Zoneian twist of something you expect to be good turning out to be awful, we see our presumed-doomed characters offered a chance to save the universe. It involves Galactus sending them each to opposite ends of the universe with one-way tickets. This is where I started SQUEALING WITH GLEE, as it becomes clear that Allred is going to use the width of a two page spread to represent “the universe,” with Galactus at the center, sending his messengers to opposite extremes.

Dawn and Norrin both find themselves so far out on the edges of the universe that the star fields of space give way to empty white of the page’s gutter. The next spread gives us two quick, separate stories, Dawn on the left and Norrin on the right, separated by a sea of empty white page. To these characters, this comic is their whole universe, and suddenly there’s no medium between, just an untraversable void. Ready for the positive twist? Of course you are! Eternity — aka, the Universe — sees the lovers stranded on his outstretched fingertips, and brings them back together. Because of love! It’s just such a beautiful celebration of positivity and love, and wrapped up in a science fiction story that only makes sense on the comic book page. In other words: it’s the platonic ideal of Slott and Allreds’ Silver Surfer.

Taylor: The old adage says that a picture is worth a thousand words, and nowhere is that more true than in Squirrel Girl 19. Doreen is in the clutches of the dastardly Melissa Morbeck, who is using mind control to make animals carry out her sinister plot. What exactly that plot is and how she plans to accomplish it is told to Doreen in great detail by Melissa. In fact, most of this dialogue heavy issue is devoted to giving Melissa the chance to tell Doreen all of her secret plans, old-school villain style.

Things don’t start off this way, though. The issue begins with a wonderful double-page spread showing the havoc that Melissa’s animals are wreaking around her house. It is a wonderfully chaotic scene and Erica Henderson takes the opportunity to really wow us.

The genius thing about this page is that there isn’t actually a ton going on in it. Rather Henderson uses a few choice panels to make it look more chaotic than it really is. In seven small panels, placed around the page, Henderson shows us all the hijinks Melissa has her animals up to, but very rarely does this action spill onto the primary panel. Instead, the only animals we get glimpse of are some birds, and owl, a giraffe, and some monkeys, none of which is looking all that dangerous. This is perfect visual story telling and a great way to convey the feeling of chaos without cluttering up the page.

Sadly, this is about the only instance where Henderson gets to control the story at all. The rest of the issue is so wordy that Henderson is relegated to drawing panels just to show that Melissa is still talking. Usually an abundance of dialogue is a good thing in a Ryan North publication, since he’s so witty. However, that trademark cleverness isn’t present here and the conversation between Melissa and Doreen is a slog to get through. Between this issue’s lack of wit and the oddly downbeat Jughead last week, I think we all need to be getting worried about North. What’s up Ryan? Everything OK?

Ryan M: This issue positions the conflict as coming between Nadia and “Mother.” While Nadia’s mission to bring the smartest girls in the world together to improve the future has found her afoul of some small-time baddies, it’s Mother that acts as primary antagonist.

When dealing with Poundcakes, Nadia wants to talk it out, to find a solution that doesn’t rely on her training in the red room. Instead, circumstances force her to take apart a woman whose humanity Nadia cannot deny. This is a victory of sorts for Mother and the Red Room. The Krav Maga lessons that Nadia imparts to the reader are not the usual fun science facts. Instead she tells us how to disable and potentially paralyze our enemies. There is a darkness to this sequence, especially in light of the previous science talks. Rather than inspire a reader’s desire to experiment or at least read some cool Wikipedia articles on little known phenomena, Nadia is showing us her red room training. She doesn’t mention Mother yet, but in her drive home she expresses regret that her alternative methods didn’t work.

Mother gets her first explicit mention after Nadia’s meeting with Mr. Modok (haha) and we see that the legacy of the red room is more than assassin training. The threat of Mother’s reach looms large as Nadia considers testifying about the red room in exchange for amnesty. While Nadia nominally has her freedom, there is an unease when considering the potential cost. The issue ends with Mother’s most direct act against Nadia. The bomb on Ying’s scalp puts Nadia in direct conflict with Mother and sets up a villain who will not be as easy to defeat as Poundcakes. Though, likely, the costume will not be nearly as awesome. She is serving some Lucha Libra-Lakers-lightning realness!