How many Batman books is too many Batman books? Depending on who you ask there ain’t no such thing! We try to stay up on what’s going on at DC, but we can’t always dig deep into every issue. The solution? Our weekly round-up of titles coming out of DC Comics. Today, we’re discussing Batgirl 10, The Flash 21, and Hal Jordan and the Green Lantern Corps 19. Also, we will be discussing Wonder Woman 21 on Friday and Batman and the Shadow 1 on Monday. As always, this article contains SPOILERS.

Spencer: Ethan Cobblepot is barely seen in Batgirl 10 — other than a brief shot of him spying on Barbara and Dick, he doesn’t actually appear until the final pages of the issue — despite being behind just about everything that happens throughout. This is a smart choice on the behalf of Hope Larson and Chris Wildgoose, as what’s most dangerous about Ethan is his ability to meddle and coordinate tragedy from afar, using only the information and access citizens willingly grant him through his apps.

Regardless, his actions are major breaches of privacy and morality. Ethan uses his apps to data-mine information about his users, using their secrets against them if it suits his needs, uses facial recognition and AR apps (such as what appears to be a puppy-version of Pokemon Go) to survey and spy on the city, overrides self-driving cars and uses them as his own personal hit-men. It’s every luddite’s worst nightmare come to life, but I appreciate that Larson and Wildgoose generally lay the blame on Ethan, not the apps’ users. It’s absolutely essential for app users to consider the ethics behind any app they download, and to use their head when it comes to what permissions they allow (the recent tussle between Uber and Apple being only the latest real-life reminder why), but ultimately, Ethan/developers are the ones to blame for taking advantage of people.

Interestingly enough, despite his brilliance as a hacker and strategist, Ethan ends up making a predictable villain because of his clear, obvious motives. 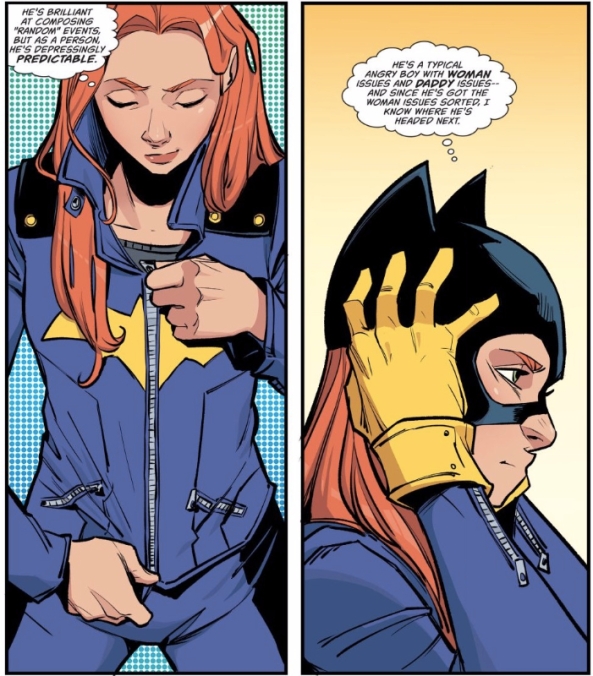 Ethan is ultimately just a variant of the “nice guy” that thinks women owe him affection — the second he faces any kind of rejection (even something as simple as Babs leaving his party without saying bye) he throws a fit and his true colors show. He can certainly be charming enough (perhaps unreasonably so — the amount of time Barbara spent interested in him romantically despite his being her #1 suspect strains credibility a bit), but his insecurities as both a man and a son (and apparently as the heir to a criminal mastermind) drive him to take desperate, illegal measures to prove his worth. For all his brilliance, those insecurities and that ego which will likely bring about his downfall in the end.

Patrick: “The Button” has — so far — largely been about subverting the audiences expectations about what this thing even is. From the abstract, it seems like it’d be easy to call the shots here, right? “DC crosses over with Watchmen, ruins both.” I am being glib, of course, but this is sort of the latent fear any reader brings to this thing. But as Batman 21 illustrated, we may not have this story accurately pegged. Not only isn’t it a “crossover” — formal elements are borrowed rather than thematic or narrative — but it’s not even crossing over “with Watchmen” so much as it is “with Flashpoint.” The Flash 21 is also still aggressively, assertively an issue of The Flash, excited to explore new territory while staying firmly rooted in both the empathy and off-the-wall sci-fi wackiness the series is known for.

One of the way the series asserts itself is in the title splash page, which borrows panels from the previous issue’s Reverse Flash fight without borrowing the layout. In Batman 21, all of these drawings were arranged in a fastidious nine-panel grid, but artist Howard Porter takes that checkerboard, breaks it up, and tosses it across the page. It’s almost an acknowledgement that that was cool, but not was this issue is. Porter and writer Joshua Williamson are also much more focused on character with this issue, leaning on the vulnerability that both Bruce and Barry share from losing their parents at a young age. This story is about their parents, and the universe-shattering consequences of these heroes trying to reconcile themselves with their loss. Porter and Williams state this theme early, patiently letting the moment land.

This vulnerability is something we keep coming back too. Bruce is beaten and laying in bed — not a condition we’re used to seeing him in — and Porter gives us a clear overhead shot of the bed. Bruce’s bandaged body is on display, more or less exposing him completely. This is both of these characters at their most vulnerable, and it’s great to see Barry responding with his trademark sensitive grace. This little bit of knowing narration got to me:

“…but whenever I talked forensics… I could see it in their eyes that I might as well have been speaking another language. Except Bruce. We could talk about evidence for hours. Even now, after almost being killed by Thawne, he still wants to talk shop.”

Barry sees the threads that connect them, and identifies forensics as something they both want to talk about. He’s a sweetheart, that’s my point.

I’m curious if other readers are antsy to get to the Watchmen-y stuff, or if y’all are enjoying the more relaxed pacing. It feels like there are so many opportunities to slip in references — either in the Watchtowers “lost and found” or while treadmilling through the multiverse — but Porter and Williamson are remarkably patient and withhold all of those bread crumbs. At this point, I couldn’t possibly anticipate what’s coming next, but I have faith in the storytellers to provide.

Michael: Hal Jordan and The Green Lantern Corps 19 is one of the few “team books” that actually manages to give substantial focus to several members of its cast. Robert Venditti splits the spotlight evenly among Hal Jordan, John Stewart, Kyle Rayner and even our new favorite Sinestro Corps member Space Ape. Each character gets their due in this issue as we see where their personal priorities are at the moment.

The Lanterns are dealing with two separate time travelers: Rip Hunter and Sarko. Sarko warns Space Ape — whose real name is Prince Lorix — and Gorin-Sunn of a future where The Sinestro Corps abandon their yellow light and join with the Green Lantern Corps. It’s likely that Sarko is playing them to his own ends, but we can’t be sure because good guy time traveler Rip Hunter isn’t as open with the Corps with his motivations. 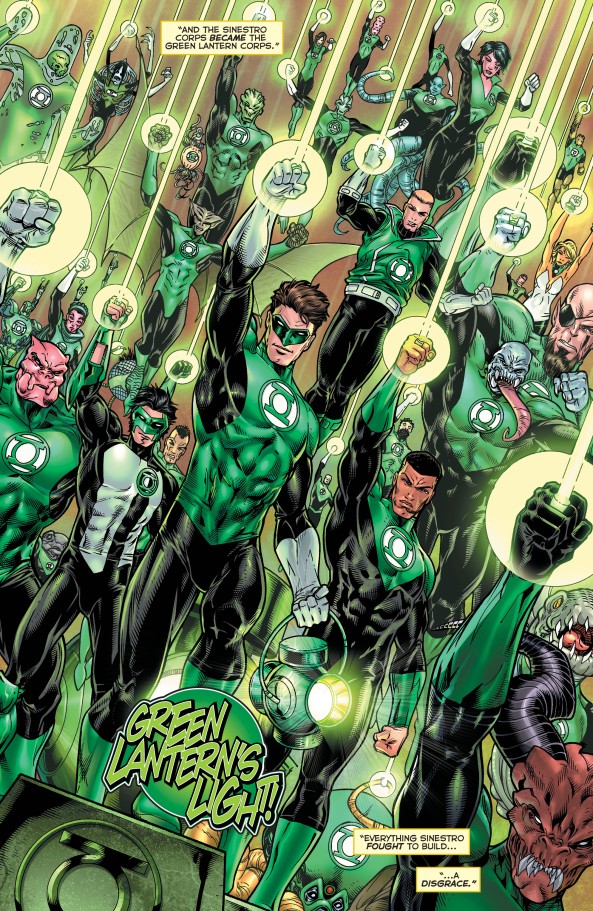 Rip brings up a favorite Green Lantern Corps argument of mine: whether the Corps is a police force or an army. John is kind of touchy on the assertion that they’re an army; which is odd because, he was actually in the military. I also enjoyed watching Kyler strike out at asking his ex-girlfriend Soranik Natu out on a date.

My only complaint with this storyline is how cagey Hal is being. He clearly knows something about Space Sector 563 and possibly Sarko’s prism beasts, but Venditti is making us wait at least another issue before he spills the beans.