Don’t tell me the moon is shining, show me the glint of light on broken glass.

Drew: In general, audiences are more consciously concerned with what happens in a story than how the story is told. That is, if you ask someone to describe their favorite movie or book, you’re more likely to get a plot summary than a thoughtful description of style. That’s not to say style doesn’t contribute to their appreciation of the work, just that it does so in ways that they may not be actively aware of. As someone who values considered analysis of art, this phenomenon is nothing short of tragic, which is why I so value narratives that aim to utterly thwart any emphasis on plotting. That’s exactly what Jason Arron and Russell Dauterman give us in The Mighty Thor 18, using every opportunity to spoil the would-be reveal of its villain.

Er, “villain” might be the wrong word for the Phoenix, which acts more as a force of nature than a sentient being, but that’s totally fine, since this issue treats it more like an idea than a physical entity. That starts from the very first scene, which even undermines its own reveal of the yet-unseen Phoenix, forcing Quentin Quire to double back to even catch that it was mentioned.

Indeed, the very fact that we pick up the story with Quentin, idly sitting under a palm tree, works to undermine the tension established at the end of the previous issue. That’s an opening that’s sure to frustrate anyone picking up the issue desperate to find out what happens next, but is pure catnip to me. Forget what happens next — let’s look at how much attitude Dauterman is able to imbue Quentin with!

No, seriously, look at the attitude here: 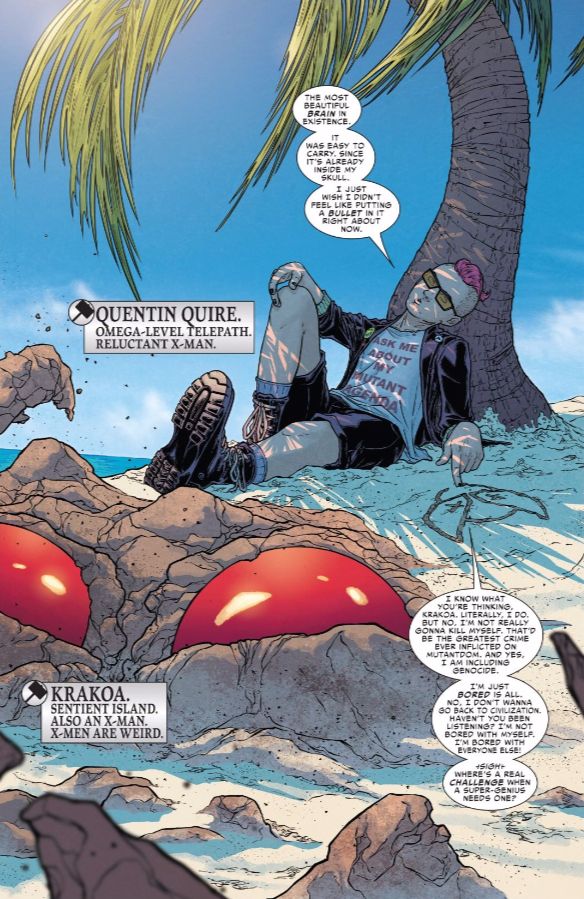 I can’t imagine anything more Quentin Quire-y than absentmindedly doodling a dead wolverine while wearing an “ask me about my mutant agenda” t-shirt. He’s riffing on recent Marvel continuity and publications in a way that only a character created by Grant Morrison can. Heck, even the chyrons get a little meta, commenting on how weird it is that Krakoa is an X-Man.

Most importantly to me, this sequence is utterly gorgeous. It may not be completely satisfying on a plot level to give us this information before we see the Phoenix, but it’s satisfying in basically every other way that matters. Honestly, if you told me this scene was just put here to give Dauterman and colorist Matthew Wilson a break from all the space operatics, I’d take it. Look at those shadows! Look at Quentin’s insufferable expression! Look at Krakoa worrying about his friend! Who needs plotting when the individual images are this compelling?

Undermining the reveal of the Phoenix on this kind of macro level feels a bit less subversive in the era of flash-forward cold-opens, but Aaron and Dauterman do it again when we finally see the Phoenix, introducing it as the LAST panel of a double-page spread.

Structurally, that completely undermines whatever surprise this reveal could have garnered. We see the Phoenix the second we turn the page — those three panels that then build up to it are only building up to what we’ve already seen. But of course, we already knew it, anyway. In introducing the idea of the Phoenix at the start of the issue, Aaron and Dauterman completely free themselves of having to surprise us here. Its arrival can’t shock us, so it should at least be pretty. And it totally is — this thing almost hurts to look at, Wilson’s lighting effects are so dazzling.

In this way, the most satisfying moments of this issue aren’t narrative twists, but in seeing how perfectly the things we expect are deployed. This comes to a head towards the end of the issue, when the flashback finally catches up to the cold-open, as Kid Gladiator coolly suggests that he “knows a guy” who can help with the Phoenix. It’s a suggestion we know is coming — we already saw Kid Gladiator recruiting Quentin — but it’s delivered with enough confidence to give it an entirely new life.

As a whole, this issue serves as a miniature rebuke of the kind of plot-first readings we tend to associate with comics. Indeed, Aaron can’t help but get in one more kick on his way out the door, handwaving away the wonky time-travel shenanigans that tend to permeate X-Men stories. 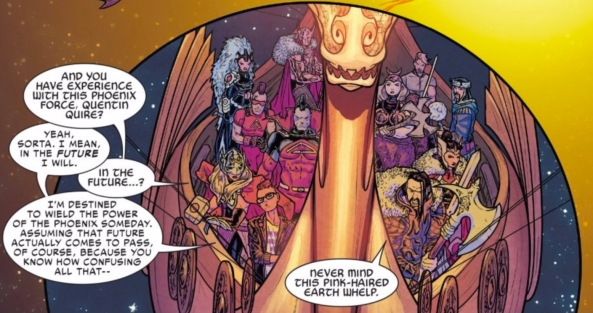 This isn’t going to be that kind of story. The Phoenix is here. Quentin Quire is here. Any other plotting is just details really, and could only serve to distract from the real fun of this issue.

Taylor, I can’t wait to hear your thoughts on the anti-plotting here. Aaron obviously does value plotting, weaving a kind of master narrative across his several years (and series) with Thor, so I’m curious if you felt cheated by this issue at all (I can certainly see how some fans might). This certainly traded up on the Shi’ar gods without really resolving their story — were you happy to move on, or did you want more closure there?

Taylor: At this point the Shi’ar are so damn annoying that I’m ready to let them go without much fanfare. This certainly is another instance of Aaron subverting typical plot structure. Normally, we’d see one villain vanquished before another emerges, but that doesn’t happen to here. That isn’t to say there isn’t closure to the story, though. The Shi’ar are badly beaten by Thor and her allies and afterward are told they lost their contest with Thor as well. So even though they aren’t exactly defeated, they take enough hits to satisfy me.

These hits come come from a number of people in a number of ways. They get punched in the face, arrowed, and socked in the gut by Mjolnir. The message sent by these actions is clear — the Shi’ar have met their match. They might individually overpower Thor, but as Shadrak points out, they can’t command the loyalty she does. Thor’s army could easily take these two down any day, so any threat they once posed is now neutralized.

Drew, you asked if I felt cheated by this issue and its lack of reveal. The answer is no, and the reason why is that it’s just such an entertaining issue. The cold open focused on Quentin is a delight if for no other reason than Quentin is that rare type of character I love despite — or perhaps because of — his dickishness. But he’s not the only thing that makes this opening scene fun. Despite not having any lines, Krakoa brings some silent comic relief that adds so much to this scene.

Krakoa, it would seem, is a shy island. In a way, that is confusingly cute for a landmass, he peeks his head up to take a glimpse at Quintin’s visitors only to burrow beneath the surface when they try to look at him. The portrayal of this, as seen above, lends a subtle humor to this tropical scene that is pleasing in all the right ways. For my money, it’s Warbird’s glance over the shoulder that makes in all the funnier. It draws attention to Krakoa’s actions without distracting from the dialogue that is most important to the scene.

Now comes the obligatory part of the write-up where I feel compelled to compliment Dauterman’s artwork. Every time I go into a Thor write-up, I wonder if this month will be month that I don’t have anything new to say about the art, but each month Dauterman always leaves me floored with his innovative and fun work. As always, it’s hard to choose a favorite page (much less panel) but the cut to “hours earlier” after the opening with Quentin is one of the highlights.

I suppose there aren’t any new techniques being used by Dauterman here, but it so effectively combines all of the techniques he has been perfecting over his run on Mighty Thor. What stands out foremost are the geometric and angled panels on the lower half of the page. Dauterman has always pushed the limits of what constitutes an appropriate shape for a panel and it always pay off. As we see here, the irregularly shaped panels help to add a dynamism to a splashy action page.

Dauterman also uses his new favorite technique of focusing here; arrows and characters close to the camera are blurred as we focus on the action in background. These out-of-focus objects serve to give the scene an added layer of depth that most artists aren’t able to achieve. Lastly, there are Dauterman’s clean lines and detail, which add a sense of reality to all of this crazy action. All of these techniques taken together make for a page that is positively unique, outrageous, and so much goddamn fun. That everything going on here is so easy to understand is truly a testament to Dauterman’s skill. Simply put: I’m not sure any other artist could pull off this page.

Dauterman’s willingness to push the envelope is representative of this series as a whole. Both he and Aaron are willing to take chances in Mighty Thor, and it seems like they always pay off. While the plot might sound familiar — heroes saving the world from destruction — the way it is shown and told to us is truly imaginative and entertaining. For a Thor comic, is there any higher praise?