Drew: Whether it was identifying the types of places our predators preferred to hunt or what kinds of mushrooms made us sick, pattern recognition was essential to the survival of early humans. As with any tool, though, our reliance on pattern recognition distorts our view of the world, leading us to find patterns where none exist — as they say, if all you have is a hammer, everything looks like a nail. That quality can be manipulated, on the one hand by those who seek to benefit from our gullibility, and on the other by artists who strive to highlight the beauty in the chaos. I found myself thinking about both groups as I read The Black Monday Murders 5, an issue full of intricately patterned beauty and intricately patterned lies.

I’m most interested in the secret history of Thomas Dane, a CIA and IMF operative turned Daniel Rothschild’s hand-picked head of security. His evasive answers when questioned by Detective Dumas a few issues ago intrigued me, but the more time we spend with him, the clearer it is how deep he was in the game. But first, a brief history of Dane’s relationship to money, death, and power:

Never mind the copy there — the image itself is the perfect distillation of the themes of this series and tells us everything we need to know about what’s going on. A white government operative convenes with a group of paramilitary leaders in the jungles of a banana republic, handing them a briefcase full of money and the picture of their president with a red circle around his head. We get a swift confirmation that this plan went off as expected, but artist Tomm Coker gives us everything we need in a few choice images.

When we pair these sequences with the epistolary texts writer Jonathan Hickman provides, detailing the geopolitical, economic, and personal forces that have influenced Dane’s life, and we get a very full picture of a man wholly disenfranchised with the powers that be. We don’t get any hint of how he reacted to learning that “the powers that be” look a great deal different than he might have imagined, but that’s because it largely doesn’t matter — he made his choice, and he’s ready to die for it.

But first, he needs to be vetted by Abby. As ever, I’m tickled with her entrances from the shadows, and Coker really drives that home as she arrives at Dane’s apartment.

Maybe this is a silly detail to love so much, but Coker handles it in such a way that you can’t tell if she’s just emerging from the shadows or if she’s, like, emerging from the shadows. It’s a restrained way of handling a decidedly magical character, hinting at but never explicitly showing her powers, adding ballast to what could otherwise be a kind of cheesy entrance. But really, any excuse for Coker to use those heavy shadows is good enough for me.

Anyway, I brought that scene up to lock down one more detail we know about Dane — and importantly, one more detail Abby and Ria know about him: he loved Daniel. He is absolutely loyal to him for precisely the reasons that Daniel was disloyal to the board, which quickly endears him to Ria. Their partnership gives this new arc some exciting momentum, establishing exactly who is on whose side.

Of course, Dane may have more to him than even Ria knows. Viktor gives Dane explicit instructions to kill himself — instructions he seems at least temporarily unable to disobey.

That he’s able to brush this off when Ria calls is fascinating, but I mostly just want to talk about the stunning symmetry of this sequence. Coker eschews the trite vertical or horizontal lines of symmetry, instead opting for diagonals that link the red panels of Dane’s face with the blue ones of the inside of his gun cabinet. We get an interesting reverse of this sequence on the next page, building a kind of wheels-within-wheels symmetry that I’m not yet sure I understand the meaning of.

Ryan! I think I’m building towards a point about symmetry and patterns, but I’m not sure I have enough yet to draw the grand conclusions I’m reaching towards. Do you think I’m on to something, or am I reading too much into Coker’s formal flourishes?

Ryan D: Drew, you aren’t the only one searching for the larger patterns and schemes in play throughout this issue and entire series. Detective Dumas, for example, finally receives the first real inkling of the theory behind the dark forces at work in the murder of Daniel Rothscild. The professor begins to pull back the curtains on the arcane elements in the diner scene, and I confess to being very impressed with how the creative team pulled this bit off. Drew already mentioned how impressed he’s been with Coker’s artwork, but I think this scene really illustrated Coker’s talents:

Check that out. The conversation between the two characters takes place over six pages — including two for the cut away to the “Rich Hill” story and its tie-in with Dane (pictured above in Drew’s musings), and provides the challenge of making that much dialogue interesting and engaging. Coker displays an uncanny knack to take Hickman’s dense and erudite text and really giving the conversation a visual rhythm for the audience to enjoy. I love, for example, that he illustrates the more tentative moments on the first page with long, horizontal panels, helping to establish the distance between the two characters and that beat’s slightly slower pace before visually bringing the characters closer together on the next page utilizing slimmer, vertical panels and moving to the more traditional shot/reverse shot pattern (one which the audience can quickly recognize as a more bantery pace from years of training via watching films). Add in little details like how many panels go by before we get to see the pupils of the professor in an eye-level shot as he gets down to the meat and potatoes of the conversation, or how Coker gives us a single on Dumas from top-down in a high-angle shot right when the detective admits that he’s out of his depth, making the character seem more vulnerable and reduced.

Michael Garland’s coloring in the scene also plays so well, with the warmer reds and cream colors of the diner acting as lovely counterpoints for the green of South American jungles, or the perpetual greys and shadowy blacks of the office scenes. Also, after a quick page of epistolary information, Hickman and Corker give us that beautiful three-page silent scene featuring Abby casing Dane’s apartment — a happy and earned respite from the verbiage of the previous pages.

The same applies for the board room scene, I’m glad to say. The stakes felt extremely high for me in such a volatile room once we see that Viktor Eresko, the murderer of Ria’s brother, sits at the table. Ask yourself if you can see the tension leaking off the page here: 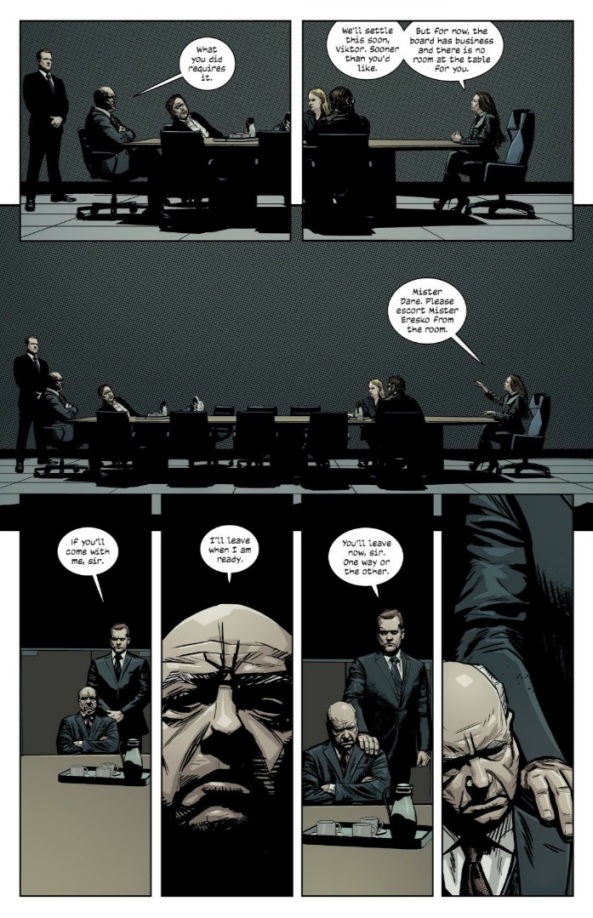 Just like in the scene of Dane’s almost-suicide, Coker sets the readers’ eyes up for a wonderful journey which tells just as much of a story as the words on the page. The first two panels at the top seem purposefully separate so that we intuit the two camps in the room: Marko and Viktor on one side (with Dane standing there, guardedly, forshadowing his function soon) opposing Ria, alone on an island of an office chair. Her next speech balloon pulls our eyes down before the uncomfortably long, awkward journey across the board room table to Viktor. Then we go down to the physical confrontation in the bottom four panels which carries its own cadence, and the camera pulls in tighter to ratchet up the tension — appropriate because the conflict here is one being played through the disregard of personal physical boundaries.

There’s something brilliant about how Coker draws Viktor Eresko here, full of disdain and danger, but contained and bottled within a business suit. It can be a rare thing for a character in a comic to be portrayed as an actual human body, in space and time, and under the effects of gravity, but Corker never misses with Viktor. I think the man illustrates body language, in general, with extreme aplomb. For example:

Dane’s gestural score here reeks of professionalism, like he’s in the midst of a military brief, whereas Ria’s comes off as clipped and controlled, moving much less than Dane — cementing the fact that she holds rank in this scene. It’s really effective stuff, and I couldn’t be happier that a writer like Hickman has a collaborator like Coker.

As far as the patterns and the wheels within wheels, I confess that at this point in the story — only five (very dense) issues in — it may be too early to start putting the puzzle together. From following Hickman as a writer since 2007, though, I have faith that all of this will add up to something rich and complex, and Coker will make it look like a million bucks. I’m really taken in by The Black Monday Murders; I can’t think of another book like it. So for now, Drew, enjoy your pareidolia; I’ll settle for finding out what happened to Wynn Ackermann.