Taylor: Here are Retcon-Punch, we read a lot of comics. This is great in so many ways, but primarily because at no other time in history has their been so many quality options for monthly reads. However, the deluge of great comics can take its toll. Given too much of something good, even great comics, a person quickly becomes numb to their pleasures. Reading so many wonderful series means that it becomes easy, on occasion, to overlook just how amazing and unique some issues really are. It’s for this reason that Doctor Strange 21 stands out to me. Not only is it an excellent issue on its own, but it reminds me why comics are some of the most innovative mediums going today.

Issue 21 (which has been released before issue 20. go figure.) is part a tie-in to the recent Secret Wars event. As such, the stakes are high from the very beginning. New York city is enveloped inside a Darkforce bubble and it is up to Doctor Strange and some fellow heroes to fight their way out and free the city from the grasp of Mordo and his dark magic.

For Steven, this means beginning his adventure inside the belly of a giant, magical beast controlled by Mordo. In typical Doctor Strange fashion, Stephen is in over his head in more ways the one. His first order of business is to escape the digestive tract of this animal and in so doing has to battle the creature’s tongue as a sort of final obstacle.

Niko Henrichon draws this scene wonderfully with a full page spread that offers a masterclass in panel layout. The primary panel that first grabs our attention in the scene focuses on the tongue Stephen will have to overcome if he wishes to free himself from the belly of the beast. The tongue acts as Stephen’s nemesis here and by focusing our attention on it, Henrichon gives us a taste of its importance to the scene. Henrichon uses the curl of the tongue and some fluid panel edges to keep it clear where we should be looking. These sloping lines also remind us that everything here is taking place in an organic, curvaceous body, so much the better to accentuate the absurdity of Stephen’s plight. Unique artwork and panel layouts such as these is something only a comic can pull off, and it reminds me just how much fun reading a comic can be.

Henrichon and writer Dennis Hopeless continue this trend of embracing the unique storytelling capabilities of comics later in the issue, as well. Just as Stephen is about to be re-eaten by this same monster, Wilson Fisk, aka Kingpin, drives his limo into the monster’s head, killing it and saving Strange. The lead up to this event builds tension while also doing something only a comic can.

As Stephen and his comrades are about to be beasty bites, as is seen in two large panels which attract most of our attention, there are three overlayed panels showing the Kingpin’s limo driving furiously.  The tension of this scene lies not in knowing if the limo will save Stephen (because obviously it will somehow), but in just how it will be done. On earlier pages, we were teased with its appearance as well, and with each successive panel we see the car, the more we can only wonder how it will kill this monster. What makes this page so much fun to read, however, isn’t the tension, but once again the way in which the panels are laid out. Here, a reader can choose to read the panels showing Stephen’s party all at once first. Or a reader could choose to read all the limo panels. A third option is to read the panels all linearly. All three options are fine, but it’s that choice that makes this page fun and once again something only achievable in comics.

Speaking of things only comics can do, I love the freedom that writers have to debase their heroes in ways that would never be seen on the big screen. It’s well known that Strange has been down on his luck since the Last Days of Magic, but he stoops to some new lows in this issue. Most notably, he has to use to trash to fight the forces of evil.

There’s something infinitely entertaining about Stephen lighting some old Chinese food on fire and calling it a “fine witches brew.” While Marvel has done an admirable job of working levity into its movies (unlike some other comic publishers), it’s hard to envision a world where they make a movie about Doctor Strange: Trash Wizard. However, comics writers enjoy much more leeway and the result is some truly inventive and fun story telling where an un-lucky rabbit’s food becomes a prime weapon in the fight against evil.

Drew, at you can probably tell, I enjoyed this issue quite a bit. It’s unique not only its content but also in the way it delivers its story. Did you like it as much as I did? Did you get a good chuckle out of Daredevil’s misjudgment of magic in the same way I did? And if you were tasked with making a cauldron of trash to combat the forces of evil, what would you throw into it?

Drew: Gosh, looking for items vaguely associated with superstition on Manhattan? I guess I’d scour bodegas and pizza-by-the-slice places for framed first dollars made — those should have the same totemic power (and combination of good and bad luck) that Doctor Strange was working with, and would be in relative abundance.

The Daredevil cameo was definitely fun, but I think I was most fond of seeing Hopeless write Jessica Drew and Ben Urich again. It’s only been a couple of months since Spider-Woman ended, but just knowing that these two are still up to goofy adventures together — even in the depths of Darkforce-shrouded New York — warms my heart. As far as I’m concerned, Hopeless is the writer of their bicker-y banter, so I couldn’t be happier that he took the opportunity to catch up with them here.

Which I suppose brings me to their inadvertent destruction of Strange’s witches’ brew: 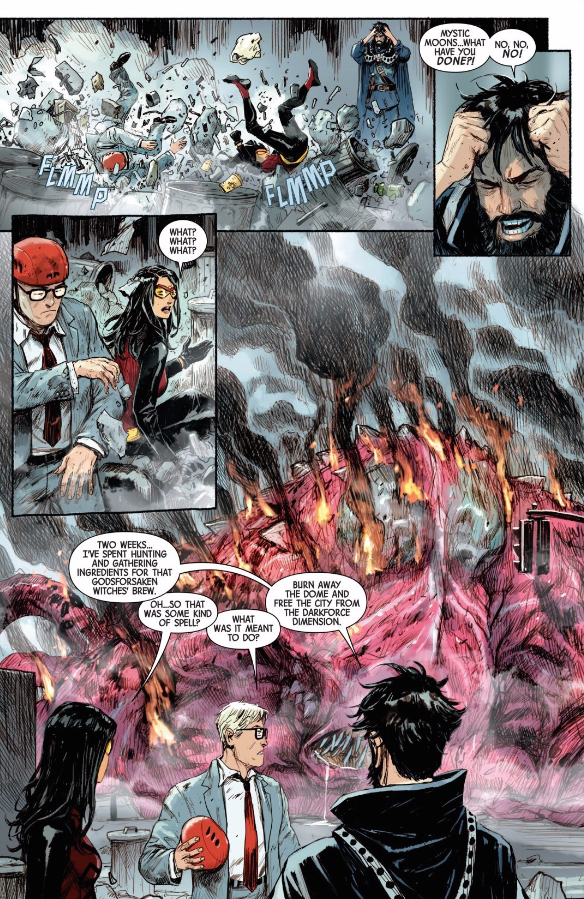 Taylor already mentioned Henrichon’s intuitive sense of flow, but I want to echo that praise just to point out that it works even in these more boilerplate layouts. The motion of Jessica and Ben smashing into that first panel carries us into that closeup of Strange in panel two, but his gaze turns us back to the left for panel three, which then directs us down for that big, full-bleed image that takes up most of the page. It establishes the geography of these characters, both to one another, and to the large, charred monster in the background, all while gracefully leading our eye around the page.

If there’s one criticism I have of this issue, it’s Henrichon’s muted color palette. I understand the motivation to limit the colors, making the setting in the Darkforce dimension crystal clear, but the effect is a lot of these action sequences all feel kind of ruddy-brown, making it hard to distinguish one element for another. A contributing factor might be that it’s unclear what, if anything, is lighting these scenes, limiting our sense of how light should fall on everything (and thus, where they are in relation to one another). Is it white light, or does it have some kind of hue to it? Are we understanding that everything would darker than shown, but is brightened here for our benefit? It feels like some specificity might have lent some clarity to the color work.

But on the whole, I really enjoyed this issue. We’ve seen Fisk’s role in Darkforce Manhattan teased a bit in Secret Empire, but I love the idea of having his relationship with the Defenders expounded on here. He’s just about the last character I’d expect to see rushing in in such heroic fashion, which makes me all the more nervous about whatever he’s expecting in return (and how Strange, Jess, Ben — and especially Daredevil — will react to it). I can’t wait to see what happens next.