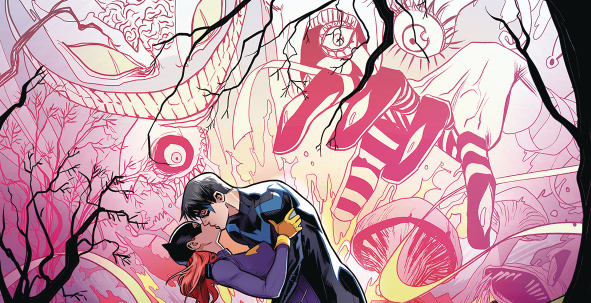 Villains tend to die by some one in ten chance coincidence of their own making – like Green Goblin getting impaled on his own glider. Similarly, storytellers jump through some creative hoops in order for our heroes to feel some respect of responsibility for their enemy’s end. Which is what Hope Larson does in Batgirl 15, as Nightwing vaporizes a woman’s body to dust via proxy.

In part two of “Summer of Lies,” we get a little more insight into the mysterious “Red Queen’s” plot, with frequent flashbacks to Dick and Babs’ younger caped adventures. Flashbacks are a frequently-used story device that typically give you a more solid foundation of where the story is headed.

The time shift in Batgirl 15 present opposite ends of a mystery that have yet to really satisfyingly compliment one another. The only that’s really connecting these two story threads is Babs’ “teacher” Ainsley, who’s GOT to be The Red Queen, right? I guess it’s just a thing of taste, but this is an unconventional mystery that doesn’t seem too concerned with its own mystery.

Back to the aforementioned vaporized body! In an attempt to deactivate some pesky nanobots, Nightwing suggests putting “The Red Knight” in an MRI. A nearby nurse overhears their plan and decides to help them out without their knowledge. She flips the switch, Nightwing warns her to stop and poor old Dr. Philbert becomes nothing more than an outline. Thus Nightwing is guilty of murder via proxy. 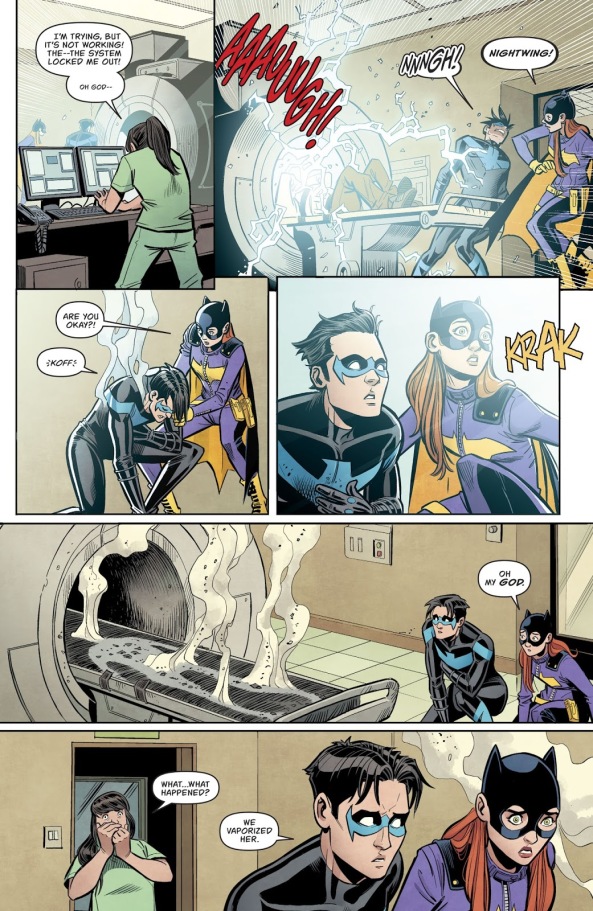 What I’m curious about is that last minute warning that Dick gives the nurse before she flips the switch. Why did he do that? She was only doing what he said he was about to do. Was there some kind of last minute epiphany about exploding nanobots? She was just following orders Dick!