Peter Parker: The Spectacular Spider-Man 6‘s big twist was spoiled for me before I could read the issue, but even in isolation it was a fascinating choice that legitimately surprised me. The fact that Chip Zdarsky was allowed to make such a move showed me that Marvel has quite a bit of faith both in Zdarsky as a writer and in Peter Parker as a title where big important things can happen, rather than just a humor-focused alternative to the flagship Amazing Spider-Man. The moment works even better in context, where it comes at the climax of an issue-long debate and argument between Spider-Man and J. Jonah Jameson.

The twist, of course, is that Spider-Man reveals his secret identity to Jameson. The two have torn into each other all issue, with Zdarsky and artist Michael Walsh digging into every possible reason they could have to hate each other. It’s deceptively smart writing, with Zdarsky revealing (and discarding) layer after layer of motive for Jameson before getting to the truth — that Jameson resents Spidey for not being able to save his loved ones despite saving so many other lives, and that he nurtures his hate because it’s really all he has left to live for. It’s a powerful moment because it (and, really, the entire issue) plays Jameson as a complex human being rather than a meme, but also because it reminds Pete that, for all the differences between Spider-Man and Jameson, Peter and Jameson are still family, and that means he has a responsibility to take care of him as well. 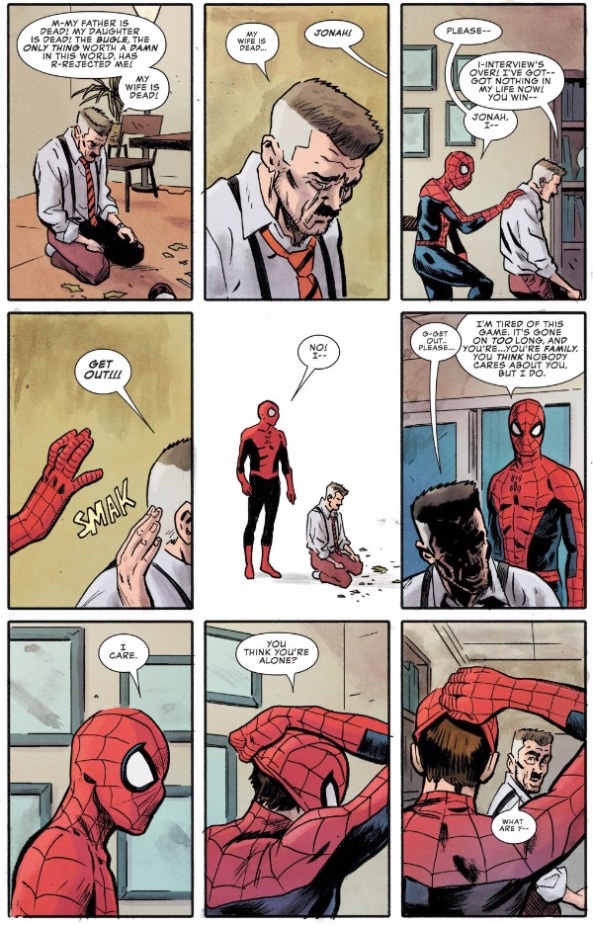 Peter and Jameson’s relationship has grown while his and Spidey’s never has, and as Peter says, he’s “tired of this game.” This isn’t just change for change’s sake — Zdarsky is using years of accumulated growth and development to make a massive change to the Spider-Man mythos, and does so naturally and convincingly. This is an atypical issue of Peter Parker in many ways, and I wouldn’t want every installment to be this heavy (the draw of Zdarsky’s Spidey is the humor), but it goes a long way to help balance out an interpretation of Spider-Man that has often come across as frustratingly unintelligent. It also starts drawing many of this arc’s disparate threads together into one coherent plot, rectifying another of my issues with this series thus far. Peter Parker: The Spectacular Spider-Man has been course correcting quite nicely since my complaints with issue 3, but this is its best and most reassuring installment by far.