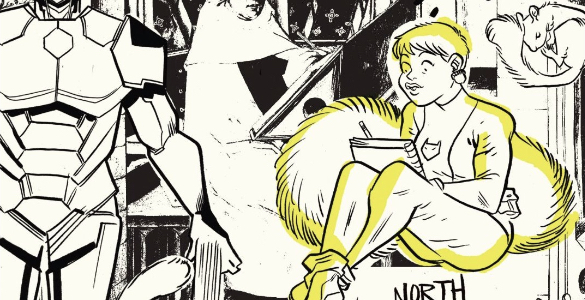 The provenance of epistolary texts are always weird. Actually, it’s probably less weird than traditional narratives, where we might somehow be privy to the private thoughts of the protagonist or even the perspective of an omniscient narrator, but epistolary texts necessarily draw our attention to the weirdness in a way that more traditional narratives don’t. Because we’re reading documents composed within the diegesis of the epistolary narrative, the ostensible writer of those documents are a character, even as the actual writer attempts to become invisible. That tension, between our hyperawareness of the fictional author, and purported obliviousness of the actual author, puts epistolary narratives in this weird netherworld of headspace, embracing the self-awareness of postmodernism in an attempt to produce an entirely un-self-aware story. It’s a concept that already folds in on itself, but writer Ryan North adds a few more wrinkles, confusing the notion of self-awareness enough that the confusion starts to be to point.

A few of the chapters in this issue play fairly strictly with the narrative conceit — that this is a zine put together by Doreen to raise funds to rebuild a library — feeling very much like pages made by amateurs. But, of course, even here, North can’t help but pull the veil back a bit. Spider-Man’s submitted comic (actually drawn by Rahzzah), for example, isn’t in the format of a poorly-xeroxed zine, but of a loose page on a desk. 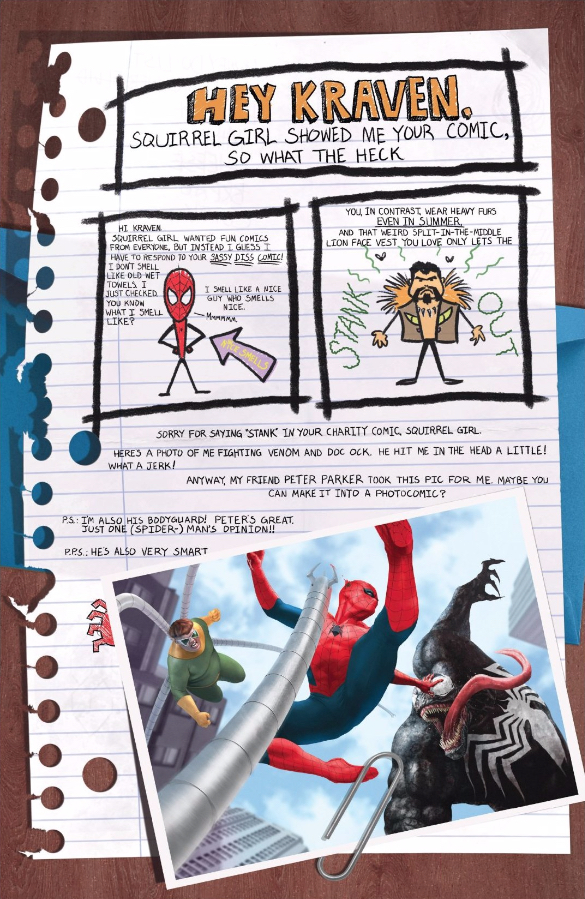 The page seems to be intended for the zine, we just aren’t seeing it in the correct format, as though we’re seeing Doreen’s perspective as she’s putting the book together.

Things only get weirder from there, including a framing story that is ostensibly drawn by Doreen (actually drawn by Madeline McGrane), but includes scenes that apparently take place after the zine is already completed, suggesting that the artifact we’re holding somehow exists within itself. That’s enough to make my head spin, but then Brain Drain (actually drawn by Tom Fowler) claims that his otherwise un-self-aware comic was written and drawn “live,” which is such a delightfully nonsensical notion, I have no idea what it means.

And all of those oddities exist right alongside some much more straightforward comics. Doreen’s intro indicates that these comics were written and drawn by the characters within them, but without that framing device, we might not recognize them as in any way unusual. At least, not in that kind of meta-narrative way — a Galactus comic drawn by Garfield creator Jim Davis is definitely unusual. The result is a book that runs the gamut from straightforward comic to meta-as-meta-gets. It’s a weird mix, but it’s all in service of the irreverent tone that makes this series so endearing