There’s really nothing quite like seeing a good close-up magician. As a jaded mega-skeptic, I always convince myself that if I focus hard enough, I can spot the trick. I’m not even sure that I want that–I love being fooled by illusions–but I always try. It feels like a survival tactic: if I can identify the trick, I can rest assured that the universe functions more or less the way I believe it does. If I can’t spot the trick? Well, then how can I ever be guaranteed of what is and is not real? Mister Miracle 4 zeroes in on this idea of focusing harder on what we believe to be a trick. And the truly disquieting thing is, no matter how hard we look, we can’t figure out what’s really happening.

As the goddamn geniuses they are, writer Tom King and artist Mitch Gerads provide a neat primer right at the beginning of the issue. Scott Free has a show today, because of course he does. We’ve seen these kinds of escapes within the pages of Mister Miracle before, and Gerads’ storytelling method is remarkably consistent whenever showing off these feats. It’s a single page, fixed camera, nine panels. The reader is keeping their eye on the barrel, simulating the sensation of keeping our eyes on the close-up magician’s hands.

Of course, there’s nothing to see. Gerads’ doesn’t have to show us any of the mechanics of Scott’s escape, and through the magic of comic books, he doesn’t even need misdirection. We can stare and stare and stare as much as we want, we’re never going to “see how he did it.”

And that’s what Mister Miracle has been teasing us with this whole time, right? What is really happening is aways in question. Orion brings that binary question to bear on Scott during his trial, asking him only to answer whether he believes a set of statements to be true or false. It’s a harrowing barrage of questions, and it seems like King has one hell of a grasp on Scott’s self-loathing, because they get to the point where they’re cutting right to the core of what’s wrong with our clinically depressed hero. 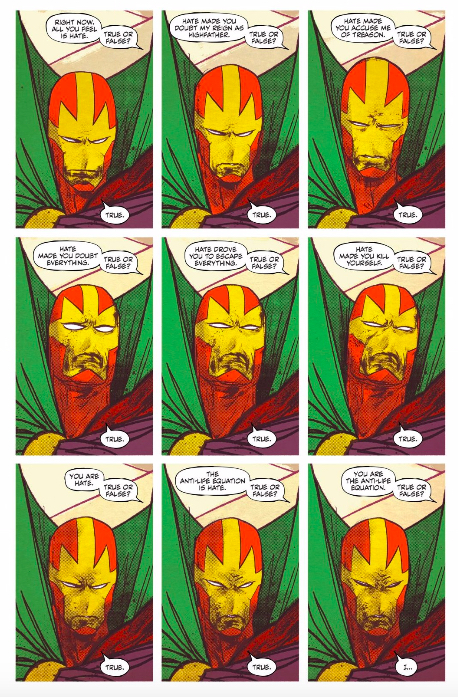 Again, Gerads doesn’t let us look away. There’s a quiet insistence that if we look closer, we might be able to figure out what’s really going on. But can we? Is Scott really freaking out and admitting to hating himself and possibly being an agent of Darkseid? Or, as usual, are we watching Scott escape, even if it doesn’t look like it?