A common criticism of Green Arrow is that he’s Batman by another name: he’s rich, handy with the ladies, and, as a non-powered superhero, he’s got an arsenal of crime fighting tech. The biggest difference between The Dark Knight and The Emerald Archer? Batman thinks with his head and Green Arrow think with his heart.

In Green Arrow 35 Oliver Queen and his not-dead mother Moira Queen embark on a great Poseidon adventure to retrieve the sunken treasures of The Ninth Circle. Surprising to no one but Ollie, Moira betrays her son and takes off with the goods herself. 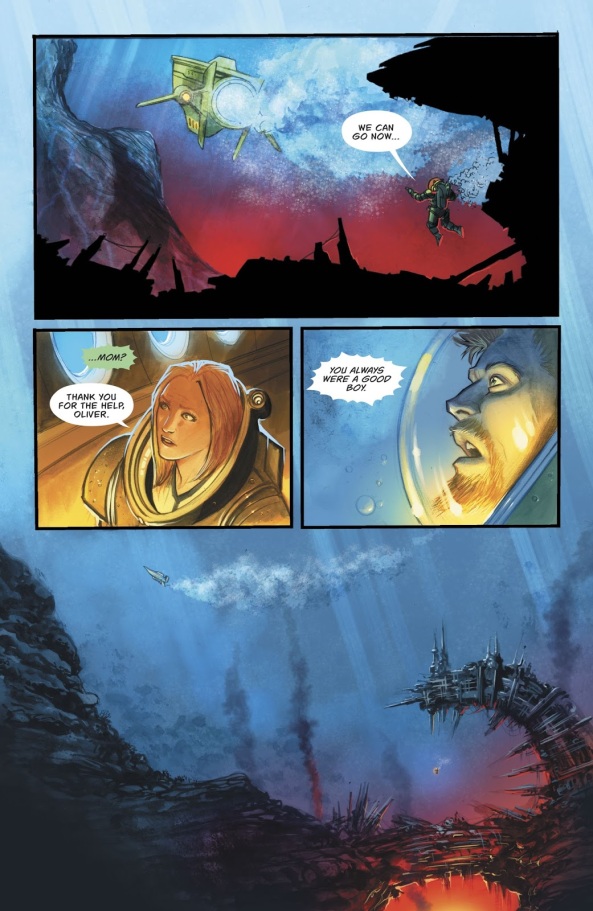 Come on Ollie, you’re gonna blindly trust your mom who lied about being dead?

The issue closes with Black Canary enlisting Fyff’s help to come to Ollie’s subterranean aid. Writer Benjamin Percy once again shows that he has a handle on Dinah and Oliver’s relationship, as Dinah’s the one who realized Ollie likely walked himself into trouble.

Though much of the action takes place near the ocean floor, Percy and Juan E. Ferrerya have a couple different moving pieces in the Oliver Queen murder trial. We see just how dirty dirty cop Rios is as we see him blow up his partner and flashback to him framing Ollie for murder.

As Emi tries to crack open not-dead Wendy Poole, Ferrerya zooms in on Wendy’s eye and we see the events of her “murder” unfold as she remembers them. It’s implied that Wendy underwent other traumas at the hands of The Underground Men, but this flashback proves that what she knows is the key to Ollie’s trial. Well, that and the fact that she’s not dead.