A common criticism of Green Arrow is that he’s Batman by another name: he’s rich, handy with the ladies, and, as a non-powered superhero, he’s got an arsenal of crime fighting tech. The biggest difference between The Dark Knight and The Emerald Archer? Batman thinks with his head and Green Arrow think with his heart. END_OF_DOCUMENT_TOKEN_TO_BE_REPLACED

How many times are Oliver Queen’s parents going to come back from the dead? In addition to some classic Ollie/Dinah team-ups, Green Arrow 34 functions primarily as a bit of filling in the blanks for the resurrected Mama Queen. END_OF_DOCUMENT_TOKEN_TO_BE_REPLACED 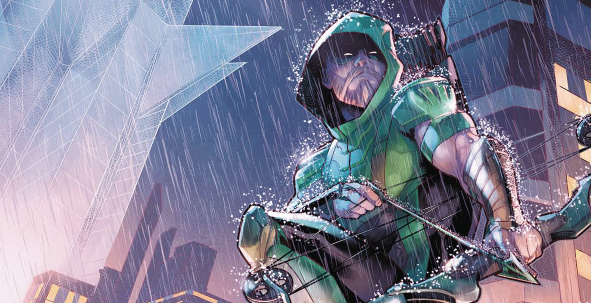 Machinations abound in Green Arrow 33. The issue finds Oliver Queen back home in Star City, ready to once again protect his home and prove his innocence, but for the moment Oliver seems to be the only person in the city without some sort of master plan — but not without a trump card. END_OF_DOCUMENT_TOKEN_TO_BE_REPLACED

Spencer: Much like Wonder Woman or Batwoman, Jeff Lemire’s run on Green Arrow has been steadily building its own mythology that feels completely removed from anything else going on in the DC Universe. Despite that, Lemire’s still managed to make Ollie’s connections to the Justice League of America and Roy Harper work within the context of his larger saga, but he isn’t so fortunate with this month’s Zero Year story. The tie-in feels pointless, and it’s only the new character of John Diggle that anchors things to the book’s ongoing plot at all. END_OF_DOCUMENT_TOKEN_TO_BE_REPLACED