Patrick: Discovering oneself is an inherently lonely pursuit. In high school, I was discovering my own sexuality, and had left my then-girlfriend to pursue a relationship with this dude from my theatre class. I didn’t know what I was doing, and I ending up nuking that relationship as well, effectively alienating everyone from all social groups I could have ever claimed to be a part of. Looking back on the events, I was surrounded by people who cared deeply about me, but I couldn’t really see them at the time. I saw me, and only me. This was a time that should have been social and should have been about finding my place in a much more interesting world. But that was so hard to see from the perspective of a 17 year old kid who couldn’t stop wrestling with the question “am I gay?” Secret Weapons 0 presents the intense loneliness of self-discovery as an origin story unlike any I’ve ever read. Nikki finds the answers to so many personal questions, but ends up losing just about everything outside of herself.

That is perhaps an ironic story for a character who’s super power is based on communication – Nikki Finch can talk to birds. But birds ain’t people. Nikki ends up alienated from everyone by the end of the issue, whether because of her own actions or just through the simple course of events. Writer Eric Heisserer starts with the kind of mundane high school rejections that everyone experiences. She fights with her parents, she gets dumped after her boyfriend has sex with her, she even gets knocked down to third chair flute. These are relatively minor indignities, but every one of these steps is immediately relatable and understandable.

All of these little failings are punctuated by the repeated lure to participate in the HGC program. Again this is instantly relatable, as the HGC acts as the Valiant equivalent of going off to college or working on a boat or backpacking through Europe. It’s the thing that gets her “out of this town.”

Nikki is similarly focused on the possibilities of what lies ahead, instead of what is actually around her. Artist Adam Pollina emphasizes this throughout by stubbornly focusing his camera on Nikki’s face, placing it in the middle of virtually every panel. In fact, Pollina’s presentation is incredibly regular and rhythmic, showing four panels to a page without exception. This layout, and Nikki’s presence in the middle of every panel, is so regular it almost becomes hypnotic.

I’m reminded of the line that closes out The Great Gatsby, only in reverse. Instead of being borne back ceaselessly into the past, Nikki beats forward in time, towards a less certain future. Heisserer makes the story trip steadily forward through time in fits and starts, identifying each new day with a calendar entry on Nikki’s phone.

Or at least, that’s how it starts. As the story gets weirder, and Nikki’s experience becomes harder for the reader to concretely relate to, so too does Heisserer’s method of marking time. I don’t know who to credit with the evolving setting chyrons, but it’s a masterstroke of subtle storytelling. Instead of marking her time in days on her phone — which is a thing that Nikki controls and is empowered by — we switch over to an HGC calendar. The graphic resembles a tabbed file folder, as though we’re looking back through Nikki’s experience as it is logged by researchers. At the Willows, the chyrons change yet again, this time taking on the appearance of corporate letterhead — just clean enough to be genuinely upsetting. Both at HGC and the Willows, the reader is clued into the date by means that have nothing to do with Nikki and everything to do with her bizarre setting. It’s not until she’s out on the street that she regains that power, but now they’re post-it notes. She has nothing — no family, no home, and no institution supporting her, and that’s reflected in the low-rent way she marks time.

All of this works together to create a stunning sense of inevitability to Nikki’s journey from high school student to homeless superhero. That’s remarkably appropriate, as this serves as a prequel to 2017’s excellent Secret Weapons mini-series. I’m almost always down on zero issues, but this one manages to fold medium and tone and storytelling into a neat package that also acknowledges the reader’s expectation for this particular volume. I’m floored.

But I also don’t really feel like I’ve scratched the surface of this thing. Spencer, how did you feel about having Nikki in every panel? Didn’t it feel weird when Pollina places her slightly to the left or right of center? Or when he draws her in profile instead of head on? Also, what do you make of that ending? Is Nikki finally willing to find value in something outside of herself? We do get a panel that’s focused on someone else. 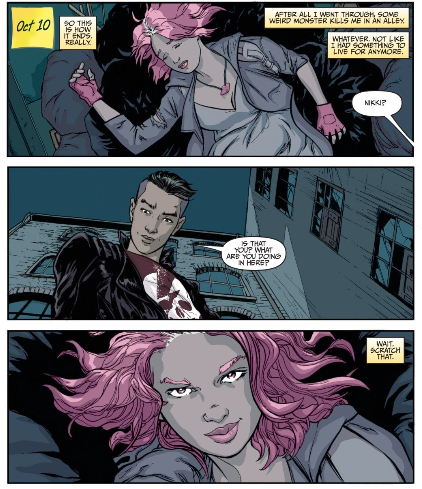 Man, it’s so smart. Especially because the teaser at the end of the issue promises that “Owen will Return.” This page is a perfect pivot from Nikki to Owen.

Spencer: Patrick, I love your read on Nikki here. I don’t think she’s being intentionally, hurtfully selfish (other than running off on her parents, which hurts in a way a teenager could never understand), but she’s definitely focused on herself in that way teenagers tend to be, and it comes across in the way the Pollina and Heisserer’s layouts emphasize Nikki, making her the focal point of every single panel.

While these panels aren’t necessarily told from Nikki’s POV, they do share her intense preoccupation with herself. The first finds Nikki in the crowd at a concert, where she immediately stands out, the only person facing away from the stage, on the phone at an event that’s loud and all-consuming and not really meant to be talked over. The center of attention here should be the band on stage, but Nikki manages to warp that because this is her story.

In the others, it’s notable that all eyes are on Nikki, be it her classmate admiring her in panel three or them looking on jealously in panel four. It’s also notable that Dean’s head is cut off completely by the panel border here, which happens more often than not when he’s on screen. Later in the issue it happens when she starts feeling distant from him, but here it emphasizes the gift and the attention Dean is lavishing Nikki in more than Dean himself. Nikki is without a doubt the center of the world in Secret Weapons 0.

I don’t necessarily find that to be a bad thing, or at least, I don’t really think less of Nikki for it. Patrick’s right to refer to HGC almost as going off to college for Nikki. It’s a chance for Nikki to forge her own path in life and do things she wants to do, which it doesn’t seem like she’s had much opportunity to do before (she dies her hair pink, which her parents forbid her from doing, the moment she gets the chance). Kids who feel confined and not listened to are more likely to go nuts the moment they get freedom, and based off her childhood experience with tumbling class alone, I can see why Nikki would feel confined. I appreciate that things with her parents aren’t that black and white, though. Nikki’s father is capable of being cruel and self-centered, but he and Nikki’s mother’s advice about HGC isn’t necessarily wrong, and while it could be considered cruel to cut off her cell service (and thus all lines of communication), it could also be considered tough love for the daughter who deliberately disobeyed and ran away, thus choosing to live her own life for the moment. Even with Nikki in the spotlight, Heisserer finds room to give his minor players some shading and depth.

Still, the focus on Nikki does make it especially strange when she’s off-center, or looking away from the camera. It happens enough that I can’t come up with some grand unifying theory that applies to each and every instance, but each use does manage to be meaningful in its own way.

Take the panels that open and close this spread, for example. In the first Nikki’s looking away from the camera because she’s entranced by the possibilities of the HCG program. She’s seeing what it’s done for others, but she spends the rest of the spread trying to unlock that power for herself, and failing miserably. Her pain overwhelms that final panel — she’s not only front and center, but pretty much the only person or object of note — but she can’t bear to look at the camera. She’s can’t bare to be the center of attention anymore because it’s painful to finally have that attention and only find failure.

In some ways, the rest of the issue uses Nikki’s distance away from the center of the panel as a gauge of her mental state. Take the very next page.

Nikki, feeling lost and alone, has drifted off to the right side of that first panel. Once she realizes she can talk to birds, though, she deliberately slides into the center of the panel so that she can engage the pigeons; the birds likewise flock to her, surrounding her in that final panel the way her classmates did earlier in the issue. By discovering her powers she thinks she’s found the thing that will give her purpose and focus. Harada disagrees, shipping her off to a center for Psiots with “useless” powers.

It’s there that Nikki’s self-esteem starts to sink even further, eventually hitting rock bottom when she finds herself on the street.

It’s implied that Nikki is at least considering suicide here. Much like that moment on the bench, she’s off to the side of the panel, feeling lost and alone. Again the birds join her, try to comfort her, but this time she doesn’t scoot over to the center of the panel — they have to come to her. She feels like her story has reached its ending. I do think the birds are of at least some comfort to her — if nothing else, she doesn’t actually jump — but they aren’t enough. The birds aren’t enough alone to live for.

That’s where Owen comes in. Patrick’s right to focus on the significance of Owen appearing in that panel instead of Nikki. He’s what Nikki can live for now. I don’t necessarily think that Heisserer and Pollina are suggesting that Nikki will live for a boy — though her crush on Owen no doubt plays a part — but that she needs to live for others. That’s what eventually makes her a hero, after all, rather than just a girl who can talk to birds. Finding a way to use her abilities to help others is just the purpose Nikki needs, and it’s what made Nikki feel so compelling, powerful, and fully-formed when she first appeared in the original Secret Weapons mini-series when the rest of the cast still had so far to go and so much to learn.