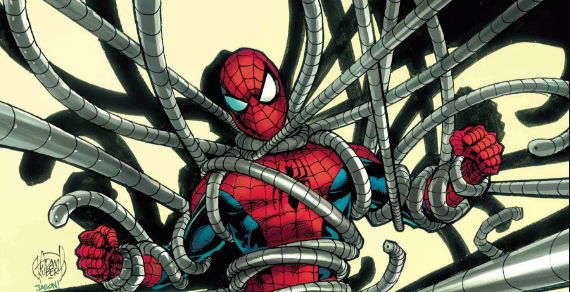 One of my favorite episodes of Star Trek: the Next Generation involves Worf and parallel dimensions. In it, Worf is returning to the Enterprise from a Bat’leth tournament and through a bizarre set of circumstances finds himself transporting to different versions of his universe. In one, he’s married to Deanna Troi. In another he goes from placing first in the Bat’leth tournament to ninth. In yet another, he’s responsible for the inadvertent death of Goerdi La Forge. It’s a fun episode because it sets familiar characters and settings against an unfamiliar backdrop. This “what if” is a favorite of every Star Trek show and the same goes for comics. That being the case, you think I would be tired of the conceit, but the very opposite is true — I love it.

This is the reason why I enjoy the 304th issue of Peter Parker: the Spectacular Spider-Man. After adventuring to the past to save the world from the Tinkerer’s evil plot, Peter, Teresa, and Jonah return the present only to find it different from how they left it. Not only are aliens who were threatening to enslave Earth gone, but Norman Osborn is running the country through a puppet regime of his son, Harry. Obviously, this is not a good set of circumstances.

Peter and company eventually find an underground resistance cell superheroes resisting the evil reign of the Osborns. This leads to Peter trying to break Dr. Doom, of all people, out of prison so he can get back to his rightful timeline. The only problem with this is that there is a formidable foe blocking the way. 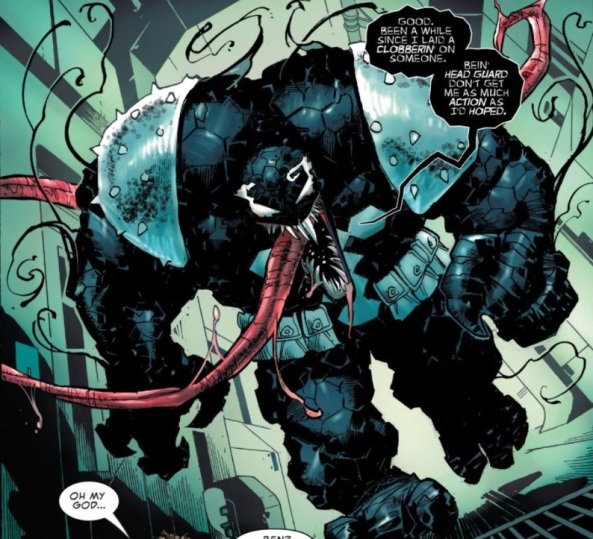 The mix of Ben Grimm and the Venom symbiote is terrifying! Both are overpowered (anti)heroes as it is, but combined they make for a truly formidable foe. What makes this unlikely pairing fun is that it’s hard to imagine a set of circumstances where they would join together. Guessing how it came about makes for a good time. Interesting as that may be, I wouldn’t bet on it being able to carry a comic book where that’s the sole plot. This “what if” scenario is fun here because it’s surface level and if anything else it’s just fun to see Venom with an extra long tongue and some kick-ass shoulder pads.

All comic book fans have enjoyed discussing “what if” questions like this before and it’s always a treat to see them actually come to fruition on the printed page. Peter’s adventures in a parallel timeline promise to be entertaining solely for this fact alone. Sure, it may not be the most original storytelling device, but I’ll always find it fun.

One comment on ““What Ifs” in Peter Parker: the Spectacular Spider-Man 304”