I had a writing teacher in college that used to say there were four kinds of stories. The first is the most common: the hero wants something, gets it, and is happy he got it. We see this one in superhero media all the time, right? Batman wants to catch the Riddler, he does, feels great about it. The second type of story is the hero wants something, gets it, is unhappy he got it. This is the old Twilight Zone twist — “I can live forever, BUT AT WHAT COST?” The last two kinds of stories are similar: hero wants something, doesn’t get it, is happy to have not gotten it, and; hero wants something, doesn’t get it, is unhappy to have not gotten it. Doctor Strange 390 manages to be a weird mix of all these types of stories, where even the question of who our hero is leads to some fascinating ambiguity. Donny Cates’ send-off to Doctor Strange is as mysterious, and true to the tone of the character, as a reader could possibly hope for.

The whole issue is built on these kinds of subtle contradictions. Right from the first page, it’s striking to see Frazer Irving’s moody, atmospheric art telling the goofy story of Spider-Man talking to Zelma outside the Sanctum Santorum. Irving’s style is perfect for a Doctor Strange book — it is somehow textured and flat at the same time, implying a sort of uneasy relationship between the reality and the medium. I’m used to seeing him draw huge crazy splash pages with demons and magicians and whatever other epic noise the writer throws at him. But Cates slows Irving to a decompressed crawl, keeping the reader in delightfully human moments between the characters. 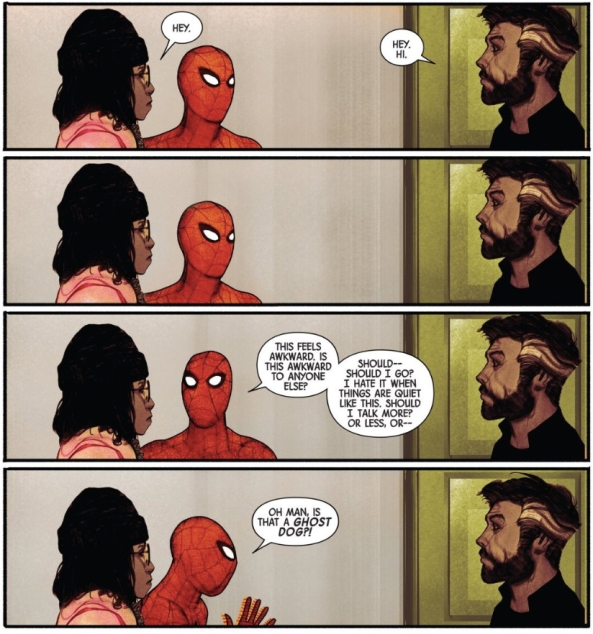 It’s all such a strange application of Irving’s talents, and the effect is totally disarming and enchanting. When Spider-Man actually gets his wish — the ability to talk to spiders — we see one of those simple story types I mentioned above play out. Spider-Man gets what he wants and is not happy with the result… ‘cuz, y’know, spiders are fucking weirdos. Who would want that?

But that’s sort of the perfect set up for what Strange and Zelma are about to go through. What the hell do they even want at this point? In a moment that perhaps betrays his true desires, Strange asks “are you coming back?” and it takes Zelma and the creators two panels of silence before they can confidently answer “No.” I guess if there is a thing that both of these characters want, it’s closure, and this issue does provide that for both of them.

3 comments on “Ambiguity and Closure in Doctor Strange 390”