I saw Ralph Breaks the Internet and I must say I was a little disappointed – maybe because as a Disney movie, it sugar coats the terrible underbelly of the World Wide Web. And while Marvel is also a Disney movie, I feel that Tony Stark: Iron Man 6 tackled internet culture in a more brutally honest manner.

eScape – Stark Unlimited’s new online Virtual Reality platform – has been in its beta phase and is ready to hit the market. As ever, Tony Stark is more focused on his latest invention than anything or anyone else in his life. Ever the control freak, Tony wants to be able to micromanage every little piece of his creation – which is a tall order when you are dealing with the endless vacuum of the internet. 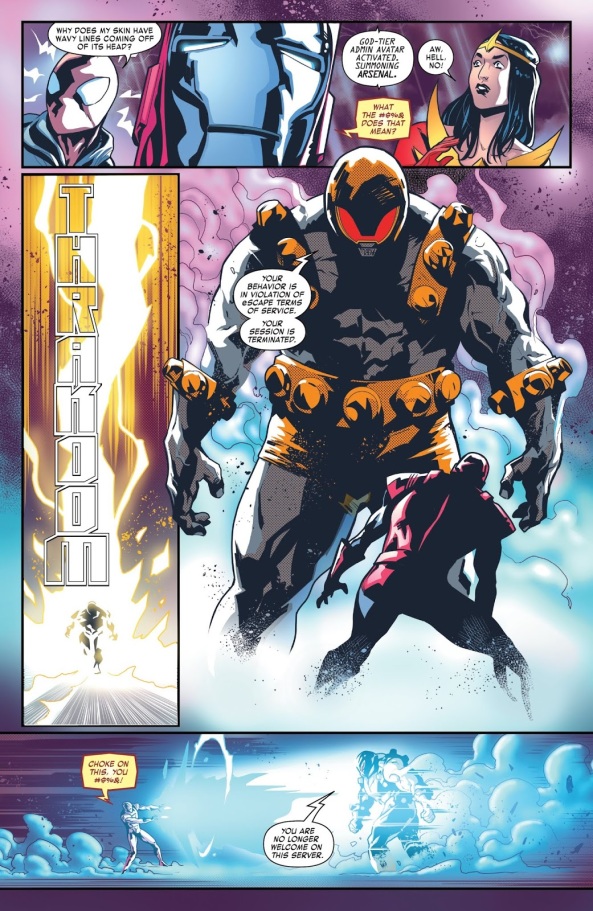 Tony’s digital security enforcement comes in the form of a roided-up behemoth known as “Arsenal.” Early on in the issue Arsenal shows up in a bolt of lightning to oust an eScape user for using profanity and therefore failing “to abide by community safe space codes.” It’s a noble effort on Tony’s behalf, but as the FCC has known since the internet’s inception, it’s hard to police the internet.

By the end of the issue however, it seems that Tony may have created too perfect of a firewall in Arsenal, as he begins to attack Tony’s mother Amanda for disagreeing with him. Ain’t that always the way with AI? They follow the rules to a T, but that typically comes back to bite the humans who made them in the butt. 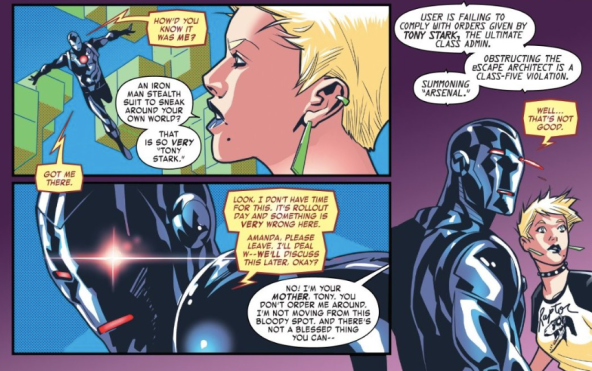 Dan Slott crafts a clever analogue for the hazardous landscape that is online social interactions, and the trolls within them. By the end of the issue, he has also poised one of these trolls to become a future thorn in Tony’s side. The Controller recruits the young boy who was ousted from eScape to his battle with Tony Stark.

As silly as “the bad buy is an internet troll” it kind of makes sense, no? Not just on the very literal level – because as we all know internet bullying and toxic behavior is very much a problem today. But the idea of a dangerous individual or organization recruiting angry young men to their cause is an even bigger threat to our world.

One comment on “Tony Breaks the Internet in Tony Stark: Iron Man 6”