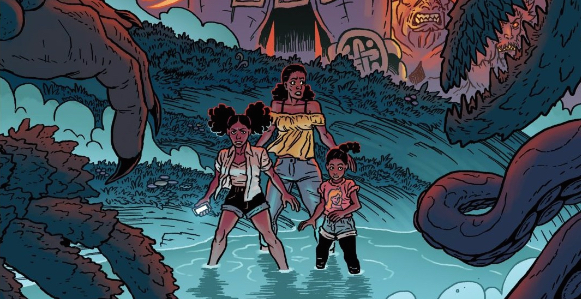 In our discussion of Cloudia and Rex 1, I praised creators Ulises Farinas, Erick Freitas, and Daniel Irizarri for their honest portrayal of a grieving family in extraordinary circumstances, and their work continues to sing in this second act. I’m especially taken with their ability to deftly inject humor into the darker moments of the issue, like when Death sends Cloudia a text message posing as a boy she likes that reads, “Hello, would you mind engaging in a phone speak?” The fine line they walk between making Cloudia an honest-sounding selfish, reluctant teenager, but still relatable and likable is, frankly, remarkable. END_OF_DOCUMENT_TOKEN_TO_BE_REPLACED

Mark: Everyone in Ulises Farinas, Erick Freitas, and Daniel Irizarri’s beautiful Cloudia and Rex 1 is just trying to survive. For the deities like Death, Hypnos, and Ala, the threat to their existence is very literal; their entire plane of existence is under attack from Seraphim sent by the High Waveform as it looks to consolidate power and become the one, true God. For 13 year-old Cloudia, her younger sister Rex, and her mom, the threat is more existential. A close knit family, their ties are beginning to fray in the aftermath of Cloudia’s father’s death. END_OF_DOCUMENT_TOKEN_TO_BE_REPLACED

Spencer: Once, way back when Wally West was the Flash, he ran so fast that he merged with the Speed Force, a fate from which no speedster had ever returned. Wally did return, though, all because of the love of his life, Linda Park. Wally called Linda his “lightning rod” — no matter what weird shenanigans he had to deal with, Linda’s love always kept him grounded in reality. I think most of us have a “lightning rod” of one sort or the other, some person or thing that acts as a constant in our life, that keeps us tethered to our old lives even as everything else around us changes. Dick Grayson has gone through more changes than most ever since his “death” in Forever Evil, but even as an agent of Spyral, he had both his mentor Batman and his faith in his own abilities acting to keep him grounded. With Grayson 10, though, Tim Seeley, Tom King, and Mikel Janin strip those last familiar comforts from Dick, leaving him with nobody he can trust — not even himself. END_OF_DOCUMENT_TOKEN_TO_BE_REPLACED