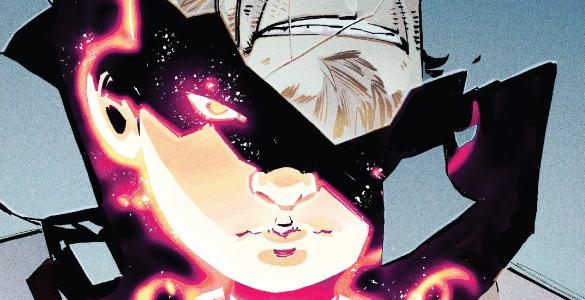 There are infinite possibilities occurring simultaneously, every second.

And with that, Jai Nitz and Wesley St. Claire lay out the case for more Fu Jitsu. Sure, they get more specific at the end of the issue, encouraging folks to spread the word about the series to help keep it alive, but the reason to keep it alive is revealed right there in Fu’s opening lines: this is a series built on infinite possibilities. Indeed, Nitz and St. Claire are so confident with that truth that they don’t need to bother explaining how future issues could even be possible. [SPOILERS aplenty after the break]  END_OF_DOCUMENT_TOKEN_TO_BE_REPLACED

Man, I’m such a sucker for time travel stories. Fu Jitsu 4 has plenty of other sci-fi insanity that someone might latch onto, but I can’t help but be charmed by the little time paradoxes and other time travel quirks built into the narrative. Indeed, the irreverent tone that Jai Nitz and Wesley St. Claire have struck with this series allow them to have much more fun with those tropes than any other time travel story I’ve ever encountered. END_OF_DOCUMENT_TOKEN_TO_BE_REPLACED

The general thesis of Fu Jitsu appears to be: “comics are weird, but resonate with us anyway.” Or perhaps the resonance is because of the weirdness. Writer Jai Nitz and artist Wesley St. Claire never really imply causation in one direction or another, but with issue 3 of Fu Jitsu, they do make a strong case for the last correlation between the two qualities throughout comic book history. Yup: issue one was about the diegetic past, issue two was about a diegetic present, and issue three is about the meta-past. END_OF_DOCUMENT_TOKEN_TO_BE_REPLACED

Drew made a case for the first issue of Fu Jitsu being the height of absurdity. He wasn’t wrong: Fu, and his attendant mythology are an unwieldy mess of ancient Chinese mysticism, Biblical appropriation, and nuclear-fueled alternate history. Fu’s connection to the “present day” was largely superficial — he enjoys football and Whataburger. But issue 2 rams the historical absurdism into modern — even future — absurdism, trading in some of the least-likely real-life threats from 2017 and beyond.  END_OF_DOCUMENT_TOKEN_TO_BE_REPLACED 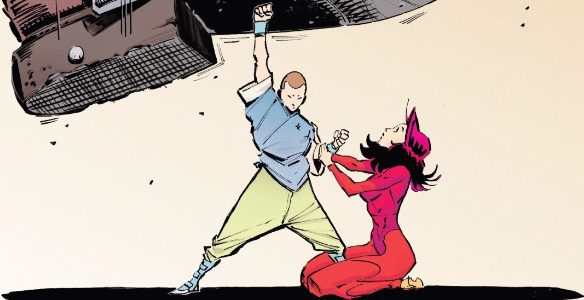 I just killed James Dean and disarmed a bomb from the future.

My own interpretation of the solicit for Fu Jitsu 1 was “if Forrest Gump was a genius and immortal” — it’s an absurd premise, but one that could be fun. Turns out this issue is actually several times more absurd than I expected, but it embraces that absurdity so enthusiastically, I can’t help but love it. END_OF_DOCUMENT_TOKEN_TO_BE_REPLACED

Drew: What is religion for? Having not grown up with religion, I’ve never really understood. I can appreciate the origins of religion as a kind of pre-scientific way of explaining the world, but what’s the appeal nowadays, when most reasonable people accept that these stories aren’t literally true? I honestly have no idea, and religious friends can only give vague answers about community and faith. I suspect different people will have different answers, but for me, it seems that religion scratches an itch I just don’t have. That sentiment is sometimes met with pity from those who genuinely believe that a religious life is more fulfilling. I’d never be willing to dig through the stories and traditions that define any one faith, but what if faith wasn’t part of the equation at all? Miracleman 4 asks exactly that, looking into the life of a woman who has no doubt about the validity of her religion. END_OF_DOCUMENT_TOKEN_TO_BE_REPLACED