Peter: As someone who read all 52 issues of The New 52, I had high hopes for some characters that I felt, in my opinion had been neglected in the past. Aquaman was one of these. From his recent revival in Blackest Night, and Brightest Day, also penned by author Geoff Johns and drawn by Ivan Reis, from his portrayal as a Black Lantern zombie, to the Water Elemental guardian as chosen by the The Entity, Arthur has gone through some fairly drastic changes in both physical appearance and mental status in the recent past. Coming into the New 52, I was especially excited because Johns wasn’t doing a full remake of Aquaman, like many other characters in the New 52. Johns instead decided to use the character momentum that he had started to develop in previous storylines, and continue on with it, and that is what Johns, Reis, and company are doing here.

This issue begins with Aquaman literally falling out of the sky, into the middle of a desert. We are immediately set up with an obvious, but powerful story element: Aquaman, in a desert. This issue really starts out with a bang; the first page consists of Aquaman falling from the sky and landing in the middle of a desert. No explanation, just Aquaman plummeting from the sky, seeing his predicament and reacting simply with a furrowed brow and, “Uh-oh”.

Let the ‘Fish out of water’ metaphors begin. Then we Tarantino back twelve hours to find Arthur still brooding over the moral dilemma that he experienced with the Trench, as it has been newly capitalized. He then, to his surprise, receives a phone call from the US Navy, who ask for his help examining an ancient Atlantean glyph found in the remains of the destruction wrought from previous issues. Come to find out, this is really old from before Atlantis was sunk, and is a ‘black box’ of sorts, with information on it. Also, fun fact, the ‘A’ on his belt is for Atlantis, not Aquaman! Crazy.

The Navy facility is attacked by men wearing suits of armor, with guns, who are after the glyph. Aquaman fights them all the way to their ship, and right after he discovers that they are not human, but Atlantean, the ship explodes, dropping Aquaman into the desert. Cue end of flashback. As Aquaman is wandering the desert, in search of water, he pulls a Luke Skywalker and starts to hallucinate, a la Empire Strikes Back. These hallucinations take the form of his human father, Tom Curry, and are riddled with self doubt, failure, and ‘why are you doing this superhero thing’ type of questions. 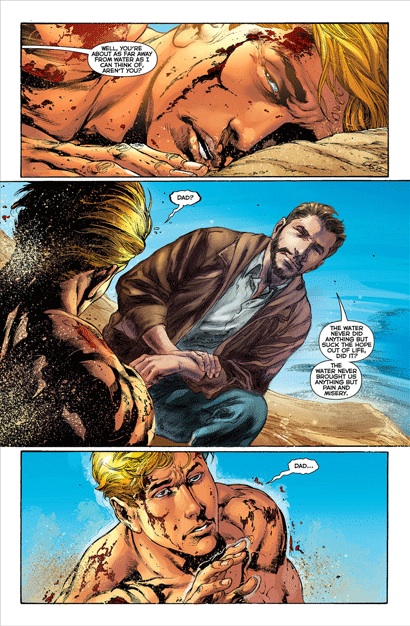 As this continues, Aquaman finds the glyph, and upon submerging it in the water leftover from the explosion of the Atlantean ship, activates help-me-Obi-Wan-Kenobi-you’re-my-only-hope hologram containing the readers’ first hints about how Atlantis got underwater, that it did NOT sink on its own, but someone SANK it. Mind=Blown. Aquaman is then rescued by a helicopter, and returns home. Phew. Johns has been quoted that he continually asks for additional pages in his stories, and he got them here, and made use of them, full of Reis’ beautiful artwork.

What we have here, is a superb bit of writing on Johns’ part. He seems dedicated to make Aquaman a better character for the readers, more dynamic, with more chutzpah. This issue does just that. We learn quite a bit about history, in both Tom Curry’s past with the water, and Atlantis’ past, and how someone else sank it on purpose, using the sea as a weapon. I personally hope that this last bit will lead us to the introduction of a new Aquaman villain with some insane power, because, with the exception of Black Manta and Ocean Master, Aquaman’s villains have been a hodgepodge of minor villains. I want someone who is on caliber with Luthor, or Joker, someone how had the power to sink Atlantis, using the sea, which would create all kinds of awesome since this is where Arthur draws his power.

Johns also examines the duality of Aquaman, who, via these hallucinations, is going through a bit of an identity crisis, as he finds he really doesn’t belong in either Atlantis or on land, and no matter how hard he tries people will always struggle to except him. This is really what this story is about, and what I am hoping, the Geoff Johns will continue to examine in his next few arcs of Aquaman. Please please please let this happen. If there is anyone who needs this more than Arthur Curry, let them speak now.

There were, however, some things that disappointed me in this issue. First and foremost, the US Navy has Aquaman’s cell phone number? We certainly have come a long, boring from way the Bat-Signal or supersonic Superman wrist watches. Also, while I understand the choice of Tom Curry for Arthur’s hallucinations, it was poorly placed. If you are a new reader, you don’t really know Tom Curry, and to have him berating his son, telling him that the water never gave us anything good, seems really abrasive. And finally, the set up for next issue, which I have been calling “Mera Goes to Town”. This sounds like a bad ‘Ernest’ movie, and looks to continue the ‘fish out of water’ metaphors into the next issue. But overall, these are the really the only problems I have with this issue. After the Trench storyline, I hope to see something big come from the creative mind of Geoff Johns, and the pencils of Ivan Reis.

Let’s take a minute and reflect on things that I loved. I loved that this issue is fairly light on action and heavy on the character development. It’s just what Aquaman needs to continue to grow into anything someone like me, a long-time comic reader, or say, Drew/Patrick who are really getting into this for the first time. Isn’t that what the New 52 is about? Revitalizing the old with either full overhauls or lots of small ones? After the last pages of Aquaman 4, I was worried, but this issue has restored my faith. Johns goes back to the bread and butter of Brightest Day: character development, and hits a home run. Also, I just cannot say enough about the art in this issue. It is gorgeous. Reis and team nail it hands down. This book is brought up to another level with the amount of detail being achieved and flawless integration into the storyline.

And now for some final thoughts, Aquaman in a desert. It’s so…obvious, and yet, it’s the perfect setup. Sure, it’s taking a direct jab at his perceived uselessness away from the water, but like with the Aquaman jokes in the first arc, Johns uses that to his advantage. Aquaman hallucinating in the desert creates some character advancement, and while I can’t imagine that anyone doubted his determination, his refusal to die made for a great story. And all without the reader needing to be reminded just how often Arthur has to get a drink if he wants to stay alive. I am also jacked for the potential history lessons of Atlantis that hopefully will be explored, and as mentioned earlier and bomber new villain for Arthur to face down. Shelby, are you as excited and enticed as I am?

Shelby: Well Peter, I am certainly more excited and enticed than I was after the end of issue 4. Before I explore this issue further, let me digress a bit on why I’m reading Aquaman in the first place. I approached the New 52 riding the high of Blackest Night/Brightest Day, and never in my life have I been more excited for Aquaman. I loved what Johns did with him, and I wanted more! I would be lying to say I wasn’t disappointed by The Trench arc; I loved the self-awareness, the “yeah, we know Aquaman sucks” shtick, but I found the story to ultimately be a let-down. But then BAM! Desert! I was immediately wowed by the opening page; just 3 panels of tiny, defenseless Aquaman falling thru a blue, blue sky before a “thoom” of an impact. Delightful. In the third panel, we can even see that “oh, shit” moment when he realizes what exactly is about to happen. Another homerun for Reis.

I have to say, though, I’m not quite as tickled with the story as you are Peter. I mean, first of all, 12 hours earlier? How long was he clinging to the side of the plane?! This is some real Indiana Jones riding the Nazi submarine magic, here. Actually, a bulk of this book reminds me of some of my favorite sci-fi moments: the scientists in the lab is straight out of the dissection scene in Independence Day, we’ve got the father-figure hallucination in the wasteland a la Return of the Jedi, and we’ve even got our “Help me, Obi-Wan Kenobi” moment with the artifact glyph-a-majigger message. Sure, Johns could be continuing to play with classic tropes to ultimately tell a more complex story, but come on man! This is getting distracting.

This isn’t to say I totally disliked Aquaman’s latest adventure. Tom Curry is still depicted in the beautiful watercolors of the flashback from issue 3, made even more stunning by the juxtaposition of the more realistic style Reis and Prado use. And while the delivery method seems a little clunky, I am generally excited for this new story arc. The myth(?) of Atlantis is common cultural knowledge; the city’s mere existence has been debated since Plato first wrote of it. I am looking forward to exploring the story of its sinking, and I am especially looking forward to Johns’ handling of it. While his big-picture style does make for some slow reading in monthly doses, I think this is a big-picture sort of story that he is well-suited for.

I just hope our little “Mera Goes to Town” adventure pans out into something. I won’t lie, one of the reasons I decided to read Aquaman was Mera. She was such a rock star in Blackest Night/ Brightest Day, and I wanted more of her tough, no-nonsense, ass-kicking ways. She’s been pretty wimpy so far, and I am getting a little impatient waiting for the strong, independent personality Johns developed for her. Maybe she’ll have to fight some watery demon from her past for the last bag of dog food in town? Who’s to say?