Peter: Since its return last year, Aquaman has been selling extremely well just about every month. That is really surprising to me. For a while I’m wasn’t sure what was driving these sales. Was it Aquaman nostalgia? Was his impressive run in Brightest Day? Out of all the books I have been reading, it’s been pretty hit and miss. It has some really great issues (issue 5) that have been amazing, and some really terrible issues (issue 6) that just don’t work. With the introduction of the Others storyline, Aquaman has quickly become one of my favorite books again. This issue is no exception, giving incredible historic elements, as well as dynamic characters.

Introducing The Operative: THE premiere super spy in the world. Right now, he’s breaking into Black Manta’s place, all the while arguing with someone on his comm. He finds a map and pictures of the Others. He uses his Atlantian artifact, a Key of some kind, to open-sesame his way into Black Manta’s safe, discovering information on Dr. Shin. He gets in a fight with some of Manta’s goons. He busts out a window, and calls for evac Skyhook style from his plane. Relaxing inside, he loses the mask, showing his wrinkly old face, discussing things with his son, and sets off to find Arthur.

The action picks back up with the face off in between Black Manta and Arthur. As The Prisoner and Ya’wara move innocent people to secure locations, Manta and Arther throw down. On the street. In the water. All over the place. Manta snatches the Globe from Ya’wara, and teleports himself to Shin’s.

During all of this, Mera is treated to a story of Arthur’s history with Manta. Following Thomas Curry’s death, Arthur went after Manta on the high seas. He boards his boat and kills the captain. Turns out, that’s not Manta, but Manta’s father – thus perpetuating the endless cycle of vengeance between the two men.

Wow, this issue chock full of emotional characters. It was beautifully depicted in Reis’ art. Between Arthur’s rage, Black Manta’s usual stoicism (zing!), Ya’wara grittiness, the Prisoner’s emo/suicidal moodiness, and the Operative’s confident thousand-yard stare, this book could start it’s own collective of Lanterns. Each character is given additional depth in this issue that either will add more as this story goes on, and/or continues trends that have been building for several issues.

The most interesting, and mysterious addition to this issue is the Operative. First of all, I really like that he is old. It shows his commitment to his craft, and his commitment to doing what is right. Just as he himself says, 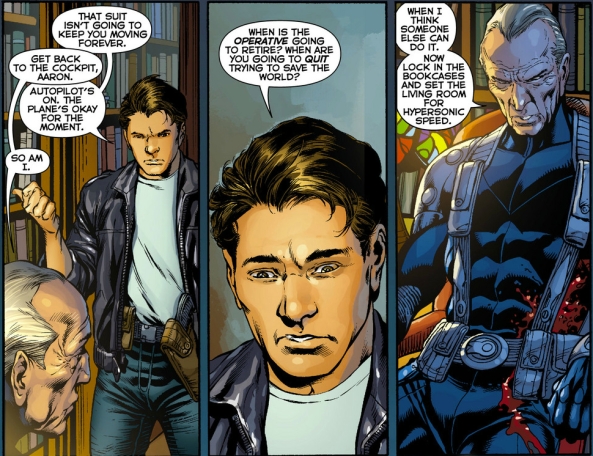 This really speaks to his character, and hopefully will guide how he will behave in this book. Side note, I love that the suit is what keeps him moving, but also will gives him a vice; without the suit, his body is shot to hell. His relationship with his son is a good dynamic, but I don’t really see that playing a major role in this story.

We learn more about Arthur and Black Manta’s past in this issue. In fact, it even gets more confusing, but it also begins to make more sense in some aspects. Assuming that all of Aquaman’s history is true, this says all kinds of things about their relationship. Shin describes it as an endless cycle, which is so true. I mean, Black Manta did kill Aquaman and Mera’s BABY! Also, it makes sense that, despite his hero-ing and assumed moral code involved with that, he is still willing to kill Black Manta.

We also see more character development for Arthur. While he is fighting Manta, he acts more like he is depicted back when he was first with the Others – that petulant machismo asshole – than as the noble loner depicted in earlier issues. Also, when he kills Manta’s father there is that look on his face that really just gets me. It’s that mix of sadness and surprise, and extreme remorse. This issue also shows that he can have more mood swings than a pregnant woman. These two frames, beautifully done by Reis, show that. 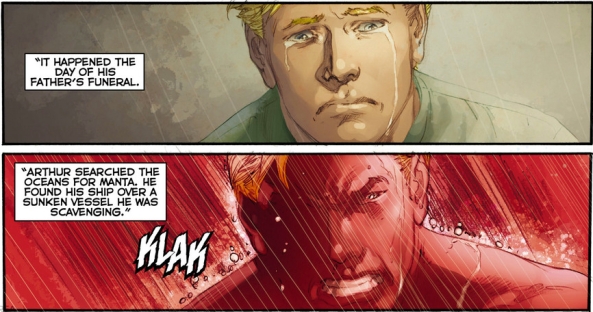 The way Arthur’s body doesn’t move at all between panels brings out the facial expressions more. Without the extra motion, it eliminates that distraction, allowing the reader to focus on the face. Speaking of that, WHAT DID THOMAS CURRY SAY TO ARTHUR!?!? That will probably come back at some out. I could see that being some nice sentiment about his character that he has chosen to ignore, and it will hit him later at a key moment. (Maybe he’ll stop himself from killing someone with that memory.)

This issue is the next piece to a terrific storyline. This book has really hit it’s stride across the board and I love it. Johns’ revitalized Aquaman is making waves in the comic book world, both in sales and on the outside, as well as Arthur is playing important roles here in this book and in Justice League.

That crack he made about Vibe in Justice League made my day too. We’ll probably see him pop up sooner or later, especially since he was in that awesome two page fold in the Free Comic Book Day comic.

Shelby: Ah, the art in this book. On the one hand, you’ve got those beautiful panels of flashback within a flashback: the red Manta-vision when Arthur killed Manta’s father vs. the soft and painterly treatment of all the Thomas Curry flashbacks. On the other hand, though…

The boobs, the abs, the angryface: it’s all so ridiculous. I know I say it every time, but I just can’t help it.

Overall, though, I was pretty pleased with this whole issue. You were dead on about Old Operative being pleasing. I think it’s just because you NEVER see an old superhero running around, unless your reading The Dark Knight Returns or something like that. I do like seeing the whole gang together again (almost, since we’re still waiting on Vostok), but they seem like a pretty crappy team so far. Aquaman gets mad, even madder than Ya’wara who just makes fun of Prisoner (?), who just wants to eliminate collateral damage. It is exciting to see Manta take Ya’wara’s little Atlantis trinket. Even though he was doing a fine enough job of getting around as it was, I definitely had a “oh no, now he can go ANYWHERE!” reaction.

I was also happy to find out that Arthur had not set out to murder Manta’s father in vengeful rage. True, it would have been very, very interesting to turn Aquaman into the villain in his own story, but it just seems like too big of a character leap. It’s a safer choice, having Arthur accidentally kill Manta’s father, and ultimately I think it’s a good choice. Also, did you see how Arthur snapped that guy’s neck with one hand? I mean, seriously, that is badass.

So, now Manta has a fairly tidy collection of magic Atlantean artifacts (purpose: unknown), and is hell-bent on destroying everything Arthur holds dear. The dearest thing Arthur has left to him is obviously Mera. The $64,000 question: will Geoff Johns kill off Mera? More importantly, how would you all feel about it if he did?