Today, Drew and Peter are discussing Nightwing 8, originally released April 18th, 2012. This issue is part of the Night of the Owls crossover event. Click here for complete NotO coverage.

Drew: Scott Snyder has said that, for Batman, the Night of the Owls is all about his relationship to Gotham. That singular focus on a theme so close to Bruce’s identity can be felt throughout that title, and all of our favorite books have a similar thematic focus; Wonder Woman on family, The Flash on time, etc. While these themes all focus on aspects of their heroes’ identities, Kyle Higgins has managed to refract the events of the Night of the Owls onto identity itself, Nightwing’s own pet theme. Last month’s reveal that Dick had been earmarked (okay, toothmarked) to be the next Talon struck a powerful blow to his sense of self, which was still on the mend from his recent costume changes (plus the inherent issues of being a kind of unmoored twenty-something).

When we first meet up with Dick, he’s investigating a double homicide where one of his Escrima sticks was found. Dealing with an imposter and/or frame job can’t help his identity issues, but there’s no time to dwell: the Night of the Owls is upon us! Dick gets the message from Alfred, and decides to head to City Hall to protect Mayor Hady (he leaves Gordon at the GCPD, figuring the police can keep him safe). He shows up in the nick of time (though too late for a City Councilman and a few security guards). He manages to defeat the Talon, jamming an Escrima stick THROUGH HIS EYE. Just when it looks like the fight is over, William Cobb (apparently revived by the Talons that discovered him in the Batcave) shows up and hits him with a few throwing knives.

That story is nestled in with William’s own origin story, detailing his recruitment to Haly’s Circus, as well as the courtship of Amelia Crowne — Dick’s great grandmother. Amelia also introduces us (I think) to a new Gotham family: the Crownes, listed alongside the Waynes, Cobblepots, and Elliots as one of the most influential families in Gotham. It’s not clear how her child ended up back with Haly’s, but the indication that he (or she) may have been conceived and born out of wedlock could explain it. Er, I should say that I’m assuming she’s Dick’s great grandmother — there’s no indication that she’s pregnant, just that she and William fell in love and engaged in some naked bed snuggles (though maybe I can be forgiven for reading into that detail).

We’re clearly going to get more of that story next month, but what we do see is rich with detail. We’ve been hot and cold on Eddy Barrows’s layout experimentation, but it works beautifully here as panels float like William’s juggling balls, or fly and fracture as Dick smashes through a window. His faces are clear and expressive, and he captures the awestruck joy of a circus audience with a keen eye for detail. My favorite moment, though, has to be the callback to Batman 1. Remember that John Doe found pinned to the wall with throwing knives? Is it any coincidence that the person who threw those knives also threw these?

The richness of detail extends to the writing as well. I’m particularly interested in the debate that was going on in the Mayor’s Office before the Talon showed up. Hady seemed to be colluding with the Deputy Mayor and a Councilman to ram a redistricting plan through the City Council to redistrict portions of Gotham to block Bruce’s development plans. Why the Mayor would be so opposed to Bruce’s plans is one question, but another is why the Owls are then coming for him. We’d assumed that first Talon was sent for Bruce in order to stop his building project, but if they’re also killing the other people trying to stop it, I’m not totally sure what their angle is. This may simply belie a history of corruption, but it’s interesting that this particular example seems to put Mayor Hady on the side of the Owls. It suggests that getting what they want is no longer about building or not building, but a full-scale takeover (or destruction) of Gotham. We were shown so much at the end of Batman 7, but it’s interesting to see it in action.

The details don’t stop there. We’re actually introduced to Amelia long before William meets her — she’s the girl on the street playing with her dolls. I also can’t help but see these guys as Bizarro Laurel and Hardy: 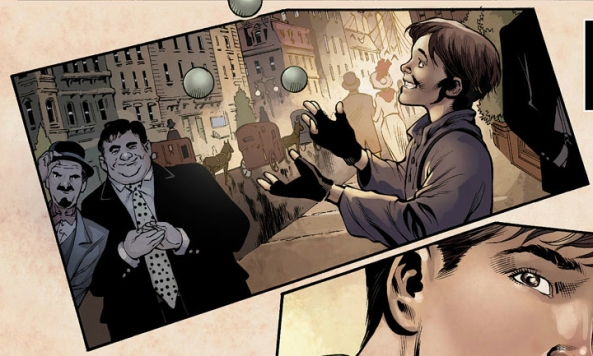 Colorist Rod Reis treats all of the flashbacks with that same kind of sepia wash, which adds a warm old-timeyness to the proceedings, and stands in sharp contrast to the splashes of red that permeate the modern-day sequences. It’s a simple trick, but an effective one. My only complaint is that I can’t tell if Amelia is a redhead (the freckles indicate yes). It’s certainly not an important detail, but I can’t help but wonder if that particular predilection runs in the family.

Richness of detail aside, this issue truly is about identity and what defines us. It’s telling that Hady is pressing the Deputy Mayor for allegiance; our actions and our loyalties help define us. The Talon lists “betrayal of Gotham” as Hady’s crimes, and William accuses Dick of being “Gotham’s worst betrayer of all.” We still don’t know exactly what that means, but we do know where Dick’s loyalties lie. Perhaps his identity isn’t so fragile after all.

Peter: I really like how Higgins has taken this to a incredibly personal level for Dick. Out of all the Bat-Family members, Dick is probably the closest and most affected by the Night of Owls. With the startling realization that he could easily have been on the other side of these has obviously shaken him to the core.

A lot of the commentary presented by William Cobb during his backstory is about social status: the differences between being a child in Gotham, vs being a child of Gotham. William starts out as a poor child in Gotham, while Dick becomes a child of Gotham after being taken in by Bruce. This, in addition to everything else that happens, I think will play a role in Dick’s current and future self examination, as well as some strife between him and William.

Do you think that Dick’s ‘worst betrayal’ is to Gotham, by way of his not being a Talon? As in, since he was taken in by Bruce, and not becoming a Talon is he betraying Gotham by not joining the Court and protecting the city with the Owls? It also could be a betrayal of family, since William makes a clear  point naming the four most powerful families in Gotham. This probably depends on the relationship between the four names mentioned, Wayne, Cobblepot, Elliot and Crowne and their relationship with the Court. This could then lead to some pretty awesome revelations about the history of the Court and who makes up their ranks.

I love the art in this issue. Between the art, and the paneling, this issue is really electric and has a great sense of forward movement. I especially love how the Talon blends in with the shadows, like William did in earlier issues of Batman, leaving just the eyes and beak visible. It really is a striking image, and I would easily be scared of it in real life. Oh, and Hady totally deserves this for plotting against Bruce Wayne’s development project. 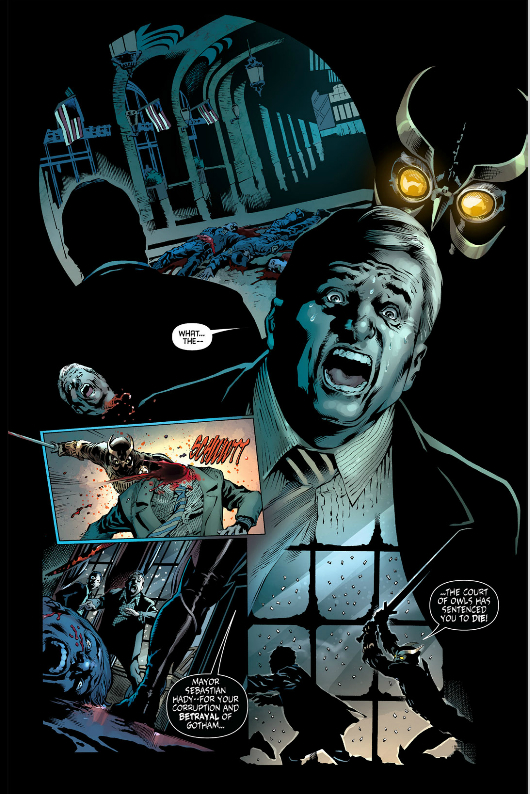 I really hope that we see the William Cobb story continued. Cobb’s step-by-step journey from  knife-thrower, to a Talon for the Court of Owls was exactly what this story needed. But I’m most intrigued by the rest of the process: that bit we were given a taste of in earlier Nightwing with Saiko. The history nerd in me is loving the Cobb story, and I sincerely hope that it will continue.

Nightwing has been one of my favorite books, and I expect it to shine during the Night of Owls. Like many of the books of the New 52, it takes a very personal and introspective look at the DC Universe. I hope that it continues to perform at the level that it has been.

Also, remember that time Dick stabbed a Talon in the eyes with a blunt object?