Scott:  This Rotworld stuff can be pretty depressing. I can only take so much of hearing about how everyone everywhere is dead and there’s nothing anyone can do to make things better. So it’s nice that Swamp Thing Annual #1 was able to take a step back and tell a story that, while still wholly depressing in its own right, feels like a breather from the current state of Rotworld despair.

The issue begins with Swamp Thing, who is now huge, refusing to believe that Abby is dead — he can feel her presence. But maybe what he thinks he feels is actually an old memory that has been taken from him. The Parliament reveal to Alec that, many years ago, he traveled to the Carpathian Mountains at the invitation of Anton Arcane, to attempt to restore plant life to the barren soil. While waiting to be introduced to Arcane, Alec observes a strange flower and runs into Abby Arcane. Alec and Abby hit it off fast, although Abby strangely has trouble recalling much of her own past. They share a kiss and Alec dumps some foxglove seeds into the river before heading in to take a closer look at the strange flower, which is even stranger than he originally thought. Arcane finally makes his entrance, telling Alec that it is a flower of rot, and it will rot his brain, destroying his memory as it has done to Abby’s. Just as Arcane is preparing to kill Alec, the foxglove seeds grow into a giant swamp thing, which manages to fend off Arcane long enough to get Alec safely away. Back in the present, Swamp Thing vows revenge on Anton Arcane.

Aside from the framing device set in the present, this entire issue takes place many years in the past. It almost feels like this is some alternative zero issue, meant to apply only to the Rotworld arc. Co-writers Scott Snyder and Scott Tuft (cool names!) did a good job setting up the relationship between Alec and Abby. It’s easy for love-at-first-sight stories to come off as cheesy or too dry, but there was enough substance here that I could believe it. What I can’t figure out though, is if Alec doesn’t remember any of this happening, does that mean he doesn’t remember meeting Abby? He hasn’t shut up about her since returning from fighting the rot in Swamp Thing #13, and he was very upset to learn she died, so obviously he does remember her, but this issue seems to suggest he perhaps shouldn’t even know who she is. It could just be that this is all explained somewhere and I’m totally missing it. I’m sure you’ll let me know.

With most of the story centering around pre-Swamp Thing Alec and set in the mountains, there wasn’t much opportunity for cool Swampy imagery, but artist Becky Cloonan did well with what she had to work with. I found the stuff with Anton Arcane to be especially terrifying thanks to her art. It’s fitting, I suppose, that this issue came out on Halloween. Arcane’s first appearance — chopping up a dead body and putting on the flesh like a jacket — is like something out of a horror film. That he refers to this process as “Getting dressed” makes it even more unsettling.

I really liked the image of the skull in the side of the stone wall that Alec and Abby are standing over as they talk about being humbled by nature. It may be an obvious way of  reinforcing the idea of being a part of the cycle of life and death, but it’s also a more subtle of showing how death is hiding everywhere in this town. 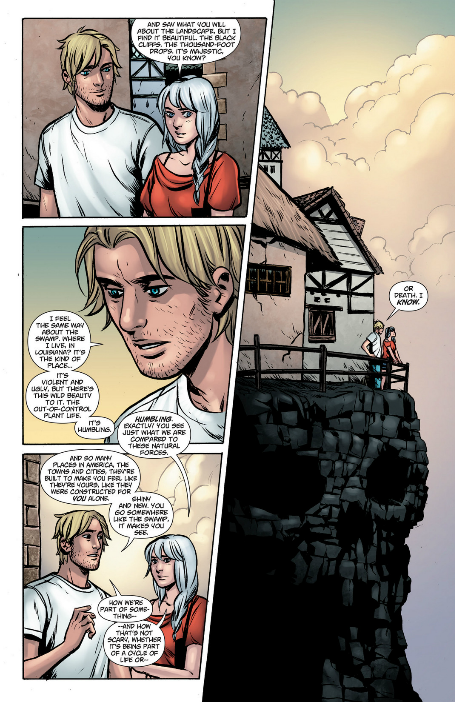 Abby mentioned in the last issue how there is something rotten “tucked deep in the rocks.” I can’t say for sure that this was intended as a callback to that line, but that’s what immediately came to my mind. I’ll credit the creative team for their thematic consistency.

The primary purpose of this issue was to fuel Alec’s desire for revenge against Anton Arcane, and a showdown between those two is certainly looming. However, Rotworld is a lot bigger than just Swamp Thing, so don’t be surprised if there a few issues of Alec getting mad about other things before we get the big payoff. Also, if I remember correctly, we never actually see Abby die, so it wouldn’t surprise me to see her alive again sometime soon. I can’t imagine her storyline is finished, but I also don’t know how they’ll be able keep bringing her back unless she managed to walk away from that apparent plane wreck in decent shape. She’s gotta be alive, right? Rotworld’s a pretty depressing place, but I still have some hope.

Patrick: And hope is exactly the currency this issue deals in. While the rest of this event (and arguably the rest of Scott Snyder’s run on Swamp Thing) revolves around the DEATH OF ALL THINGS, the annual offers something more: a in-narrative reason that death would be so bad. Now, it’s not really like anyone needs to make the case that wiping out all life on earth would be bad. Right? That’s kind of a foregone conclusion.  But the scenario set-up by Rotworld is so mind-bogglingly huge that a) there’s no way to emotionally contextualize it and b) we’re sort of expecting it to be magically reversed by the end anyway. So Alec’s personal connection to Abby is going to be everything; it has to be.

Which is a pretty interesting, if enormous, character flaw For Alec. We’ve known other swamp things to take their solemn duty to the Green seriously, but Alec — regardless of how much poking and prodding delivered by Parliament of Trees — resists the transformation until Abby’s life is threatened. Like the readers, global extension feels less urgent than one cute girl in trouble.

And much as I’ve grown accustomed to Yanick Paquette and Marco Rudy’s art, Becky Cloonan is the perfect artist to deliver on the promise of “one cute girl.” Her style has that slightly anime-ish roundness to the characters that makes everyone appear a little bit younger and not nearly so world-weary. It was absolutely necessary that such a strong departure in the tone of the story was accompanied with Cloonan’s art. With her work here and in Batman #12, it’s like she’s cornering the market on the surprisingly intimate looks behind the dark-dark stories of the DC universe. She may eschew the series’ trademark ambitious layouts for more straightforward visual storytelling, but find me another artist that can land this meeting:

Now, never mind the baroque details of the plants, and never mind the dynamic lighting effects: the attitude of this drawing is 100% Abby Arcane, just modified slightly to match her youthful optimism. That’s someone worth fighting for.

Oh, on that note: Alec just doesn’t remember this encounter with the Arcanes. All of the preceding 12 issues of Swamp Thing — wherein he meets, falls in love with and fights to protect Abby — are all fair play.

Scott, I had totally forgotten about why Abby was on that plane in the first place! She’s searching for something – you posit that the skull in the rocks is a reminder of this, but maybe it’s The Flower itself. We don’t know much about that thing, other than it looks like it’s alive, but it technically isn’t (and it barfs up chlorophyll when you try to bond it with a real plant). So, maybe this thing has the ability to bridge the gaps between the Green and the Rot. Or maybe she wants to use the chemical forgetty properties for some purpose. Or hell, maybe she just wanted to reconnect with her childhood home before being plunged into a lifeless apocalypse.

I also appreciate that this issue spent a little time trying to make death just as beautiful a part of the cycle as life. You can have characters tell me that all three — the Red, the Green and the Rot — need to exist in a balance, but as long as Rot characters are exclusively decaying monsters that murder everything, that’s a tough sell. Abby volunteers at the hospice, which means that she gets to help people achieve moments of peace in death – in fact every piece of her town’s history revolves around a lot of people dying. It’s great to see a concept like this — death can be beautiful — demonstrated, rather than explained.

And for those of you that that your Swamp Thing fuggin’ action-packed, we got another issue coming out in like five days. Now, Alec’s got a reason to be pissed. Game on.