Patrick: What is the first thing you do when you pick up your copy of Batman Damned #1? You’ve got fifty pages of stunning Lee Bermejo art on oversized, oddly-shapped pages, and a script from the legendary Brian Azzarello. It’s a mature, confident riff on Batman and crime and dark magic, but you eagerly thumb through that intrigue and drama and blah blah blah until you find the panel where you can sorta see Batman’s dick. Can you spot it without someone else increasing the contrast and circling it? It’s a rush — a taboo look at Bruce Wayne’s dong flopping lazily to right. And now, because you have this comic in your hands, you’re one of the people that saw it first hand.

It is a quintessential “made you look” moment. Bermejo and Azzarello have such command over the readers’ eye that they are able to direct us to one specific panel before we’ve even considered buying the book. Once this masterpiece is in your hands, you discover that it’s all about misdirection, slight of hand, and controlling what the reader sees and when they see it. END_OF_DOCUMENT_TOKEN_TO_BE_REPLACED

While the concept of a ghost investigating its own murder is pretty straightforward, there’s something of an incongruous cognitive leap we need to make to buy into it. Specifically, if there’s a consciousness around to investigate its own murder, is that person really dead? It’s a circular logic question, and one that ultimately isn’t super fruitful — either we buy in to the premise of the story or we don’t. But that tension still hangs over the proceedings in Deadman 1, and creator Neal Adams leans into that emotional confusion hard, breaking down every page and every story beat into a whirling WTF mess of plot twists and body swaps. END_OF_DOCUMENT_TOKEN_TO_BE_REPLACED 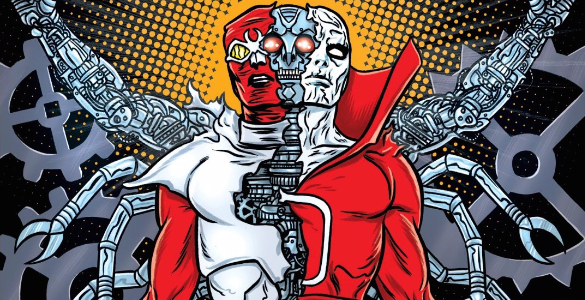 Dense mythologies are both the greatest strength and weakness of modern comics. We could spend ages parsing out how the major companies have approached those mythologies in recent years, but all of those broader approaches are largely irrelevant when talking about Bug! The Adventures of Forager, which continues to march to the beat of its own drum. It’s attitude is deeply reverent of Jack Kirby’s contributions to the DC mythos, systematically touching on each forgotten storyline from his time there, while somehow also taking a completely irreverent “don’t sweat the small stuff” approach to the material. Completist Kirby fans will recognize every situation Forager encounters, but newcomers (like me) are left largely in the shoes of Forager, who mostly sees all of this stuff as kooky weirdness. It’s a balance that shouldn’t work nearly as well as it does, somehow knitting all of this kooky weirdness into the dense mythology it always was. END_OF_DOCUMENT_TOKEN_TO_BE_REPLACED

Spencer: Patrick and I recently lamented a certain style of comic, the kind that tries to recap an entire lifetime with voiceover, practically becoming an illustrated Wikipedia article in the process. It seems as if the entire purpose of these comics is simply to relay information without attempting to further characterization or plot, and the longer I read comics the more this kind of story bothers me. This particular style seems to pop up most often when retelling origin stories (just check out our Zero Month coverage for proof), and that made me particularly cautious about picking up Secret Origins 6. Each of the three stories presented in this issue tackles the business of telling an origin story slightly differently, yet two of them still stick pretty close to this format. I suppose that raises the question of who this title is actually for: newbies who may need an illustrated Wikipedia article, or long-time readers who might expect a little more from their stories? END_OF_DOCUMENT_TOKEN_TO_BE_REPLACED

Drew: I have a friend who used to love Law and Order — er, he liked it as much as a person can really like an episodic primetime drama — the point is, he was happy to tune in every week to see how the team handles the new case. That is, until his son pointed out to him how formulaic the show really is — right down to when in the episode they’ll nab the wrong suspect, find that key clue, or offer a plea bargain. It ruined the show for him — knowing what would happen next robbed every development of any drama, so he just stopped watching it. In some way, we all have this same experience with storytelling in general: the more stories we consume, and the more familiar with common formulas we become, the better we are at predicting what happens next. We recognize foreshadowing, we notice if we’re being intentionally misled — we just become harder to fool. Many of us are willing to put that aside to suspend our disbelief that maybe the hero won’t make it out this time, or maybe the lead couple won’t end up together, after all, but sometimes a writer still wants to surprise us. This often requires going into DEEP left field, which can make the resulting developments feel arbitrary, or even nonsensical. Unfortunately, those are the kinds of final act reveals we get in Flash 29.

END_OF_DOCUMENT_TOKEN_TO_BE_REPLACED

Scott: As a kid, I didn’t enjoy ghost stories very much. I did my best to avoid them, but sometimes, late at night at a slumber party or around a campfire, it was impossible. I endured; listening wasn’t the hard part. In the moment, whatever shock or gore the stories contained didn’t affect me much. It was the aftermath, the lingering psychological torment — the fear, however irrational, that maybe the deranged killers they told these stories about might actually exist. In The Flash 28, Barry Allen is confronted with my greatest fear: the murderous monster from his childhood ghost story is real. A ghost story combined with a detective story, this issue is as fun as you can imagine, even though all of the elements don’t mix together quite right.
END_OF_DOCUMENT_TOKEN_TO_BE_REPLACED

“Does it have a happy ending?”

Greg: Whenever I recommend a movie to my dad, or tell him I’m working on a new project, this is his first question. He’s a high school assistant principal and deals with a lot of heavy stuff. At family dinners, when my mom would ask him how his day was, he would often just sigh. He wants his entertainment to provide respite and closure he doesn’t often get in real life. He’s a man who, at the end of Inception, stood up in his seat and yelled at the screen, “What?!”

I’d like to think I’m more open to the darker stuff than him. Yet while reading this black and white anthology series, I felt my gut stiffen and sour. I felt like I was being shown evil things for evil things’ sake. I wanted to stand up in my seat and yell at my comic book, “What?!”

END_OF_DOCUMENT_TOKEN_TO_BE_REPLACED

Mikyzptlk: Event comics are…strange. As Drew mentioned in his previous coverage of Trinity War, event comics like these can be hard to pin down. There’s usually a ton of damage and more colorfully clad heroes than you can shake a superpowered stick at. At the same time though, with so much going on, it can be hard to get to any meaningful characterization. It’s not impossible, but there’s just usually not that much of it. Another thing that event comics like Trinity War are known for is the idea that “Things Will Never Be The Same” after the events of said comics. In the end, what we normally get in event comics are shallow, action packed adventures that drastically change the playing field for our heroes. I’m not saying that’s a bad thing, in fact, I think it’s kind of necessary. The ever-changing playing field helps to keep these decades old characters fresh, and help to prime our heroes for those character-rich solo stories we all love so much. While Trinity War has given us some interesting moments, I can’t help but feel impatient for the drastic changes it will bring. The penultimate chapter of the tale helps to reinforce that feeling.  END_OF_DOCUMENT_TOKEN_TO_BE_REPLACED

Drew: Determining a level of focus is perhaps the most important step in evaluating a work of art. These foci are specific to the style at hand — harmonic analysis is likely going to tell you very little about a rap song, just as an examination of brush strokes wouldn’t add much to a discussion of da Vinci. Intriguingly, these styles often begin to resemble each other as you zoom in and out — abstract paintings may share concepts of form, color, or composition with those of the Rennaisance masters, for example — further increasing the importance focus in an analysis. Geoff Johns has always written “big” — he’s been at the helm (or at least sharing the helm) of some of DC’s most important events over the past decade — and his writing has often chafed at the analyses of his critics. Justice League of America 7 actually avoids many of the pitfalls Johns is often cited for (a lot of stuff actually happens here), but it still has me wondering if we’re simply using the wrong tool for the job of evaluating a giant, Geoff Johns-penned event.

END_OF_DOCUMENT_TOKEN_TO_BE_REPLACED

Mikyzptlk: When Patrick covered issue 10 of this title, he brought up the movie What Dreams May Come. Okay, I know it’s not everyone’s favorite, but you’ve got to admit that it has it’s moments. I’m a fan of the movie myself, especially early on when we are first introduced to the concept of Heaven and its inner workings. Essentially, when you die you create your own Heaven. We get a similar description of Heaven’s mechanics in Phantom Stranger 11, which gives us a chance to peek into some of our character’s innermost desires. What happens, though, when all that is left for your main character to desire flies in the face of a Heavenly decree? Nothing good, surprisingly enough.  END_OF_DOCUMENT_TOKEN_TO_BE_REPLACED