Patrick: It was great being a kid in 1990 and loving the Teenage Mutant Ninja Turtles. Since that time, however, can’t exactly say my love has been rewarded. That is, until I picked up IDW’s current run of the comic books. These are the TMNT rejuvenated, refreshed, and stripped of everything that made my affections wane in the first place.

I encourage everyone to read the first 12 issues (and the 5 mirco-series that company them) — because they’re great — but if you want to hop in mid-stream, issue 13 is a welcoming place to do that. And in the spirit of jumping-in-mid-stream, here’s some quick background:

The Ninja Turtles (and their master, Splinter) are the result of both intentional experiments and accidental experiments at Stockgen Labs. During the accidental part of their creation, a stray alley cat named Hob was also transformed into an able-bodied mutant, and he was recruited by Stockgen CEO Baxter Stockman to apprehend and/or kill the turtles. Stockman is bullied into this action by the mysterious General Krang. But the turtles are quick to make friends to help them face this threat: there’s April O’Neil, a college student who was interning at Stockgen at the time of the accident; Casey Jones, a college athlete who’s home-life (and penchant for vigilante justice) keeps him from succeeding at school; and Angel, leader of the Purple Dragons (which is maybe a gang… but also maybe ninjas… it’s not totally clear). As they fend of one threat, another emerges in the form of The Foot Clan (more ninjas) lead by The Shredder, with his granddaughter Karai at his right hand. But it quickly becomes clear that both Stockgen and The Foot Clan are interested in the same thing: capturing the Turtles to replicate that mutation success. There’s one more level of weirdness here: Splinter believes himself to be the reincarnation of ancient Japanese warrior Himato Yoshi, and the Turtles to be the reincarnation of Yoshi’s four sons. All of whom were executed by Oroku Saki, who just so happens to be this Shredder guy. How exactly Saki is still alive (or alive again) remains a mystery.

Okay, that’s enough context – on to the issues at hand:

After a particularly violent outburst from his abusive father, Casey leaves his home for good. The Turtles are more than happy to take him in, but Raph flies off the fucking handle, and storms off to Casey’s old man’s house, ready to kick his ass into oblivion. Splinter intervenes, with a strange teachable moment: he holds a knife Papa Jones’ throat and asks Raphael whether killing him would make any difference. Splinter’s point is revealed back at the Turtle hideout, when he gathers the extended family (Turtles plus Casey and April) to tell them that they must take seriously his mandate to kill The Shredder. The Turtles aren’t totally sure how to respond to such a mandate – Donny blows it off with jokes, but Mike’s genuinely upset that their father is asking them to murder someone. But the turtles have other business: find a new place to live. One potential place is a four-story bomb shelter under an abandoned church (cool). When they go to scout it out, however, they’re attached by a monster that’s been terrorizing New York for a couple days — another mutant turtle from Stockgen, nicknamed Slash.

Their encounter with this monster-turtle is the highlight of this story arc for me. They’re four-stories underground, it’s pitch dark and Michelangelo is anything but reliable with that damn flashlight. The result is chaotic sequence that plays out like a horror movie as the turtles are defeated one at a time. 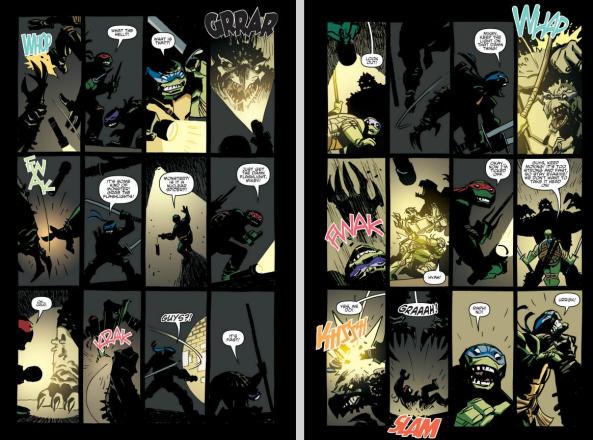 This series deals so much in insane storytelling that it’s nice when artist Andy Kuhn is able to just land something simple like this terrifying action scene.

Actually, on the subject of insane storytelling: there is a lot of it in issue 14. While the series previously tip-toed around the idea of Krang and his stone soldiers, writers Kevin Eastman and Tom Waltz gleefully pull back the curtain on the extent of the sci-fi craziness that’s happening here. No sooner does Krang reveal himself to be a little brain-alien in the chest of a giant robot than he also shows off the last remaining brain-aliens (heretofore referred to as “Utroms”) and the plight of their homeworld in Dimension X. This franchise is always a balancing act between three primary pillars: 1) superhero-style action; 2) mystical ninja stuff; and 3) sci-fi wackiness. I’ll admit that the third pillar is my least favorite, so I get a little bit weary when I see something like this. 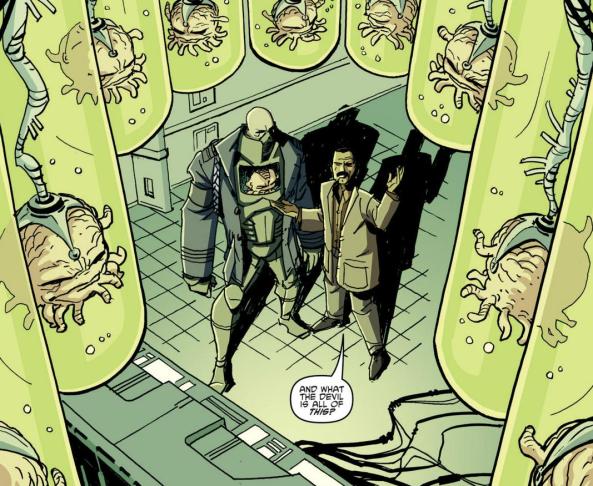 Luckily, the vast majority of these issues deal in the relationships between the characters, and the inter-dimensional conflict between aliens is treated as background. The other HUGE REVEAL in issue 14 is that Shredder wants to recruit Leonardo to lead the Foot Clan. He refers to him as his “true heir.” Now, the text doesn’t suggest that Saki means this literally, but it wouldn’t be out of the question for one of Yoshi’s original sons to actually be the son of Oroku Saki. Regardless, there is something ruthless that Saki sees in him, and it’s no secret that Leo’s seriousness makes him something of an outsider among his more laid-back brothers. He’s so loyal to Splinter, so I don’t see how this could happen, but I really hope Leo is genuinely tempted to join the Foot.

Taylor, I know you enjoyed the early run of this series, but part of that was due to the inspired character of Hob (who barely appears here at all) and gradual assemblage of a fresh take on this mythology. Now that we’ve settled in and actual work of storytelling is at hand, do you find any of it too weird to hold on to? Or maybe I’m way off base and you just want to read more about Dimension X?

Taylor: To be honest, Patrick, I haven’t found anything in this title to be too far out, but I think this is partially due to my familiarity with the TMNT universe and the giddiness I feel when I encounter something I recognize from my youth. Like you, I’m a bit weary of the more sci-fi elements of the plot so far but I think this is mostly due to their remoteness from the primary plot and characters. At this point in the series there is hardly any connection between the plot involving the turtles and the Shredder and the plot involving Baxter Stockman, Krang, and Dimension X. I have no doubt these will collide at some point but I also wonder how well they will come together. It seems likely that the Shredder and Krang will team up as they did in the cartoon of our youth but seeing these particular incantations of these characters come together still seems really weird to me at this point. Regardless, the weird sci-fi plot elements are only sprinkled into the turtle soup here and there so when they do come they only serve to excite me. I can’t explain to you how happy I was to see the Technodrome make an appearance in one of these odd, little digressions. One the one hand, the Technodrome doesn’t seem to fit into this universe all that well, but on the other it’s just like the series I loved so I can’t help but be excited by it’s introduction. It even looks like the underground battleship we have locked away in our memories, making it all the sweeter.

Patrick, you also mentioned how most of the these issues deal with the interpersonal relationships among the turtles, their human friends, and, most importantly, Splinter. I’ve been really pleased with the treatment the Splinter character has been given in this series and the way he relates to the rest of the characters. In most TMNT renditions splinter is the wise master of the turtles but not much more; he raised them, trained them, and is a father figure to them, but that is really all the depth the character had. Splinter normally serves as a convenient explanation for why the turtles are schooled in the way of the ninja but besides that he is an afterthought. Conversely, in this latest edition of the turtle story Splinter is a well rounded character who actually moves the plot forward in more ways than one. The argument could be made that there would be no plot whatsoever if it weren’t for Splinter and his centuries old feud with Oroku Saki but this isn’t the only influence he has on the story. When Raphael runs out to beat up Casey’s dad one would expect Leonardo to chase after him since this is the narrative we are used to when it comes to TMNT. But in this series Splinter is the one to do it because aside from being a rat of thought, he is a rat of action. His confrontation with Raphael gives us insight into his own dark past and further establishes his role as mentor, and more importantly, father figure. He also adopts Casey, an action which warms my heart and establishes him as my favorite character of the series. Those two being domestic together is simply awesome.

Speaking of Casey, I have to admit that I wasn’t a fan of him or his story at the beginning of the series. I thought the narrative of his drunk and abusive father was a little tired and lacked any real emotional depth since it was barely revisited after its initial introduction. It sounds weird to say, but I’m glad it was reintroduced in issues 13 and 14 because it helps develop Casey Jones as a character while also managing to convey an important message. Having Casey become part of the turtle family allows us to see his vulnerability and also reminds us that despite all his ass-kicking ways, Casey is still a kid who still hasn’t made sense of the world. The subtle message that a person should seek help from friends if they are being abused pleasantly surprised me as it is not often you see such practical and good advice handed out in comics. Seeing Casey, a character who has every reason to be bad, retain his goodness is immensely gratifying and I look forward to seeing how he will flourish under Splinter’s tutelage.

And ultimately this speaks to why I like this title so much. I care about these characters and I want to see what happens to them. While I appreciate all the other weird stuff going on around them and think it will make for a good story, what keeps me coming back is my desire to hang out with the characters a genuinely like.