Patrick: When last we saw crazy ol’ Jeb Stuart and his Magical Haunted Tank, they had appeared in a cave in Afghanistan to rescue his great-grandson, Scotty, who had been captured by Taliban rangers. Unfortunately, the Haunted Tank is only interested in rescuing Scotty and his two compatriots are shit out of luck: they’re shot, killed and dumped in a river so the Magical Tank can whisk them off to their next adventure. Naturally, that means teleporting to the North Pole and unearthing a Damn Nazi War Wheel.

We also get some background on the tank itself. Jeb believes it to be the ghost of a Confederate General, called simply “General.” The Tank and its operating crew of WWII soldiers fought off all that occultist Nazi bullshit you can learn about by watching the “History” channel (alternately: by watching Indiana Jones). With memories of giant killer vikings and pegasus-riding amazon warrior women fresh its mind, the tank has little patience for the kind of everyday war-problems like POWs in a cave in Afghanistan.

I know the characters fight about it within the narrative, but Scotty doesn’t put up nearly enough of a stink for my tastes. He just lost two of his fellow soldiers, the rest of the platoon is certainly looking for him in those same hills. He has vital intelligence that NEEDS to be reported back to command. And Jeb and the Tank should understand and respect that — being life-long (and afterlife-long) soldiers. Honestly, the treatment of the living, present-day soldiers is enough to make me dismiss everything else in the issue as nonsense. Not even the tease that many of the treasures of the Black Room (or Red Room, depending on what you’re reading) came from Hitler’s personal collection was enough to wash that icky taste from my mouth. 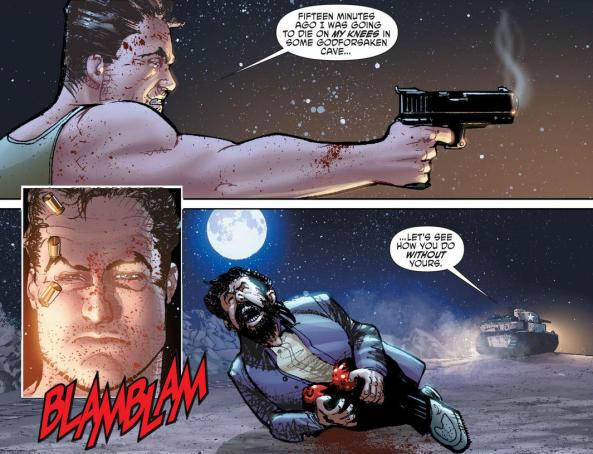 He’s got training on desert warfare and on fighting this specific enemy, plus a long family tradition of service — there’s no way he would sully that tradition or the reputation of the US Army with a revenge-maiming. It all feels like Peter Tomasi just wanted to tell a story about Nazi Metal Men and Damn War Wheels and the hell with everything else. Which would be fine if so much of this story didn’t take place in a real warzone.

So what do you think, Drew? Am I letting my hang-ups here distract me from a story that’s otherwise worthwhile?

Drew: Nope — I think you’re exactly right here, Patrick. It’s one thing for Tomasi to be so keen on getting to (and explaining) the Nazi magic that he doesn’t adequately explain how Scott was convinced to come along for the ride, but I really can’t understand why the small explanation we get would feature him being such a vindictive monster. For a soldier that’s seen as much action as Scott, you’d think he wouldn’t take people trying to kill him so personally, leaving me to conclude that he’s actually a psychopath. Yes, these are bad guys, but even they were going to shoot Scott and his compatriots in the head, not shoot out their kneecaps and leave them for dead. It makes the US soldiers come off as the monsters here, to such a degree that I can’t help but wonder if that was Tomasi’s point.

Tomasi certainly has a lot of evidence that some US soldiers have committed some pretty monstrous crimes after being pushed beyond their breaking point, from the abuses at Abu Ghraib to Robert Bales killing 16 unarmed civilians in the Kandahar massacre, but without any sympathy for the soldiers perpetrating these acts, the message stops being “war is horrible,” and starts becoming “US soldiers are horrible,” which strikes me as a shitty, shitty message to release just before veterans day.

Don’t get me wrong — war is horrible, and I believe artists have a duty to represent it as such, but Tomasi isn’t making “war” the villain of this story, or even the men Scott is fighting against; he’s making Scott the villain of this story. Sure, we eventually get to Nazis (every storyteller’s go-to when they want an unambiguously evil villain), but the portrait of US soldiers involved in actual conflict today seems to place the blame for the horrors of war on their shoulders. It’s an ugly assessment that entirely ignores their humanity, which isn’t a good place to start for a story starring soldiers.

Drew: I don’t know if it’s just because it followed that lead, but the Unknown Soldier installment also left a strange taste in my mouth for its depiction of its own villains — an organization that wants, among other things: amended legislation regarding the federal reserve, public funding of political candidates, abolishing lobby groups, and decreasing our military presence in foreign nations. I entirely suspect that writers Jimmy Palmiotti and Justin Gray are sympathetic to many of those causes, but in failing to really connect the dots on the zealotry, they end up depicting those groups as opportunistic, homicidal assholes.

After recovering from having a building collapse on him in the previous issue, the Unknown Soldier is quickly briefed on the group that did it: a leftist organization that disavowed any responsibility for the plane bombing, and even helped track down the disgruntled airline employee that did it. It turns out, this particular organization is more interested in hacking into bank records, so the Unknown Soldier goes undercover as a hacker. Only, they know who he is, and quickly give him a bullet to the brain.

I understand the goal of making the villain sympathetic — it makes for interesting moral ambiguity — and I suspect that Gray and Palmiotti are largely using this space as an opportunity to trumpet causes they care about, but the treatment here doesn’t make these villains (or their causes) sympathetic at all. The Unknown Soldier rightly points out that, if they go through with their plan — to drain the three largest investment banks — it will throw the planet into an economic depression. Instead of a reasonable justification — “most of the planet is already living in poverty,” “this will simply level the playing field,” or even “the entire planet can’t be in an economic depression simultaneously, since that shit is relative” — we get a callous explanation that it won’t affect them, so who gives a shit?

Granted, that assessment comes from Grankowski — who’s clearly an opportunistic sonofabitch — but without any other, rational explanation, we’re left with a portrait of a group that is kind of arbitrarily playing with people’s lives. Without exploring their motives, the morality of this story actually gets simpler, rather than more complicated, boiling down to “stealing is bad.” Not only is it a weird moral for a modern narrative to hinge on, it’s a weird point of departure for a story about soldiers in war. It’s interesting that Palmiotti and Gray are pushing us into cyber-warfare — likely the most important battleground we’re involved in — but undercover espionage just doesn’t feel like soldier territory.

I think that may be my biggest complaint with this whole issue, Patrick: with troops still on the ground in actual conflicts, why are we focusing on fictional ones? It’s not like Nazi’s are a particularly timely villain. Does the distance in this story from boots-on-the-ground combat make you uncomfortable at all?

Patrick: I don’t know that it makes me uncomfortable so much as it makes we question the utility of the Unknown Soldier in combating these evils. In this issue as the previous, he goes undercover to infiltrate whatever group of domestic baddies the good guys are up against. But like, he doesn’t possess centuries of Master of Disguise experience, he possess centuries of murdering experience. That zero issue didn’t include a montage of learning different accents and wearing fake mustaches, it depicts a shit-ton of killing people.

This is the second time in as many issues that Unknown’s clover is blown, which leads me to believe that he’s just not built for this conflict. And maybe that’s the real point of this thing. Even if we were to deploy the Unknown Soldier to the desert, his kill-first-ask-questions-later attitude would make him an utter failure of a soldier. Modern soldiers are trained in counter-insurgency and peacekeeping — they’re charged more with rebuilding than they are with tearing down. That’s a cool angle: “traditional warriors cannot fight modern wars.” I don’t know how compelling it will be to watch a hero that fails over and over again, but the message is interesting.

I get sort of distracted by weird little minutiae in this issue. Like the stunt Unknown pulls in the bar to get Wosley’s attention… he reprograms a bunch of phones and calls them all at once? It’s a weird show of power that does really demonstrate his willingness to skirt the law. Isn’t that kind of more important than playing some prank with phones? Also, here’s a question: is he wearing a mask over those bandages? I don’t think a guy with scars all over his face makes the best undercover agent. Also also also why would Wosley be wearing a Superman t-shirt?

I don’t think you need to explain why a random bro (or a child) would be wearing a Superman shirt. But a grown-ass woman — especially one that’s conducting a job interview — there needs to be some reason the character is dressed this way. Otherwise the answer is just “Johnson wanted to draw the logo and Legal said okay.”

I suspect my last complaint can be written off as a casualty of this two-stories-an-issue format, but there is some condensed-ass storytelling at the end of this issue. Gronkowski happily gives up all of his motivation for turning on Unknown — even though he’s seconds away from shooting him in the head. Since I suspect Unknown will pull through (what’s an enormous head wound to a superhero?), why not leave the reasons for his treachery a mystery for now? I’m just not convinced Palmiotti and Gray and handling the intrigue in this series as well as they might — but basically everything hinges on it. That’s a problem, and no amount of cyber terrorism is going to wash that away.