Taylor: We are all irrevocably tied to the past. Everything that we are and everything that we hope to be is somehow tied to what came before the present moment. Even though many have tried to escape their past, they have done so only futilely, for no man can escape the firm grasp of time’s arrow. While regret is certainly a part of living with the past, so is the realization that it can serve to inform us and makes us better people and our pursuits nobler. Teenage Mutant Ninja Turtles has a past, one that is as checkered as any comic book to date. From its origins as a goofy and weird cult favorite, to the franchise-building TV show, and the franchise-crumbling movies, TMNT has truly experienced a varied life – to say the least. With all this cultural baggage built up, one would think it hard to revitalize the series while also staying true to its roots. However, Kevin Eastman, one of the co-creators of the series, has managed to pull off this feat in the annual edition of TMNT by acknowledging the past while at the same time taking a step toward the future.

The annual edition of TMNT doesn’t fall into place with the order of events that have taken place thus far in the series. Instead, the action of this comic is set as some point in the past before the Slash story line. Casey and Raphael are on patrol one night when they are witness to (or perhaps cause of) a car crash that leaves all of its occupants knocked out. A briefcase full of diamonds flies out of the car and into the hands of a homeless, boxing drifter. It turns out that these diamonds were being sent to the Foot Clan on behalf of the Savate Ninjas as a tribute, so naturally both of these groups begin a search for the diamonds. Two crooked cops also join the chase for the diamonds, which end up in the hands of Angel’s father who later teams up with Casey and Raphael while trying to dispose of the unwanted riches. With so many parties interested in the diamonds (which are worth millions) a HUGE ninja fight involving the turtles, the Foot Clan, the Savates, the Purple Dragons and the police breaks out on the docks. The diamonds are lost to the sea and every interested party goes home empty handed. Easy come, easy go.

When I first popped open this issue, which is both written and drawn by Eastman, I noticed that it was dedicated to Peter Laird, co-creator of TMNT and Eastman’s “brother of another mother.” Given the throwback vibe of this comic, I found this dedication to be really touching and it pleased me to see that despite their differences, Eastman still holds Laird dear. For those who don’t know, there is another TMNT movie in the works which is being directed by the always explosive Michael Bay. Laird, and not Eastman, is being consulted for some of the creative aspects of the movie, one of which alters the origin story of the turtles. Eastman publicly scrutinized such a move and while things could have gotten ugly between the two TMNT creators, it’s plain to see from this issue that Eastman is giving due respect to the past and his friend. Given the retro style of this annual issue it seems like the perfect way to acknowledge the creative origins of the turtles while also firmly taking control of the comic aspect of the franchise. Also, the dedication echoes the overtones of loyalty that pervade this title, so I enjoyed seeing Eastman essentially practicing what he preaches. This is just a classy move all around that helped build some good karma for this issue.

Naturally the art for this issue is attention grabbing since it’s a stark departure from the artwork of the previous issues.  I didn’t mind the change at all because, from its very inception, this iteration of TMNT has made fairly bold choices with its artwork. In previous issues Dan Duncan, Andy Kuhn, and Eastman chose a vivid, if not entirely realistic portrayal of the TMNT universe, a wise choice given the subject matter. In this issue, we see a similar art style but one that also looks like a fusion of the turtles from the original comics with those of the latest editions. The effect is a comic that looks both vintage and modern at the same time. The absence of color certainly adds to this quality and what I further enjoyed about the art was how it actually forced me to take a good look at it, as oppose to a quick glance, which I am sometimes guilty of doing. Whether this is due to the absence of color or the sneaky amount of detail Eastman includes in his panels I’m not certain, but it is striking regardless. 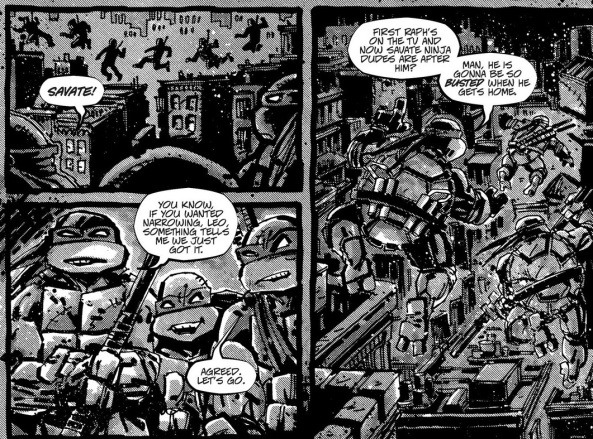 The plot of this issue — while not the most impressive to date — was still entertaining and did an effective job of deepening the universe the turtles occupy. While I’m a fan of heist plots (i.e. Snatch and Lock, Stock, and Two Smoking Barrels), I wasn’t super enthralled by the events that played out in this issue. I think this is probably due to the small amount of turtle action we actually get in this issue, since most of the plot is driven by regular ol’ humans. It will be interesting to see how this annual issue fits in with the rest of the series as it progresses. If the title continues to make reference to some of the characters that were introduced in this issue then it’s merit will certainly rise, otherwise I’m not sure why I should care about who wanted the diamonds and why.

Hero in a half Shelby! This is your first review for TMNT – what are your general thoughts about the series? Does it live up to the nostalgia wrapped memories of your youth? Also, does this make you want more turtle action?

Shelby: I’m a little more lukewarm on this issue than you are, Taylor. This is indeed my first foray into the TMNT universe, and mostly I found it both hard to follow and overly simplistic. The art was a big sticking point for me; with the lack of color and chunky, high contrast style, I really had a hard time following the action. Telling a heist story with multiple players all zeroing in on one point is a hard story to tell in this medium; the only way to show the overlapping action and missed connections necessary is by employing a series of short flashbacks and repeated actions. “Five minutes earlier” gets real old, real fast, and while I can appreciate the ambition behind taking on this story, I think the flow was too jilted for me to get into, and the pencils too loose and messy for me to follow.

There were also elements of the plot that I just wasn’t wild about. There’s an emphasis throughout of the Turtles, especially Raph and Casey, Doing The Right Thing. I imagine it supposed to act as a reflection of the strict honor code Splinter has imposed, as well as firmly establish them as the good guys in a world which appears to be jam-packed with corruption. Personally, I found the focus on their do-goodedness a little eye-roll worthy. It’s probably because the Turtles as The Good Guys is housed in a zany heist. This is more a matter of taste than a solid critique, but the wacky heist with its misunderstandings and corny one-liners is not what I’m looking for in a comic book.

I was also pretty dissatisfied with the ending. After contributing to all 62 pages of shenanigans in this book, Casey and Raph go back to playing the exact same game they were playing at the get-go. Their shenanigans helped incite a massive gangwar, and their main concern is getting the dishes done so they can go out and play some more. I’ll accept the fact that it’s because they’re teenagers, and teenagers are selfish and oblivious to the world around them, but why would I want to read that? I don’t have any interest in reading a story of a couple dickish kids. This begs the question: who is the intended audience for this book? It’s not rated, but it does suggest “mature readers,” so probably not the teens most able to associate with these characters. I think this book is meant for you and me, Taylor; young adults who loved the franchise as a kid and want to take a stroll down memory lane with their favorite heroes on the half-shell. For me, that explains the blend of nostalgia (Mikey DOES love pizza, you’re right!) with the darker,  grittier elements of the story (remember how they incited a 4-way gang war?). While there were elements of the issue I liked, it ultimately leaves me uninterested in further Turtles adventures; I think I would rather just remember how much I liked TMNT as a kid and leave it at that.