Drew: Regret is a funny thing. We’ve all felt it, even if for something as simple as wishing we had ordered that other thing that looked good on the menu. It comes in many flavors, from shame to wistfulness, but all require us to be removed in time from the event we regret. As an observation, that’s almost too obvious to mention — except when time stops working like we expect it to. We’re used to looking back, but how does regret work if you can look forward, as well? At the end of its first three issues, All-New X-Men seems poised to address this very notion, as we rapidly take the perspectives of people looking to their pasts, as their pasts gaze into their future. It’s a crazy idea, but just like the plan that brought it about, it might be just crazy enough to work.

The issue opens in the aftermath of A vs. X, as Scott Summers teams with Magneto and Emma Frost, recruiting new mutants into their army. Elsewhere, the remaining X-Men are confounded at Scott’s actions, wondering how the idealist they all knew could have fallen so far. Inspired (and fearing he may die before doing any lasting good in the world), Hank McCoy travels back to the early days of the X-Men, to convince the Scott from the past to confront the Scott of the present. Scott and the other X-Men are more than a little incredulous (if Scott has changed the most on the inside, Hank has changed the most on the outside), but he’s able to convince all of them — Cyclops, Iceman, Archangel, Beast, and Jean Grey — to come with him. Of course, none of the present-day X-Men think this is a good idea, but they’re distracted by Hank’s rapidly declining health. The X-Men of the past resolve to stop Scott of the present, and stage a cunning escape.

That escape closes out issue 2, an issue seemingly designed to get the nerd center of my brain pumping its fists. Time travel? Past versions of characters running amok in present day? Yes, please. It’s like Brian Michael Bendis took all of the boring parts of Back to the Future (not many, I know), and replaced them with THE MOTHER FUCKING X-MEN. It’s a moment so awesome, all Kitty Pryde can muster is a few “uh-ohs” at having broken the space-time continuum. 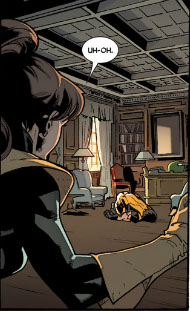 It’s hard, then, for issue 3 to not be a bit of a letdown. Bendis winds the clock back to show Magneto and Cyclops breaking Emma out of prison, and demonstrates how the three of them are losing control of their abilities, seemingly as the result of their interactions with the Phoenix. Magik, on the other hand, has seen her powers grow, possibly also because of the Phoenix. As the team gears up for another “recruiting” mission, they are confronted with the X-Men of the past.

It feels a bit of the strain of the mythology its hoping to tease out. It’s not a bad issue, but it can’t help but feel slow after the rallying cry of the previous issue. That said, for an issue that is mostly designed to put the pieces in place, it accomplishes that task ably — I can think of no better position for these particular pieces than facing each other at the start of issue 4.

For me, though, the most interesting ideas are introduced in issue 2, where the X-Men confront themselves (an their friends) from different time periods. I say “different time periods” rather than “past” or “future,” because Bendis so ably vacillates between perspectives — we see the present X-Men filled with sadness at the sight of long-lost friends, but we also see that sad recognition reflected in the X-Men of the past as they also recognize how the world around them has changed. The best moment comes as Wolverine rushes to attack what he knows must be impostors, but he recognizes them. Impossibly, Jean may return that glimmer of recognition, perhaps reading his mind, tapping into abilities she doesn’t yet know she has. 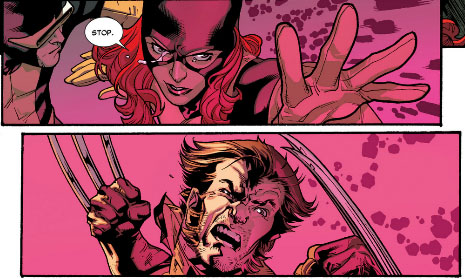 Of course, for all those heavy ideas, this title is also a ton of goofy fun. Bobby in particular is tapped on as comic relief, but Wolverine also gets in some good lines in his morning class on how to fight ninjas. Bendis also mines a lot of humor simply from the situation — nobody knows what to call each other, so they resort to shorthand like “little X-Men,” and “blue Hank.” It’s a cute and all-too-familiar solution for anybody whose ever had more than one Michael writing on their comic book blog (hi guys!).

I’m loving this title, but as I mentioned earlier, it’s tapping into some primordial part of my nerddom, to the extent that I may be blind to any faults it may have. It’s a good thing, then, that we have Shelby around to double-check with. Shelby, is this title as good as I think it is?

Shelby: It’s getting better. I have to say, I was not sold on issue one; the issue concludes with Hank suddenly appearing in the past. I don’t just mean he shows up and we don’t know why, he shows up and we don’t know how. Could be it’s leftover knowledge from A vs. X, could be I just wasn’t patient enough to wait for the explanation in issue two, but when I first read it I was really frustrated. Having a character suddenly appear in the past without use of time travel powers seemed more clumsy and confusing than a shocking cliffhanger.

That’s not to say it hasn’t grown on me. The way time travel is being handled is unique; it’s not often you find someone deliberately trying to fuck up the timeline. If anything, anytime the good guys encounter time travel, they do everything in their power to avoid this exact situation. 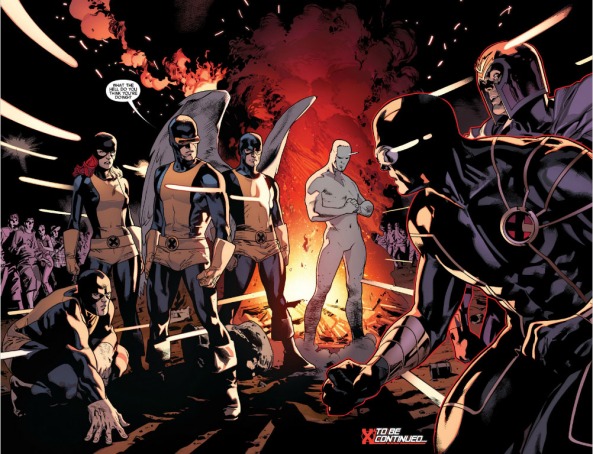 That’s, like, rule one of time travel: don’t try to meet yourself, because of paradoxes and shit. Well, rules be damned, because that’s the whole point of this time travel! And what a move for Hank to make; he’s absolutely brilliant, he knows exactly how dangerous the repercussions of this sort of thing are. Honestly, I wouldn’t do it. I wouldn’t be able to go back in time to change my present; it’s pretty selfish. “But Shelby!” the readers cry, “Hank isn’t being selfish, he’s doing this to save Charles and ultimately many many lives!” That would be totally true, if not for the ripple effect of time travel; who knows how many lives will be messed up by his actions?

I’m intrigued by this title. I’m not quite as enamored as you are, Drew, but I don’t think it’s bad by any stretch of the imagination. I’m always fascinated by the various ways media handles time travel, even if thinking about it too hard makes my brain fall apart. And I kind of like the cheekily straightforward retcon. The X-Men just had a major event in their continuity, and instead of some tricky, dumb, behind-the-scene fix months/years down the road, Bendis decides to just send Hank back in time to undo it. It’s the Occam’s Razor of Retcons. This title has got me curious of the repercussions of Hank’s choices; if I don’t like how things turn out, I’ll just go to the past and tell Old Me to come to the future to persuade Bendis to write it differently.

For a complete list of what we’re reading, head on over to our Pull List page.  Whenever possible, buy your comics from your local mom and pop comic bookstore.  If you want to rock digital copies, head on over to comixology and download issues there.  There’s no need to pirate, right?