Shelby: What do you do when things go wrong? When something doesn’t happen the way you’ve planned, how do you react? If you thought ahead and have a back-up plan, there’s nothing to worry about. But what if you are the back-up plan? What if you are the one who has to step up when things fall apart and figure out how to hold everything together? Between FF and Fantastic Four, Matt Fraction shows us both sides of the coin, and it gives him an opportunity to tell a pretty unusual kind of story.

The story starts with the Fantastic Four seeking out their replacements. Johnny chooses his pop-star lady friend Darla Deering, Ben his sparring partner She-Hulk, and Sue her bestie Medusa, Queen of the Inhumans. Reed tricks a very reluctant Scott Lang, a.k.a. Ant-Man into helming both the Fantastic Four and the Future Foundation, Reed’s version of Xavier’s School for Gifted Youngsters. We know how this goes: the Fantastic Four do not return in 4 minutes, and Scott et al  find themselves facing the possibility of being the Fantastic Four in perpetuity. Darla realizes this superhero thing is a lot more intense than she thought, so she quits. Shortly thereafter, an aged and broken Johnny Storm bursts through the portal, shutting it behind him and proclaiming the Fantastic Four is dead. Dr. Doom had joined forces with Kang the Conqueror and Annihilus and killed the rest of the group. Johnny (sorry, he prefers John now) managed to escape. Scott gets Darla back on the team, because he knows his plan will need everybody on board to succeed. Oh, did I not mention? Scott wants to take out Dr. Doom and possibly change the future.

Oh man, I had such a hard time not talking about this title in the Fantastic Four write-up. Fraction has hit on a clever and creative way to tell these stories; with Fantastic Four being so far out of sync with FF, time- and space-wise, we have the ability to both enjoy their current adventures and potentially know their fate. I can’t help but think of Thor when I read these titles; like Jason Aaron, Fraction is presenting us with the beginning, middle, and end of the story. Anchoring this story is Ant-Man Scott Lang. In issue one when Reed is asking Scott to lead the FF in his absence, we learn that Scott’s daughter Cassie had recently died. Does it seem a little cold that Reed would put his friend, grieving over the loss of his only child, in charge of a bunch of children? Yes it does: Reed intentionally led Scott to believe he meant the Fantastic Four, he knew he would never say yes otherwise. Reed is not doing a great job convincing me he isn’t a dick.

Scott is fast becoming another character for me to fall in love with; he delivered a beautiful speech when he went to convince Darla to re-join their ranks.

There are a lot of things happening to Scott right now. He’s got the constant grief over his daughter, grief over the loss of his friends, this scary new burden, the responsibilities of being in charge of this group of super-powered children as well as maintaining the safety of the universe; it’s no wonder he’s tearing up. That’s actually something you don’t see very often in comic books; Patrick, when was that last time you saw a man in a comic book crying? Identity Crisis? No, Arthur cried in the flashback to his dad’s deathbed. The point is, this is a genuinely emotional moment and Scott is reacting in a believable, understandable way. Now where else have I seen this sort of real world emoting in a male super-hero? Oh, that’s right, in Fraction’s Hawkeye. Fraction has a very unique voice that I appreciate immensely. There are few writers in my pull list who can really capture the “I’m a real person who’s maybe kind of a mess but doing the best I can” vibe quite like Fraction.

Speaking of unique voices, I’m going to use that as my awkward segue to talk about Mike Allred’s art. His style is a lot more cartoony than I generally prefer, but god-damn if it isn’t charming as all get-out. Allred has a great handle on the little details that make these characters who they are. If Reed is in a scene, he is literally stretched like taffy all over the page; the man can’t seem to hold himself together, and that’s adorable. Or Medusa being unable to prevent her hair from forming the shape of a heart when she thinks about her husband: also adorable. One of my favorite exchanges is between Ant-Man and She-Hulk as they wait for their four minutes as the Fantastic Four to be up.

It’s a simple exchange between two characters. There’s almost no variation in the panels and little text. By all definitions, this should be a pretty boring page. And yet, the expressions on She-Hulk’s face just crack me up. On top of that, Allred was thoughtful enough to change the positions of the antennae on Scott’s helmet; he can’t really show any emotion on Scott’s face with the helmet on, so Allred found a different way for him to emote.

This title is unusual. It’s got the fun, light humor I’ve come to expect from Fraction. It has some suprisingly touching emotional moments. It has weird science fiction and Marvel characters I don’t understand. Mostly, I just find it fun and charming, and more importantly a super interesting companion to Fantastic Four. What do you think Patrick, how do you feel about the way these two titles work together?

Patrick: I really like the way these titles don’t have to work together. Both you and Drew mention the temptation to talk about one series while discussing the other, but I don’t think that’s necessarily how I’m viewing either of these series. The event that connects them is fascinating, and it is totally remarkable that two compelling series concepts can be birthed out of Reed’s Family-Adventures across Space and Time. Other than the (potential) spoiler that something goes terribly wrong with the Fantastic Four’s mission, there’s not that much to connect these series beyond their second issues. But let’s talk about Ant-Man’s plan to change the future.

If the plan is successful – and time travel works the way the characters in the story expect it to — then the Fantastic Four will never encounter these mega baddies in space. So the future, as forecast by old, scarred John Storm won’t come to pass in either FF or Fantastic Four. Shelby, you mentioned Thor: God of Thunder in your write-up, but this particular aspect of the series feels a little more like All-New X-Men, with older, more experienced versions of the characters attempting to change their own past. Brian Michael Bendis has taken the “you can’t change history” approach to time-travel storytelling, meaning that the young X-Men have decided to stay in the future to fix the situation there (er… then). FF doesn’t really have that option – the future they’re attempting to avert kills five-sixths of the Richards family. But how far ahead in the future is that? John looks quite a bit older, and he’s certainly seen some incredible action as they’ve been on-the-run from Doom et al. 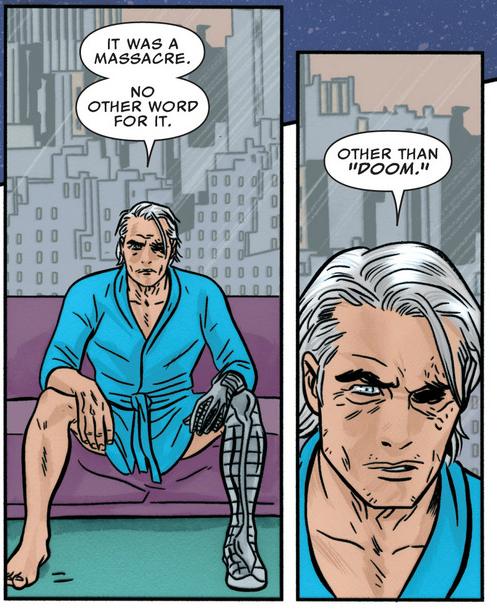 He’s missing that left leg below the knee and part of his left arm, plus he’s missing an eye (no patch or nuthin’, cuz he’s tuff). I can’t wait to see this character in action, and it’s going to be remarkable to see how Fraction writes two different versions of this guy on two different books at the same time.

As excited as I am to have this series to act as a sort of long-form narrative featuring the Future Foundation, I’m most impressed with the series’ ability to find a single emotional hook and stick with it. There might be a bunch of on-going mysteries that show up from issue to issue — like the aforementioned We Have To Save The Fantastic Four story or the What The Hell is Mole Man Up To? story — but the on-going emotional thrust of the series is about finding your place and your purpose in the world. Scott Lang is the most obvious example, as he starts the series as a reluctant leader of the FF, grows to accept some responsibility for their actions, and then forms a plan to accomplish something he believes in. There are hints of similar discoveries of agency in Ms. Thing, and I look forward to seeing all four members (and Johnny Storm) exploring this concept further.

Shelby, you posted one of those great Michael Allred scenes that show his gift for sequential expression, but I’d like to post one more. If we get one of these things an issue, I’ll be pleased as punch.

The acting in any one of these six drawings is stellar on each character. It makes for a nearly silent moment that lets the reader reflect on what it would be like to have to recognize a loved one that doesn’t look quite right. For as much as the characters talk about scientific ways to verify that this is Human Torch, it’s hard to argue with the emotional impact of this sequence – we can believe that it’s him because we feel that it is.

I hadn’t considered until just this very moment, but what if that isn’t Johnny Storm? Are we suckers for trusting the identity of this guy? Time, we can assume, will tell.

Anyway, I’m really enjoying this. It’s exactly the right mix between style and heart, which is something I’ve come to expect from Matt Fraction. It feels a lot like the bachelor version of Fantastic Four, and that’s a great counterbalance to the gee-whiz-ness we get in that series.