Patrick: We’re posting this two days after the Academy Awards, but I’m writing this at 9:25PM, Pacific Standard Time, the Thursday before the ceremony. I’m being so specific because I want to make a prediction: Lincoln will not win Best Picture (editors note: called it!). For everything Lincoln does well, it does not earn the sentiment expressed in its many soaring speeches. Endings are so naturally powerful, and it’s a shame how frequently Spielberg employs John Williams’ moving score and the impassioned performances of some of the best living Hollywood actors to approximate the feeling of catharsis. It’s a shortcut, it’s phony, and it stinks. J.H. Williams III and Hayden Blackman employ no such tricks as they wrap things up in Batwoman 17 and every single moving moment — and there are many — is earned.

This issue is all about resolution. In that spirit, Wonder Woman, Batwoman and Bette — as the newly christened Hawkfire — systematically dispatch Medusa and her goons, leaving behind only Ceto, queen of monsters. By this point, however, Ceto isn’t nearly the terrifying monster you might expect her to be, so Wonder Woman takes mercy on her and spirits her away to safety. Emboldened by the team victory, Batwoman destroys the surveillance video she was recording for the D.E.O. Then Kate takes the ultimate victory lap: she marches the rescued children up to Maggie’s side and pops the question. (My little sister Courtney points out that — depending on the state Gotham is in — that proposal might be purely symbolic. Either way, it’s touching.)

I’m a patient man, so I don’t mind waiting to see how a story ends — especially this case of the missing children. The strength of this series has never never never been in the plotting, but in the rich characters, dense themes and Williams’ mind-bending art. So it’s kind of weird when my thoughtful, meditative character study decides to cash in on a year-and-a-half of plot set-up. My normal instincts to dissect the subtler themes expressed in this issue (like the idea of the power of a fresh start as personified by both Ceto and Bette) are totally overridden by the primal joy I feel at seeing a story’s happy end. I always want to intellectualize my narratives, but some things just work because they’re so fucking beautiful.

Strolling out of the mist, with the spoils of her victory right behind her – it’s hard to ask for a more poetic moment to celebrate the triumphant Kate Kane.

Okay. Okay man, focus up. We’ve got some other shit to talk about.

I love the way this final battle goes down: it’s basically the perfect mix of mythical battle and superhero gimmickry. We all know the necessary solution to the Medusa problem: reflections. Perseus used a polished bronze shield to keep from looking directly at her and our heroes shatter a mirror-monster and turn the stone-gaze against the Medusa, but the nugget is the same. It’s super satisfying to see Bette play such a big part in this battle, and while her torching of Hook-Hand is awesome, I can’t get over how cool it is to see all three of these powerful women united in this single strike against Bloody Mary:

It’s just such a gratifying moment for everyone. Wonder Woman gets to conquer yet another monster, and Bette and Kate are reunited as a bad-ass crime fighting team. I suggested in my summary of the issue that Kate is emboldened by their successes, and that gives her the courage to both stand up to Chase and propose to Mags — and there certainly seems to be a running theme of self-perception playing a large role in identity. Ceto is a reality-tearing monster because that’s what she wants to be for her daughter Medusa; Wonder Woman is the gentle hero, so she lets Ceto live; and poor Abbot dies valiantly in battle because he sees himself as the fearless warrior. The issue is also filled with reflective surfaces, huge eyes, and Bloody Mary explicitly threatening to tear our heroes’ faces off and wear them as masks. I’m so glad that the doubt and anxiety that’s been swirling around who these characters are gets to be resolved so affirmatively (for everyone but Abbot, I guess… can’t win ’em all!).

There is an elephant in room that I’m specifically not mentioning. Alice. Just when things seem their most-resolved, BAM! some Kane-family baggage threatens to rear its ugly head. I guess it’s a reminder that no matter how much we feel like moving on, there’s no escaping what came before. I’m listening to Aimee Mann right now, so the following Magnolia quote jumped to mind: “the book says: we may be through with the past, but the past is not through with us.”

Suzanne, what do you make of that final reveal? Is it almost a little too comic booky for Batwoman? Or are you, like Kate, emboldened to see her tackle one more deeply personal issue?

Suzanne: Full disclosure: I love the trope of bringing comic book characters back from the dead. Sometimes I’m actually disappointed when characters don’t get killed off, especially in major story arcs that tease someone’s impending demise (Death of the Family, anyone?). No, that doesn’t make me a psychopath. It makes me a comic book fan, like many others who predict how long a character will “stay dead” this time and what plotline will bring them back to life. The challenge for a writing team is to bring back a character in a meaningful way, which is something J.H. Williams III and Haden Blackman succeed in doing here.

The pieces fit into place so that Alice’s reappearance doesn’t feel too gimmicky or convenient. As a long-time reader of the series, I appreciate little Easter eggs like Alice emerging from the sarcophagus in the big-reveal ending. This sarcophagus makes its debut in the first #0 issue, when Batwoman fights members of the Religion of Crime and fails to retrieve it. That small plot detail shows me how Williams and Blackman planned Alice’s return from the start of their run. They also weave together important character moments for Kate, from her recent victory to overcoming guilt about losing her sister. Patrick, I’m with you that Kate is more confident on all levels at this point. What better timing for her world to come crashing down? A homicidal sister and some literal skeletons in the family closet? Bring ’em on!

Of course, I’m getting at another shocker in the issue — Director Bones. That final piece of dialogue, with Bones telling Alice she has “our sister’s eyes” blew me away. A million possibilities popped into my head, and not all of them flattering to Jacob Kane. It provides the perfect setup for a new story arc focusing on Kate’s family drama. What is Bones’ relationship to the Religion of Crime? Why does he go to such lengths to preserve Alice and what are his plans for her? I’m psyched to see where Williams III and Blackman will take this. 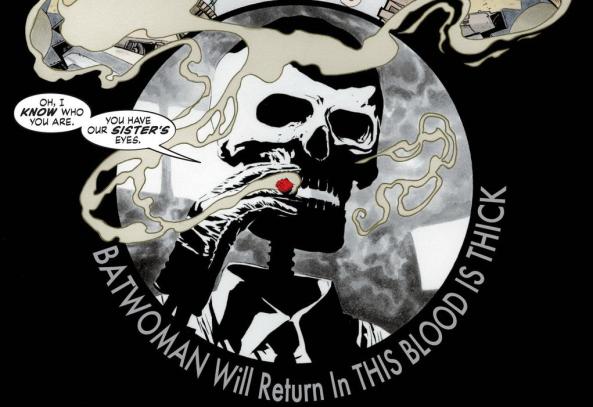 Patrick, I agree with your thoughts on self-perception and identity being major themes in this title. Williams III and Blackman carefully deconstruct each character throughout the different arcs and give some of them (Bette!) agency in this victory against Medusa. I will argue that even Abbot undergoes a strong character progression. Looking back to Issue #12, Abbot and Batwoman enter Bloody Mary’s house of mirrors and he reveals that he sees himself as a ghastly monster in his nightmares. In the current issue, Abbot realizes he is stronger and more loyal as a werebeast than as a man. He embraces that part of himself and dies bravely fighting Medusa. His loyalty to Batwoman redeems him in my eyes after deceiving her in the Elegy story arc. Okay, enough Abbot love.

This title’s greatest strength is its character development and relationships. Although there are action and plot developments, they would probably fall flat without the strong characterization of Kate Kane and her supporting cast. Romance, while ever-present in comics, remains a weak point for the genre (ugh, the Young Romance annual). Yet the relationship between Kate and Maggie feels smart and endearing, not forced to propel a larger plot point or create media buzz. It gives me hope that future issues will deal with the fallout of her having a dual identity and not a rushed wedding blitz.

Suzanne is an American living in Melbourne, Australia. Her gateway drug to serious comics readership was Gotham Central. If you don’t like that series, then you don’t like kittens, rainbows or ice cream.