Shelby: There’s no such thing as a free lunch. Everything has a price, and everyone has to pay it eventually. It might be nice to try to live your life like that isn’t true: to give of yourself freely and expect nothing in return. While I believe the world would be a better place if everyone were less selfish, if we all helped each other out with a no-strings-attached free lunch every now and again, I know that there will always be people who will take advantage of that system. People like John Constantine.

Constantine wanders around New York, thinking about how magic lets people like him think they’re cheating the system, getting something for nothing. As he ruminates on just how much magic will cost you in the end, he runs into a kid named Chris, who is seeing things and it hurts. Turns out, Chris’s painful divination reveals the hiding place of the needle of Croydon’s Compass, a device that will lead anyone to any sort of magic they are looking for. The two head to Norway, but after Constantine finds the needle, Chris is put under a “crushing” spell by Sargon the Sorceress, daughter of Sargon the Sorcerer and current head of the Cold Flame Cult. She says Chris will be “snipped into pieces” unless Constantine turns over the needle. Naturally, Constantine bails, needle in hand. Sargon goes on a rampage looking for him, and Chris, well… 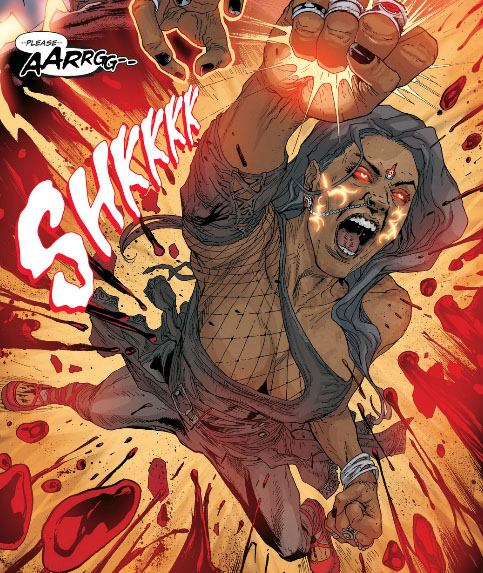 This is the perfect introduction to John Constantine. Jeff Lemire and Ray Fawkes have a great handle on this character. They’ve given us a scenario that exemplifies why I like him so much. On the one hand, he’s embarking on a quest to keep an extremely powerful magical device out of the hands of evil magicians. On the other hand, he’s not really one to be trusted with an extremely powerful magical device and, oh yeah, he let a boy get torn apart. By most definitions, that should make him a villain, but somehow it doesn’t. I think it’s because Constantine understands that there are limits to what you can cheat. For him, it’s not a question of whether or not you’re going to break bad with your magic, it’s a matter of how bad you are going to be. There’s some sort of secret balance that needs to be kept of how much people can trick the universe into giving them, and John thinks that maybe he’s the one to keep that balance. I don’t know what it is that makes him think he should do that; it could be something as simple as “there are way worse people out there,” which this issue does a pretty good job establishing. It could be something more; maybe this sort of Magictown police work is the price Constantine has to pay for things he has taken in the past.

Renato Guedes is handling pencils for this title; I’m not familiar with his work, but I like what I see so far. There’s a sketchy, loose feel to his art that I’m a fan of. 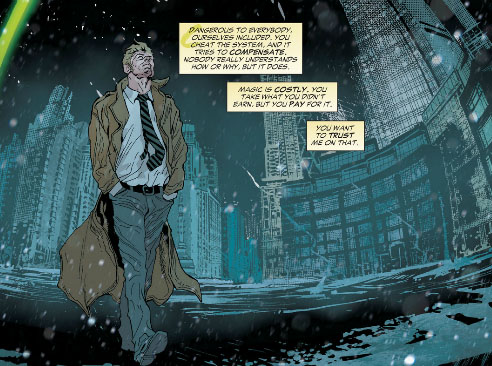 Guedes’ style reminds me a little bit of Egon Schiele, an Expressionist from the early 1900s. His wiki is NSFW-ish: he painted a lot of nudes. I get that same gritty, slightly out of control vibe from Guedes that I do from Schiele. It’s like catching a glimpse of something awful just below the surface; in Guedes’ case, it’s only a flash, and it’s gone so quickly you aren’t sure you saw it. In other words, a style perfectly suited to Constantine’s world.

I was anxious about this book. It’s no secret ’round these parts how much I love John Constantine. While I trust Lemire and Fawkes completely, especially considering how good they’ve made Justice League Dark, there was a small part of me that was a little nervous how this issue would turn out. Well, that part of me was totally stupid; I’m very pleased already with the direction this book is taking. Constantine is the asshole with a heart of gold who might actually just be an asshole, we’re already a third of the way through a magical quest, and we’ve got totally badass deaths, magic-style. What about you, Patrick? Am I just blinded by my love of this character, or have Lemire, Fawkes, and Guedes already shown us they are on to something great with this title?

Patrick: Jeff Lemire has this wonderful way of quietly defining characters without standing up, pounding on the table and yelling “THIS IS WHO THIS GUY IS.” Over the last two years, the man’s been tasked with restarting Animal Man, Justice League Dark and Green Arrow – each of these series possesses a strong sense of identity right off the bat, but they also move effortlessly – as though Lemire has nothing to prove. This is doubly true of Constantine, as we already know we like to see John Constantine under his pen. It’s the same reason I assumed we’d pick up Uncanny X-Men (that is, because we already have evidence of Brian Michael Bendis writing compelling X-men stories). And while this issue does make a point of showing off one of John’s more bastardly qualities, that’s not the only thing the issue achieves.

And that’s a good thing – right, Shelby? Statements of who John Constantine is are always going to be less interesting than the world he insists on surrounding himself with. Y’know, the world where random people have mild clairvoyance or the MacGuffin he’s after is in that ice hotel in Norway. For as imaginative as some of the details are, the broad strokes of this story are simple to the point of being iconic. I mean, come on – the compass is broken up into three parts? The first piece of which is the needle. THE NEEDLE! I’m almost surprised they didn’t have to look for it in a haystack. That’s all part of the familiar charm of a John Constantine fetch-quest: the objective is classic, but the hero is some wonderful combination of Han Solo, Indiana Jones and Malcom Reynolds. Only, magical.

Shelby, that’s a good call about Guedes’ art style. I was struck by how frequently he uses odd ‘lenses’ to warp the world around John. The impressionistic elasticity is always visually justified as a trick of photography or perspective. In addition to that beautiful city picture you posted above, check out this panel from the plane ride to Norway. 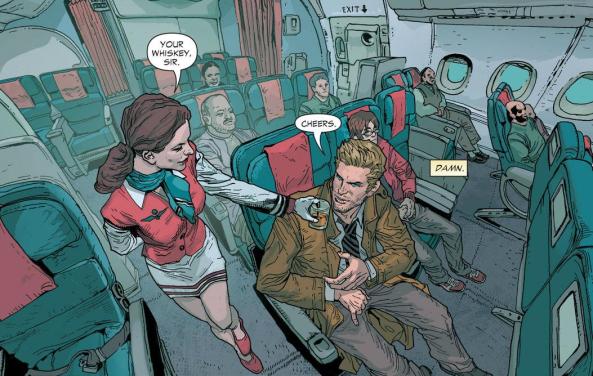 I’m not quite sure that I like Guedes’ loose characters, but that might be a function of the coloring, which is incredibly tight. This issue was colored by Marcelo Maiolo, whose praises we were just singing on the most recent issue of Green Arrow. Maiolo is awesome at using two shades of each color to add some very dynamic light and shadow to the scenes he colors, but the effect is oddly flattening when paired with Guedes’ lumpier characters. It’s just such a specific style of coloring, and it works really well with Andrea Sorrentino’s characters, which are equally stylized, but much colder. Guedes, as Shelby mentions, suggests the imperfections and weirdness of these characters, and I wish the coloring could reflect some of that warm chaos.

So: fun issue, I’m excited to see where Lemire and Fawkes will take this thing. Just from this one issue, it looks like the JC of Constantine will be interested in self-contained magical stuff and the JC of Justice League Dark will be more interested superheroes and whatever kind of events DC has planned. Man, can you believe that we have two series that star John Constantine, but only one each for Flash and Wonder Woman? I love Johnny as much as the next bloke (so much so that I just used the word “bloke”), but I don’t understand DC’s priorities. Like, at all.