Drew: Wonder Woman is a hard title to pin down, which makes sense, given that its hero is equally slippery. Detractors might cite Diana’s unknowability as weak characterization, but as we saw in issue 9, that distance may be the sharpest weapon in writer Brian Azzarello’s arsenal. Azzarello seems to relish ambiguity, focusing on heroes that are anything but predictable. Issue 18 multiplies this effect, capitalizing on his large cast of equally oblique characters to produce a staggering parade of surprises.

The issue resumes with Diana and Ares in Demeter’s realm, held at swordpoint by Hermes. Diana and Hermes battle, while a wounded Ares slinks off to find Demeter. Hermes is fighting with his claws literally out, and is proving to be a formidable match for Diana, but fortunately, Orion steps in to lend a hand. By the time they catch up with Demeter, though, they find that Ares has already made off with the baby. Diana blames herself for trusting Ares, but it turns out that he really was out to help — he’s brought the baby back to Diana’s apartment. Meanwhile, Poseidon swallows the first born, because you know how effective that is at killing Zeus’ children.

The main surprises here hinge on the allegiances of the gods. After Hermes’ betrayal, Diana doesn’t know who to trust. Sure, she has a quasi-paternal relationship with Ares, but when he disappears with the baby, she loses all confidence that he might be on her side in this. I can see how some might find the characters impenetrable, or their motives arbitrary, but I find Azzarello’s mix of obfuscation and surprise intoxicating. I never know exactly what’s going to happen, but I always believe it when it does. Far from a cheap ploy, Ares seeming betrayal plays against Diana’s insecurity both amongst the gods generally, and that relationship specifically. To discover that Ares came through, after all, is a touching win for Diana, even if it’s still unclear exactly why he did it.

That’s not to say Azzarello never clears things up. A few fans were up in arms about Orion’s “go get ’em, tiger” ass slap last month, but Orion explains the method to that madness in a way only he could.

See, “Legs”? He wasn’t objectifying you, like you thought. Azzarello is positioning Orion as Diana’s overly macho, but loyal friend. An exchange later in the issue suggests that Orion might just have a thing for Diana, but he expresses it with so little tact as to make it sound like a sleazy come-on. Diana has no interest in that, but it comes on the heels of a more genuine moment between the two, which just might be the kind of thing Diana needs right now.

For all of my pleasure with everyone’s guarded nature in this series, it’s understandably frustrating for Diana. It all comes back to Hermes, but his words in this issue suggest that he might not be as disingenuous as he seemed. When he spirited the baby off to Demeter, we feared that he was in league with some of the other gods, who might wish to harm the baby, but it’s clear now that Hermes was acting in what he thought were the best interests of the child. Sure, he has no loyalty to Zola, but he also isn’t a baby-killer. Of course, it’s not clear why he wants the baby alive — he says he was charged with its well-being, suggesting that he’s working on behalf of someone else’s interests — but it wouldn’t be an Azzarello story if there wasn’t plenty of ambiguity.

Speaking of ambiguity, I have no idea what to make of the scenes with Demeter. I suspect the graphic imagery paired with her passivity is meant to represent the raping of the environment (it’s no mistake that the violence here is perpetrated by War himself), but I don’t know what to do with that reading. The depiction of Demeter as utterly powerless — to the point of having no will of her own — is an interesting avenue for this series to explore, but is so unlike anything we’ve seen before as to be a bit disorienting.

So, Scott, what are you seeing in all of this? Analyzing this series sometimes feels like reading tea leaves to me — I know there’s interesting stuff here, but hell if I can make anything of it. At least we can finally settle on the birth announcements for Zola’s kid: It’s a boy! Does that confirm his identity, or does Zola really have to flip all the way through the baby names book before she lands on Zeus?

Scott: I’ve been tricked by Azzarello enough times that I’ll only believe the baby is Zeus when he sprouts a white beard and starts cheating on his wife. But I hope it is, if only because it would make that last panel super weird. The panel is great; it’s an image of dysfunction, but it’s the closest thing to a family portrait Wonder Woman has ever given us — a picture Diana might actually hang on her wall. Now imagine if the patriarch of this odd bunch happened to be the naked baby they’re all admiring. Not so cute anymore, huh? 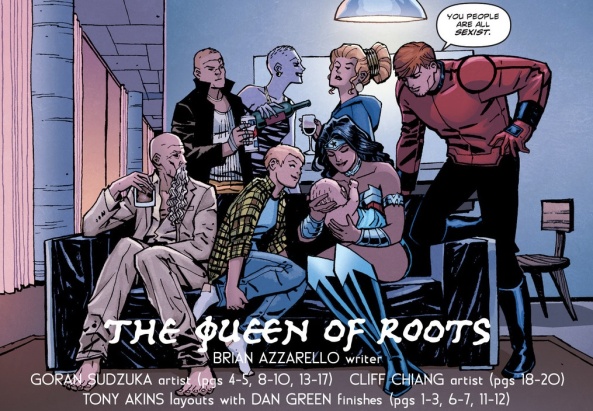 There’s another reason I love this panel: it’s honestly the last thing I expected to see in this issue. Like Drew, I’m having trouble figuring out Ares’ motives, and when he disappeared with the baby I had no clue where he was taking it. Given Azzarello’s tendency toward plot twists and cliffhangers, I just didn’t think we’d find out by the end of this issue. In fact, the search for Zola’s baby has been teased out for so long that this reunion feels like a conclusion of sorts. Really, it was all just a distraction from the more important issues, like “what’s the deal with this baby and this prophecy?” We may still be closer to the beginning of this arc than the end of it.

Drew, I also found the passivity of Demeter quite jarring. Juxtaposed with the fights taking place elsewhere in the issue, Demeter’s inability to defend herself really stood out. Ares suggests that the seasons pass the same way every year, without consequence, but if he were paying attention he’d see that the seasons are becoming harder to define, with climate changes disrupting normal weather patterns and throwing harvest schedules out of whack. The Earth is sick, so Demeter is weak. Or maybe that’s not what Azzarello is getting at at all. I can’t make heads or tails of that hurling a pebble into the sea speech.

With this issue, the saga of the First Born graduated from being “one of many storylines” and squarely became “the other storyline.” I think it’s a significant promotion. Wonder Woman 18 ends without any immediate conflicts for Diana, which leads me to believe the First Born is about to come crashing into her life. That is, if he finds his way out of Poseidon’s belly. But it’s impossible to predict what direction Azzarello will take with Wonder Woman 19. For once, he’s given himself something of a clean slate, with no cliffhanger to pick up on. He certainly has a way of toying with my expectations, because I’m finding this lack of suspense very unsettling.