Patrick: Read The Private Eye. I don’t like starting off our conversation with a demand, but I feel justified in making this one. The story takes place in Los Angeles in the late 21st Century, but it is a decidedly old-fashioned detective story. It’s written by Brian K. Vaughan and drawn by Marcos Martin. You can download the issue at Panel Syndicate for whatever price you think is fair (even if you this $0.00 is fair — the ol’ In Rainbows trick). This is a comic that it is absolutely worth going out of your way to find and to spend money on. But you don’t have to do either.

As this is the first chapter of a proposed 10-issue detective story, it is particularly tricky to summarize the action in this issue. The issue is ripe with exposition, setting up the unique world of this series. The information is so carefully portioned out that it seldom feels like Vaughan is sitting you down and lecturing at you. And on the singular occasion that he does, it’s a fresh breath of clarity — one that seems revelatory and self-damning at the same time. I’m about to break down the story here, and much of that grace is going to be lost — so please please please: read the issue first. Also, we never get a real name for our main character, so excuse the clumsiness as I refer to him as about a billion descriptive pseudonyms. Hell, who needs a name when you have such a clean and graphic concept as a face on the back of a hood?

The issue opens on the sight of a man hiding in the bushes outside of a woman’s apartment as he snaps pictures of her. It seems like pretty straightforward pervert stuff until the woman starts to peel a mask off of her face. But the situation quickly escalates as our peeping tom is confronted by the cops and a full-fledged urban chase scene breaks out. Here’s our first vocabulary lesson for this series (and there will be a lot of them): Journalists are any kind of investigators, so this detective is a Correspondent and the shutter bug that’s currently being chased through the streets is Paparazzi. Once the Correspondent comes to the conclusion that he is on the tail of Paparazzi, his Bureau  Chief and is authorized to open fire on him. The gun fires paint balls – the intent is to tag the Paparazzi and invalidate his anonymity. But our boy is too good, and gives his pursuer the slip.

The next morning, the PI meets with the man that hired him to take those pictures. He looks like he has a fish head. Don’t worry – he only looks that way.

Fish Man here refers to the various nyms his old friend started using — cue our next vocab lesson. Nyms are the various disguises (holographic and otherwise) that people use to obscure their identity. Fishy asks if he can see this woman, and the PI basically tells him to stop dreaming — he could deliver a message to her if he liked, but it would be expensive and likely wouldn’t end well. This scene is incredible and seemingly underlines and undermines the whole premise of the series, but does so before that premise is explicitly stated. We’ll circle around to this in a bit.

Back at the PI’s office, a woman walks in asking for help. (I told you it was an old fashioned detective story.) She’s wearing a holographic tiger nym when she comes in, but deactivates it at the PI’s request. Her name is Taj McGill, and the PI had done some work for her sister in the past. She leaves a $5,000 deposit and asks the PI to look into her own past because she’s applying for some high-profile job (“one of the few gigs that still runs background checks on all applicants”) and she wants to make sure her dirt is properly buried. Before he can properly accept the job, the PI gets a call from his grandfather, who badly needs his grandson to come see him.

Grandpa sits alone staring at his bricked iPhone, complaining that he can’t get the thing to work. That’s when the PREMISE IS ANNOUNCED: 60 years ago, all the information on the internet was made public. Like public public — every PIN, every photo, every Google search became free game. This ruined everyone’s lives, so human beings collectively decided to shut the internet down. In the 2070s, there is no internet.

With that information, let’s go back to some of this earlier business. Fishy’s actions might have seemed creepy at the time, but all he’s really asking for are the services provided by Facebook. He just wants to see what she’s up to now, maybe send her a message that she’ll probably ignore. This scene serves to demonstrate to the readers how warped our views of privacy have become. PI’s grandfather claims that he was (and by extension we are) of the generation that was “proud of who were were. We didn’t have anything to hide.” Vaughan avoids making a judgment about the vanity of this mentality, but let’s the practical security questions linger just long enough for you to realize you willingly inputted your credit card number so you could read this fun story.

It’s also fascinating to me that the world simply finds different ways to have that on-line experience, namely achieving anonymity in real life. That’s why the paint gun the Corresponding is toting is such a big deal, that’s why everyone wears masks, that’s why its odd that Taj’s job would require a background check.

Drew, I could ramble on about the internet-living commentary (and fully acknowledge the irony of doing so on our website), but I suspect you’ve got some good stuff to say about the detective story aspect of this issue. So, is this everything you ever wanted from a futuristic noir mystery?

Drew: Any points I have about the detective beats are part and parcel of what I want to say about this issue as a whole: it’s devastatingly clever. Sure, that scene in PI’s office is a classic dame-walks-in-after-closing, but it also riffs on and openly references similar scenes. It’s no mistake that there’s a poster for The Maltese Falcon on his wall, but old detective stories aren’t the only pop-culture name-checked here. The other poster we see, Angel Face, still kind of fits — it’s not technically a detective story, but it’s decidedly noir — but Vaughan and Martin make a point of showing us selections from PI’s record and book collections, which run into contemporary faire like The Audacity of Hope and Freakonomics, along with classics like Tropic of Cancer or Something Happened. The implication is that PI has some retro tastes (or are these antiques by this time?), which is borne out by the analogue trappings of his office (and, as we learn in the opening scene, that his “Dreamcoat” is an “old form of urban camouflage”). But of course, Vaughan has to have a little bit of fun with the idea of what the “classics” might look like in the future, cramming in an as-yet-unreleased album (on vinyl, no less) by The Flaming Lips, “Their It Was” — presumably the consequent bookend of their first album, “Hear It Is.”

Those details set the scene remarkably well, but I can’t help but wonder if the referenced works might play a bigger role in the narrative going forward. In particular, the Angel Face poster is featured rather prominently in that scene, which rather effectively establishes Taj as a femme fatale figure — a point which comes across even with no familiarity of the film itself. 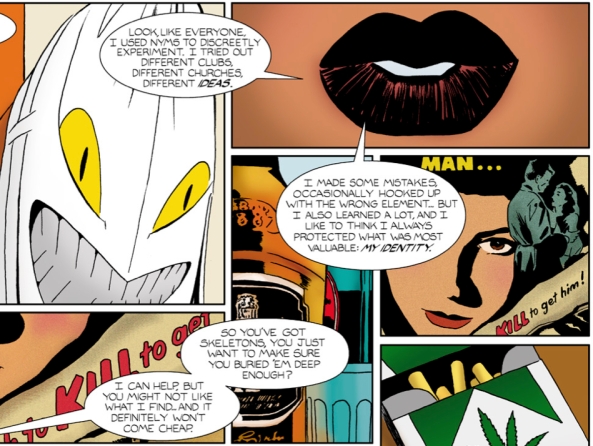 The double emphasis on “Kill” from the movie’s tagline makes it perfectly clear that Taj might be more than she appears. At the end of the issue, we discover that she most certainly is, but she’s also dead, voiding any threat that she might pose — at least directly. It seems that her killer may be coming for PI next, which could be the danger implied by that scene, but I’m honestly not sure if the allusion to Angel Face was intended entirely to fake us out. Were we only supposed to read into it to goose the shock value of Taj’s death, or might there be a larger reference at play here? I have no idea, but I’m as intrigued as hell.

The idea of recreating social media in the real world is fascinating, and Vaughan makes sure to hit every side of it. The issue feels as though it offers a general anti-internet sentiment (and Vaughan fully acknowledges the irony in his afterword), but closer inspection reveals that it is much more complex than that. Sure, recreating anonymity or the ubiquity of ads in the real world draws our attention to the absurdity of those things, but this future also sharply contrasts the free exchange of ideas that the internet provides. I’m not sure that the loss of internet would place us in a propaganda-only media world, but it would limit our access to the diversity of opinions out there. 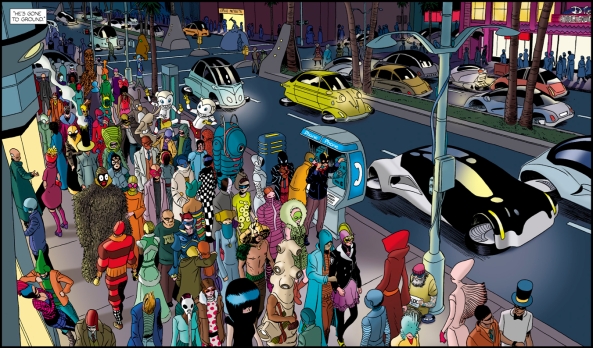 Actually, I’m not even sure Vaughan is rallying against the anonymity of the internet. Sure, everyone looks absurd, but Taj makes a pretty compelling case for why anonymity mighty be important — a pretty far cry from the “only criminals need to hide their identity” argument I still occasionally hear from grown-ass adults. It’s obviously a complicated subject, but we don’t really need an opinion about it to appreciate just how different the world would be if people treated their identities the same way they do their internet identities.

I mentioned the irony that an internet-only comic would be about an internet-free world, but what really fascinates me about this series is the way it embraces the medium. Martin has adapted to a digital-only environment just as well as the characters have adapted to their digital-free environment. Each “page” is laid out with respect to a practical, computer-friendly aspect ratio — a radical departure from the “more or less ignore that these might be read digitally” approach that most creators (and publishers) take to their comics. It makes for a dramatically different — and easy — reading experience, setting a brilliant example that publishers would do well to follow.

It’s an interesting premise, set in a fully-realized world, and deployed with intelligence and skill. It’s a fantastic first issue for what promises to be a singular series. Patrick said it right the first time: read The Private Eye.