Today, Ethan and Taylor are discussing Avengers Assemble 15AU, originally released May 8th 2013. This issue is part of the Age of Ultron crossover event. Click here for complete AU coverage.

Ethan: It’s always tempting to poke fun at other cultures. Humans seem evolutionarily predisposed to draw lines between Us and Them, and in the present, enlightened point in the development of our species, we like to use humor to act on that where our paleo-ancestors might have used a nice, big stick. Humor’s got more uses than pushing others away though; sometimes it’s a good way to navigate the gap between the familiar and the different, and to draw people together. All of this is a bit overblown for introducing this issue. What I’m really trying to say is that writer Al Ewing really went to town on those silly Brits in this issue.

Captain Marvel (Carol Danvers) is on vacation in London. Thanks to Ultron’s global takeover, she’s not getting a lot of sightseeing done. She comes across a civilian being threatened by a few Ultron sentinels, rescues him, and then tosses him into a fireman’s carry and bounces her way into a magically-powered safe zone at the British Museum. There she meets up with Dr. Faiza Hussain aka Excalibur, where the doctor is healing the steady influx of refugees. Upon arrival at the museum it’s revealed that the man Captain Marvel saved turns out to be Computer Graham (Graham Toulson), a British hero from the 80s. Also present in the safe zone is soccer-magic-wielding Magic Boots Mel (Mel Kapoor).

So when Captain Britain himself (Brian Braddock) arrives on the scene, the heroes decide to venture back out into the city to try to strike back against Ultron. All but Excalibur head out to assault Ultron’s local HQ – St. Pauls Cathedral. They power through the ranks of sentinels, including a few giant-sized versions, and confront the Oz, the Great and Pow- I mean, a giant Ultron-head, along with a thick crowd of guard-bots. Computer Graham infiltrates its consciousness, and the others press forward while its distracted. In the end, though, in what’s become a familiar episode, the heroes are picked off, one by one. As her last stand, Captain Marvel absorbs a vast quantity of energy spewing from the Ultron-head and uses it to destroy the enemy, the entire locale, and herself.

There’s a lot of great material in this issue, and it delivers a satisfying – and at times grim – installment in the Age of Ultron crossover, but let me get back to that later. Because first, I mean, wow, those Brits are HILARIOUS! Right, man? SO silly, what with their funny sayings, and their fixation on tea, and their goofy mythology, and oh man Captain Britain is, like, wearing the UK flag as a costume! So silly!

At least, that is the predominant message I got from this issue. I freely admit that I heartily enjoyed – relished even – every bit of the teasing. At the same time, Ewing lays it on so thick that the theme risked becoming the whole point of the issue, which I don’t think it’s supposed to be. Exhibit A: 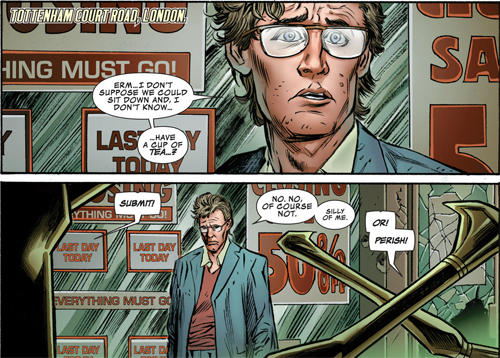 And in the very next panel, we get a Doctor Who reference when he teaches them to shriek “Ex-TERRRR-MINATE!” like a card-carrying Dalek. Just in case we missed our cue, Captain Danvers reflects on the magical nature of the safety bubble around the British Museum, saying “Magic’s big with the Brits… here, you have to choose between mystic swords and healing amulets in stone circles on a moonless night. Or that’s what they tell me.” The sweet, humble, double-edged character of Excalibur threatens to interrupt the guffaws, but Magic Boots Mel is introduced, and that’s that. First off, you have to understand that “boots” is the word those weirdos across the pond use for “shoes,” and second, Mel’s superpower is soccer magic. So, she’s really good at kicking things very accurately. And when she is dribbling a ball (with her feet! not the normal, basketball-sort of dribbling). She’s untouchable. The latter ability being pretty handy, though rather situational, and the former – well, I guess I don’t quite understand why you need actual soccer-magic to kick things in a specific direction. Maybe all soccer players have soccer-magic, then? What else aren’t the Brits telling us?

Long story short, this issue was very heavy-handed. It made the Canada jokes we get in China Mieville’s Dial H seem quite rare and measured. Thankfully, Ewing pulls short of open derision, and through it all lays out the story and dialogue in a way that’s fun to read. He even gives the heroes relatively decent deaths, which is more than you can guarantee in this crazy-depressing arc (Black Panther… you deserved so much better, man). Graham and Mel acquit themselves very well fighting an opponent far above their power level; Captain Britain only dies because his confidence-powered abilities falter as he mourns the loss of his compatriots; Captain Marvel goes out in a self-sacrificing firestorm, turning Ultron’s energy against it.

I haven’t addressed the art much yet, but Butch Guice is terrific. He’s juggling quite a lot – his reproductions of British landmarks like the museum and St. Paul’s are great nods to the change in scene, but he fits them into the Ultron-hellscape handily. The action during the fights works well, and I loved the 8-bit-showdown panels between Graham and the hive-mind (not to mention Ewing’s reference to BASIC – “10 kill people. 20 goto 10!” yessss). That said, my favorite panel is actually Guice’s re-imagining of the Black Knight: 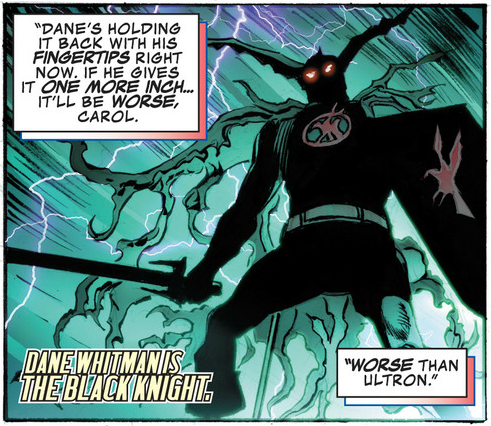 Just like the makeover of Magick’s Darkchylde persona in Uncanny X-Men, this glimpse at the Black Knight is a huge artistic improvement. In earlier appearances, the Black Knight has looked like a tool in some kind of Judge-Dredd-wannabe helmet; this more elemental, fae version is just one silhouette in one panel, but it’s still ten times better. Plus, Dane has that bad-boy, anti-hero thing going that comics have so much fun with in characters like The Void and Ghost Rider. I’m guessing this is more me projecting, but I hope the Knight and the Ebony Blade get a revamp and some screen-time soon. But regardless, I’m out of time.

Up next: Taylor! On a scale of “jolly” to “preposterous!” where do you rank Ewing’s commentary on British society! You’re a tea expert yourself – how awesome would a tea-party with the Dalek-trons have been? More seriously, how well did you think the balance of cultural parody and plot worked? What aspects of this issue did you think transcended the caricature and got your brain working?

Taylor: Ewing’s commentary on British society seems to be a little off this entire issue. Ethan, you mentioned the jabs that Dial H takes at Canada in some of its issues are more nuanced than what we see here and a I totally agree. But it goes beyond the commentary in Dial H simply being more clever. Canada has always been at the butt end of many jokes and so in many ways it makes sense for an American comic to poke fun at its neighbors to the North. However, the scrutiny that the Brits are held up to hear seems almost a little malevolent and given the tone of Ultron series seems more than a little out of place. Where as Dial H is a slave to its cleverness, the Ultron series has been a servant to despair and bleakness. Because of that, it seems odd that a jocular tone pervades this issue. I’m guessing that Ewing was hoping to pull off a tasteful homage to many of the things Anglophiles enjoy, but its so relentless it feels more mean-spirited than anything. A man is about to die but he’s British so he jokes about tea! How clever! Oh those Englishman, tea on the brain all the time.

Speaking of parody, I’m not sure if it’s limited to just the British in this issue. Throughout the issue we are introduced to the various main characters we meet with little title bars. These happen frequently and while somewhat useful for those who are unfamiliar with some of the lesser known characters in the Marvel universe, prove ultimately to be a distraction. At one point they are used to denote the the changing of the guard, so to speak, of the Captain Britain mantel. Later they are used again to denote Brain Baddock’s transformation to plain ol’ Captain Brian, a superfluous addition to say the least.

What’s odd about these introductions is that it’s unclear if they are being used as parody or not. Is Ewing poking fun at this staple of the comic book or does he think they are actually needed? It’s remains unclear throughout this issue what to make of them. On the one hand you have the jokes being made by Ewing at the English’s expense which sets a lighter tone for the issue. If this is the case, then indeed these captions would be considered parody. However, the issue gets quite heavy at the end with all of our heroes dying in their bid to stop Ultron. This dark tone would seem to suggest this issue isn’t supposed to be parody, therefore making the the captions legitimate.

I guess this gets to the heart of why I wasn’t thrilled by this installment of the Ultron series. The tone of this issue is nebulous and it never falls on side or the other. Is it light and fun or heavy and dark? While no issue of a comic has to be necessarily one or  the other, this one in particular seems unclear with what it wants to be. I enjoyed the tragic ending to this issue and found it to be the most convincing aspect of this installment but I wish it had been built up more without parody confusing things.

Ethan, you had mentioned that the art in this issue is quite good, and I agree. Butch Guice does an admirable job of rendering wrecked-up England and I enjoyed some of the unconventional paneling he employs for some of the sequences. In particular, and you mentioned this as well, I loved the 8-bit sequences used when Computer Graham is infiltrating the Ultron mainframe.

I’m a fan of anything that is rendered in 8-bit fashion so I instantly was pleased with these panels when I saw them. Also, it’s just funny to think that Ultron’s computer is using software that hasn’t been updated since about 1994. This is what conquered Earth killed so many superheroes? Yet while I liked the look of it, I still have to question is this is the right place to use it. Is this parody or is this tragedy?